What Do Snow Leopards Eat? Here is a list with descriptions and some photographs. The snow leopard, like any cat is a carnivore and as expected hunts local prey. A major snow leopard prey item (species) and one that immediately comes to mind is the bharral or blue sheep1–Pseudois nayaur2.

To get a feel for sizes, one of the biggest snow leopards that the Snow Leopard Trust has studied weighed 42 kg (92 lbs)3. A large young male was weighed at 39.5 kg (87 lbs). The blue sheep is a goat-antelope or caprid4. It is found in the high Himalayas of Nepal, China, Kashmir, Pakistan, Bhutan, Tibet and India. Adult male blue sheep weigh in the order of 33.3 kg (73 lbs)5.

Perhaps equal or a close second would be ibex (Capra sibirica). The distribution of both these animals coincides accurately with snow leopard range. A snow leopard will kill between 20 – 30 adult blue sheep per year, killing one every 10 -15 days and eating the kill for up to 7 days9. 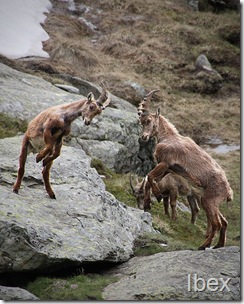 leopards also prey on marmot (genus Marmota) as mentioned above. The Himalayan marmot is found at elevations from 300 metres to 4,500 metres of the Himalayas. It is a type of ground squirrel the size of a domestic cat10.

Another prey species is the pika (Genus Ochotona), which is a small chinchilla-like animal. It has short limbs, rounded ears and a short tail11. Other prey includes hares (Lepus spp.), small rodents, and game birds. Historically the snow leopard preys a lot on domestic livestock (sheep, yak and goats for example), which results in retaliatory killing of the snow leopard by the farmers. This is where the Snow Leopard Trust is doing such fantastic and clever work.

They are working from the ground up (with the local people as opposed to with governments) to gain the local communities’ cooperation to create grazing free reserves where the natural habitat of the snow leopard and their prey can recover. The Trust has also set up an insurance scheme in respect of prey lost to predators12 and a very clever scheme in which livestock is protected from illness thereby taking away the pressure of dealing with the snow leopard (i.e. eliminating it) – see Clever Cat Conservation.

Snow leopard on mountain is hard to see. Photo by Saurabh Desai

What Do Snow Leopards Eat? —

What Do Snow Leopards Eat? to Wild Cat Species