This page explains what is wrong with a raw, cat food diet, which is growing in popularity. There are many potential benefits for a cat on a raw diet, but this page deals with the problems and detriments. 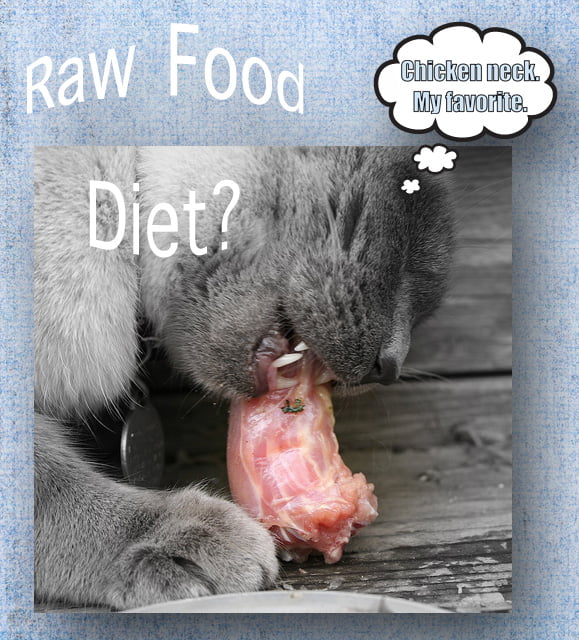 Note: raw meat diets are usually raw meat, bones, some vegetable material and supplements such as essential taurine mixed in. In zoos, it could mean the carcass of an animal.

Essentially, the argument against a raw cat food diet is that the benefits of a raw diet are outweighed or equaled by the downsides associated with its preparation and use.

{Side Note: it is said that vets like to support commercial cat food because they sell it – i.e. Hill’s Science Diet®.}

Also there is some doubt as to whether there really are the benefits as stated.

“a natural diet may not always be as healthy as imagined, and that even measuring nutrient values may not predict how a diet will perform after being fed for many months.”…(Role of Diet in the Health of the Feline Intestinal Tract and in Inflammatory Bowel Disease — Winn Feline Foundation)

Set against that, common sense dictates that a diet that closely matches a natural diet should be the best. Commercial wet and dry cat food can be far removed from “natural” food with grains, and high level of carbohydrates, for example.

What do zoos do? Apparently, in Europe raw feeding is commonplace. It provides mental stimulation for the cats as well as health benefits including better teeth and gums.

In America, it is less well accepted due to possible dental problems, foreign bodies obstructing airways, perforated intestines from bone fragments and poorly prepared food that is contaminated.

It appears that some zoo keepers believe that they can improve on nature. I am not saying they can’t, but I personally doubt it.

It seems that in the preparation and processing of a raw food diet the nutritional balance can be upset making it difficult get it right. For example, in the Winn Feline Foundation study it was thought that (a) bacteria in the whole ground rabbit diet and (b) the grinding down of the whole rabbit reduced the taurine content leading to heart problems in the cats.

Chewing bones is meant to improve the teeth and gums – better oral hygiene. Chewing bones can fracture a tooth and the shards can perforate the intestine.

The great problem under this topic is that there isn’t certainty either way. The situation is confused, it seems to me. This is a barrier to using a raw food diet for domestic cats.

Bacteria and Parasites in Raw Meat

Handling raw meat requires knowledge and it is probably fair to say that although lots of people will have that knowledge, many won’t. This is a barrier to preparing and feeding a raw cat food diet.

Bacteria and parasites are killed in the process of making commercial cat food due to the high temperatures used.

Some of the bugs that might be in raw meat are:

Will Your Cat Eat It?

PoC has tested this on one occasion. Dorothy ran a test on Nature’s Variety Instinct Frozen Raw Food. Her cats did not like it. There you are; something else that might be wrong with a raw cat food diet. Domestic cats might be too used to commercial cat food.

My personal view, in answering the question I have posed in the title, is that there are real downsides to feeding a raw food diet to your cat. Can they be overcome and do these negatives outweigh the positives which to some commentators are not clear cut?

Click this for some PoC links on this subject.