Grooming is advantageous to the domestic cat in a number of ways. It is important to the cat. That is why they groom a lot. Over-grooming should be investigated though.

Cats groom themselves for up to a third of their waking hours. They will groom several times in a day. Bearing in mind that a cat is asleep for about 14 hours per day, after grooming they have about 6 hours to do something other than snooze, sleep and wash themselves. It’s a tough life.

Oriental Shorthair (OSH) cats. The one on the right has a squint which is typical of the Siamese. The OSH is related to the Siamese.

Obviously grooming cleans the fur. The spinny tongue with keratin spikes combs the fur and removes dead hair and debris. Keratin is the same substance that makes claws.

The tongue can also scratch the skin as we scratch our skin if it itches a bit. Persistent licking to alleviate an itch needs to be investigated as there might be an health problem such as flea or food allergy, to mention two. An allergy caused by something in the air such as house dust can lead to excessive licking causing hair loss symmetrically down the back. Ringworm also irritates causing excessive grooming in the area. The grooming process is part of the life cycle of the tapeworm, interestingly.

A mother cat licking at her breasts may be due to caked breasts. This is an accumulation of milk in the mammary glands during lactation.

Painful urination caused by urinary tract disease may lead to licking in the urogenital area. 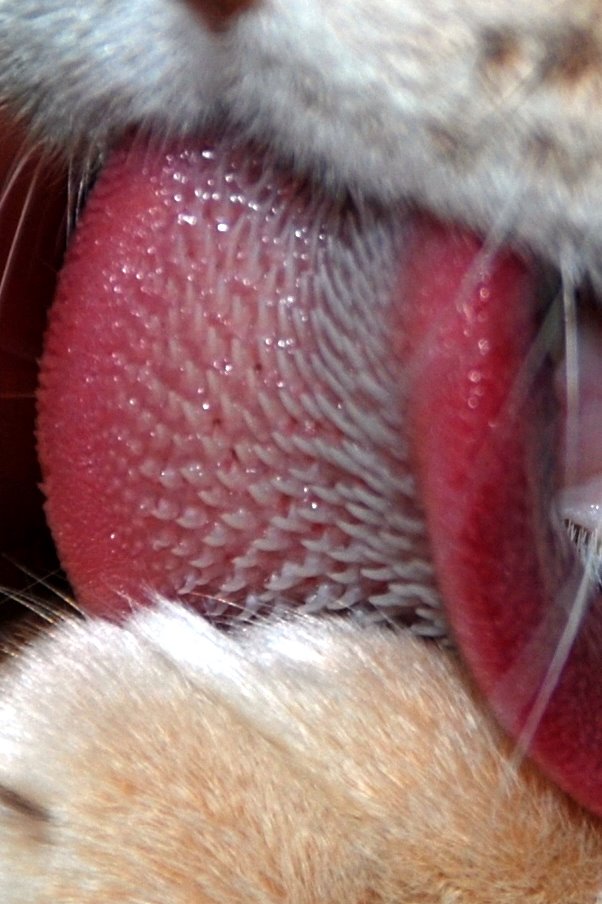 The saliva deposited on fur evaporates and cools acting like perspiration. The science behind this effect is called the latent heat of evaporation or the latent heat of vaporization. When grooming themselves cats sometimes tug on the fur to stimulate glands in the skin that release an oil to keep the fur waterproofed. Licking the fur also keeps it smooth making it a better insulator. There is a substantial element of temperature control in the grooming process.

Cats tend to follow a routine when grooming themselves. By routine I mean starting and finishing at the same places and grooming in an organised way. Suppleness is required to groom properly. Some parts of the body are very hard to get to. This is a good reason why cats should not be overweight. Obesity prevents a cat getting to those difficult parts.

Geriatric cats cannot groom properly and their fur can look unkempt and become matted. That is when we step in.

Overgrooming is due to anxiety it is thought. Grooming also serves the purpose of feeling good. It is a pleasant thing for a cat to do. Perhaps “pleasant” is the wrong word. It is reassuring for a cat to groom. If she is feeling anxious about something, grooming helps. This can lead to hair loss and the hair loss is usually from the areas of the body that are easiest to get to, namely, the rump and hind legs. All the fur is ingested and passed as feces. Sometimes it is thrown up as a hair ball. Rarely it can form a blockage in the gut.

Female cats and male cats groom for the same time. There is obviously variation between individual cats. Cats with very long fur, usually cats belonging to a cat breed (i.e. purebred pedigree cats) such as the contemporary Persian, are unable to groom themselves to a sufficient standard to maintain the fur in proper condition. People have to assist. This is one reason why extreme breeding is wrong.

An aspect of cat grooming that upsets some people is the fact that a cat grooms her bottom. Some people still make a connection with this and the devil. The ancient connection between witchcraft and cats lingers on.