↓
Home→Uncategorized→A little Jynx and Serenity in my life

A little Jynx and Serenity in my life

Serenity and Jynx in all their glory

I was a first time cat owner. She was a beautiful calico cat. I had her since she was 4 months old. She was my joy in life. She ended up getting pregnant. I was a little nervous and upset about this at first, but as the months progressed I noticed I was becoming so excited about this new experience I would take part in.

It was October 13th..which would have been on a Friday that year of 2006. I went to the movies with some friends to see this new horror movie I was dying to see. My room mate called me and told me that Samara was acting really weird and kept circling my door and wanted to go into my room. 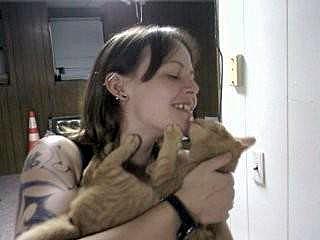 So I told him to let her in there as it was probably going to happen soon, but to text me or call me no matter what once it started happening and I would rush home.

I settled into the movie, and it was about half way through he texted me and told me she had just given birth to her first kitten. I jumped up and hurdled through a whole row of people in the theater, ran out the door and sped down the highway to my house.

I look back on it now and realize that, that was not the best thing to do, but it was as if I was a father and found out my spouse was having a baby! I thought of nothing else but to be there with her. I ran inside leaping over 3 steps at a time to get into my room, and I saw Samara laying there with her first miracle laying beside her.

I did everything I could to make sure she was as comfortable as she could be. I laid there next to her, petting her, soothing her. I felt her start to have contractions and she started to cry. I reached my arm out to her, she laid her head in my arm as she continued to deliver. And I saw that even though she was in so much pain, she was at peace knowing I was there for her. 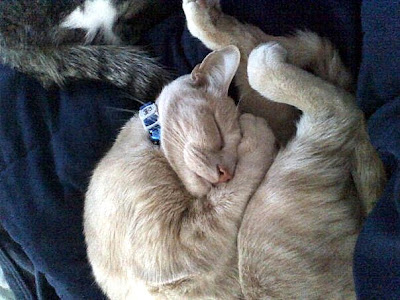 I had to help deliver her one. Had to help with the cord and all. It was a very disgusting and messy process. But when it was all done I laid there with her with the biggest smile on my face.

I kept a nice place for her in my room. I had never owned cats before, but for some reason when this miracle happened, I knew exactly what to do. I woke up the next morning freaking out. I could not find the kittens. I tore apart my room, hoping she did not take them into the closet where there was a lot of junk that they could get hurt. I tried to kitty proof it before she had the kittens but as we all know, cats are very sly with the things they can do.

But the last place I looked was up against the side of my bed, under my comforter by my pillow. My bed laid on the ground so I was pretty close to the floor. But I pulled back the covers and there they were, all laying together right next to where I slept. 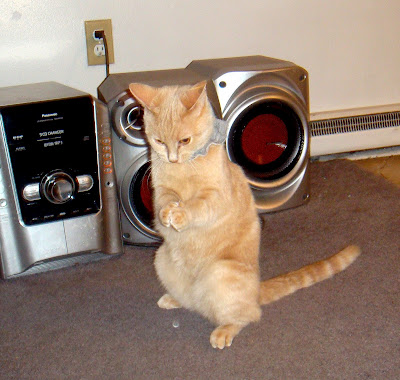 It warmed my heart knowing that Samara felt so comfortable with me that she had to have her kittens with me at all times. I could tell you a million things about the next couple years with them. There is just so much.

But the most important thing is, I was there with them from the time they were born, till now. They are some of the friendliest cats you will ever see. They do not have the typical temperament that cats have. The ill deal with me when I WANT to deal with them. If I call them, they come. If they are doing something bad and I look at them and point a finger, they stop what they are doing, look at me..meow and run away from what they were getting into.

I had to give Samara away 2 years ago. It broke my heart but she was going into a better home. She was more of an independent cat. But my two, Jynx and Serenity..I have fought tooth and nail to have by my side. They are my kids. My friends tell me at how sick it is about the relationship we have together. They are spoiled, but not to the point that is bad for them. They know their roles and what they can and can not do. Jynx which everyone knows I have taken a special bond to, she is a beige colored cat..a color I had never seen before.

But she is the ruler of the house, and she lets everyone know that she is mommies little princess. Serenity is my little vocal bundle of joy. When I come home from work, they meet me at the door, meowing and so happy to see me. As soon as I sit down they have to jump on my lap and cover me in kisses the same way a dog would to his owner. That was one of the coolest tricks I taught them when they were kittens. And to this day it still gives me butterflies when they smoother me in love. They are my life and everyone knows that if it were not for the two of them..i would not be here today.

They are my reason for waking up every single day, to continue on when everything around is getting so hard. I had lost my home, and instead of giving up and sending them to a shelter I did what I had to do to give them a good home.

They are my heart, my soul. Without them..i really am nothing. Some don't understand it. Others get it. But it really does not matter. Only what matters to us. Its been 3 years and they never cease to amaze me. My little Serenity will sleep with her face directly into the floor, or couch..pillow etc. It is the cutest thing i have ever seen. They rip and terrorize through the house and keep me on my toes. They are the biggest joy in my life. And I am so blessed I have to opportunity to experience this.

Thank you for reading

A little Jynx and Serenity in my life to Moggie cats