After studying many articles on the internet concerning what we feed our pets, plus all of the pet food recalls, I’ve made some changes in what I feed my cats Furby and Lola. One source of information is the book “Food Pets Die For” by Ann N. Martin.

Between preservatives, flavor enhancers and meat-by-products and then add the lists of safe brands (every source seems to have a different list) I’ve taken a hands on approach to my cats nutrition. I’m like most people and been in the dark over some of the junk that goes into cat food as meat by products. Dead animals, diseased animals, fur, plus countless other disgusting things I don’t even want to think about-much less feed my cat. Some argue that feral cats are accustomed to eating dead animals and yes that is true. But it’s usually a fresh kill and they eat the meat and organs. If you’ve ever been given a carcass “present” by your cat you’ll usually find the fur left intact.

The first change I made in Furby and Lola’s diet was to add raw apple cider vinegar. This is the kind you purchase in a health food store. It has to have the “mother” much in the same way yogurt must have live cultures. Regular cider vinegar just isn’t the same. I mix this 50/50 with water and squirt a few drops into the mouth. I haven’t quite figured out if they like the taste but at least they don’t run from it.

Cider vinegar has been used as a natural remedy for centuries for about every ailment known to man so I feel safe in giving my cats a small amount every day. I also have a spray bottle mixed with this as a flea repellent/skin conditioner. If the cats lick it off that’s great too.

The second change I made has mostly affected Furby because he was so ill and malnourished when I found him. My thumb and index finger could circle his belly. I won’t lie to you. Lola eats mostly commercial dry cat food. She was a healthy kitten when we brought her home and she is turning into a healthy cat. She’s really not into table food. 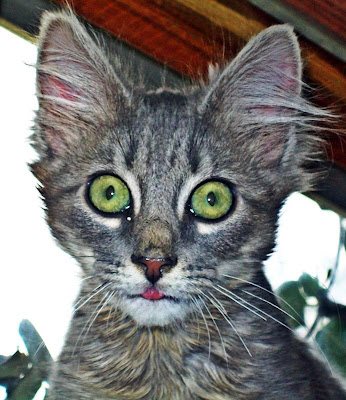 Furby is a different story. He’s a spoiled little monster who thinks he’s supposed to eat whatever I eat on the same plate I eat on. So that’s the way I feed him. Almost every night we have chicken (the good kind-not the kind full of antibiotics) baked in the oven. We also have 2 vegetables and whole grain bread.

Furby began by trying to take over my plate and I quickly learned to rake his portion to one side and he’d leave my side alone! I know what is going into his growing little body. He loves green beans, peas, carrots, brown rice, whole grain bread and plain cooked oatmeal.

Tonight he had garbonza beans for the first time. I make sure he gets extra protein since he’s still growing. I’ve read up on foods NOT to feed him so I don’t accidentally make him sick. He is steadily putting on weight and I can feel muscles developing. His coat is silky and shiny and his eyes are bright and clear.

The picture above shows Furby on November 3, 2009 the day I found him. The picture on the right was made January 12, 2010. That’s a lot of progress made in only 2 months. The picture in the middle is the one with a funny story behind it. I took chopped boiled chicken, pinto beans, English peas, brown rice and oatmeal and cooked it all together on the stove. I opened a few omega oil capsules and added them. None of the foods I’ve given him have caused diarrhea, vomiting or anything else. The picture of the food was made with my cell phone as a joke. It smelled OK but I wouldn’t eat it even if someone dared me. The cats LOVED it. They ate on it for three days then I gave what was left to my dogs. They loved it too. I’m going to cook them up another batch of it again soon.

If anyone else has a special homemade recipe I’d love to have it. Our cats deserve tasty healthy meals as much as we do.

A Personal Choice On Cat Food to Best Cat Food