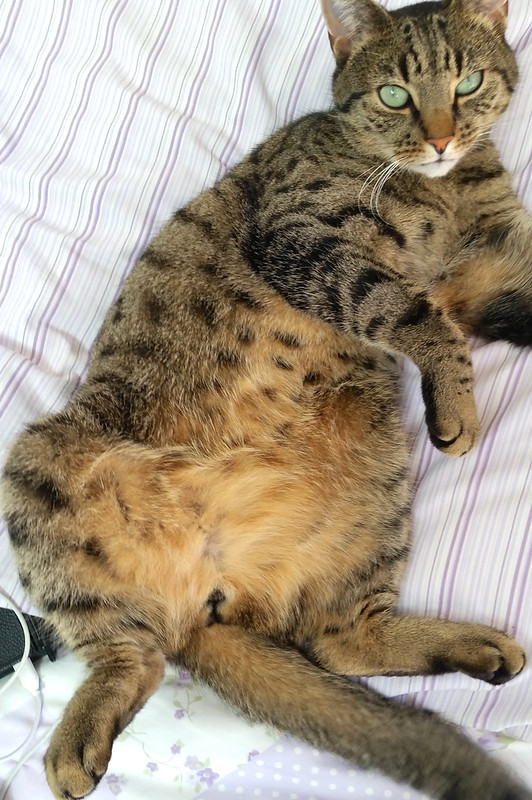 The cat in the picture is my companion, Gabriel. He is belly up but he would have done it whether I was there or not. It was not an invitation to pet him or anything else. It was just comfortable for him to be like this.

The belly-up position of a domestic cat is called a ‘cat hug’. I am not sure why except that it is position which makes the cat very vulnerable. Jackson Galaxy says it is called a cat hug because it is the ‘closest you will get to a cat actually hugging you’. The point he is probably making is that it is a sign of trust and therefore friendship.

The posture clearly indicates that she is very relaxed and confident in your company. However, it is a mistake to automatically assume that it is an invitation to rub her belly.

When your cat presents her belly to you there is an urge to touch it! It is so nice to touch and stroke or even kiss (a lot of people do this, I’ll bet). However, my experience tells me that you should not touch the exposed belly unless past experiences indicate that she accepts it or likes it and that you do it gently. A lot of cats like it in fact. I can be quite firm and he still likes it but there is a limit.

Domestic cats can get a bit twitchy when their belly is touched. It depends on the individual cat, of course, but some cats will roll up and bite, albeit normally gently. This may be a play response.

For a predator to make themselves so vulnerable is unnatural. Predators need to be dominant. Although the cat is a top predator they are also prey to larger predators. I guess we as cat owners can take up that role. Therefore to expose their belly to you is saying that they are totally vulnerable to you. Theoretically from the cat’s standpoint it could lead to being badly injured. Therefore it must be a sign that she trusts her owner.

However, as mentioned, it is not an invitation to touch! You should appreciate the ‘cat hug’ from a safe distance unless your relationship with your cat includes belly rubs.

Kittens do the belly up posture as a ‘play solicitation’. It is a signal to persuade littermates to play. But this not the case, apparently, for adults. Kittens do this from about six to eight weeks of age. Rearing up on hind legs (‘stand-up’) is another signal. Bradshaw says that kittens use their ‘play face’ to tell littermates that they want to play and not fight.

It has been suggested that adults cats can take up this posture for defensive purposes as it makes their teeth and all four paws available for protection. I’d have thought that this is rare.