The African Golden Cat is a medium sized cat and can grow to 90cm in body length and weigh up to 18kg. Although its name implies a golden coloured coat the golden cat is polymorphic – its base coat coloration varies extensively depending on its location -ranging from a golden/reddish brown to slate/silver grey. A report of a golden cat in captivity even suggest that the base colour of the fur can change from one colour phase to the other over a period of time depending on the age of the cat and various environmental stimuli. The under sides of the chin, chest and abdomen are usually lighter and in some cases almost pure white – in some individuals the head and body is spotted. Its long tail, which measures up to 40cm, is marked with dark line along the top and ends in a brown or black tip. The head caries distinctive light markings around the eyes and above the mouth – the small ears are dark coloured on the rear face.

Studies made in the late sixties found that although both red/brown and grey/silver phases were found equally in most parts of the range, distinct variations in coat markings, such as overall spotting or spotting on the back, were found to be restricted to West African locations. Golden cats found east of the range however, appeared more uniform in colour, carrying only spotted markings on the sides or belly. It was suggested that the two groups represent separate subspecies – Profelis aurata celidogaster found in West African regions and Profelis aurata aurata from Central and East African locations. As many as 4% of golden cats studied were found to be melanistic and were located throughout the range. 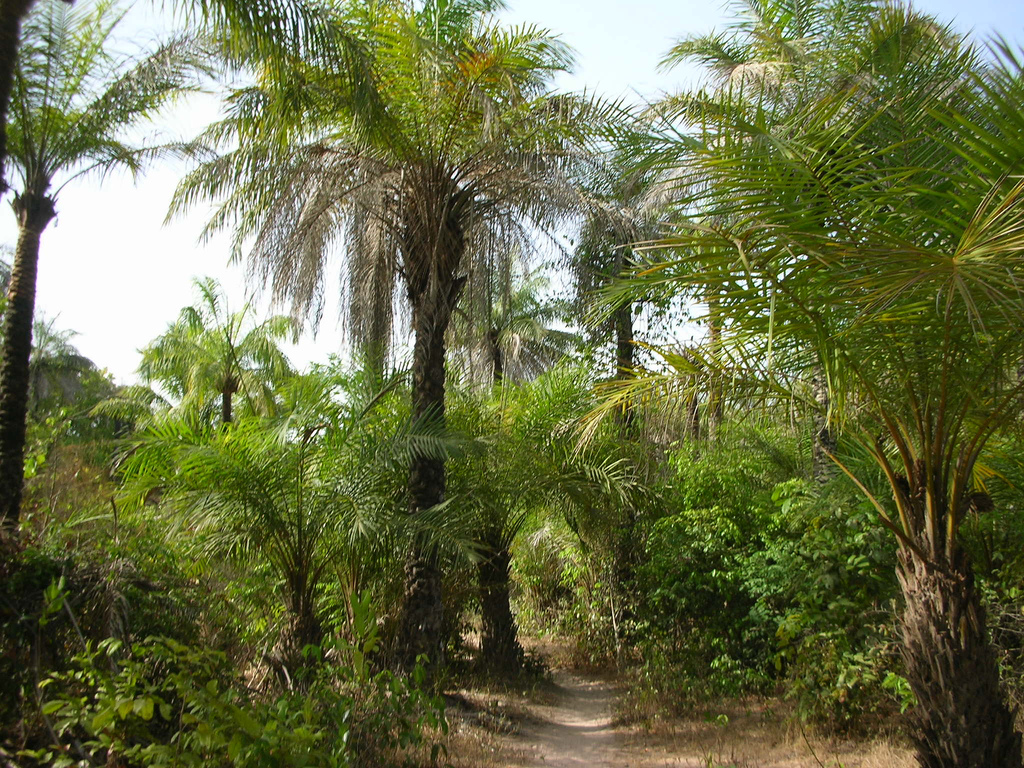 Above: Forest, South Senegal, Casamance region – Photo by Manogamo. An example of the habitat.

The primary habitat of the golden cat appears to be the Tropical Rain Forest belt which traverses the African equator, however penetration into the adjoining tropical Dry Forests and Savannah scrub is also in evidence. To the east of its range in Uganda the golden cat has been known to inhabit regions up to 3500 meters and be present as far east as the Mau Escarpment in western Kenya. Although the golden cat is said to prefer virgin forest, reports from around the Bwindi Mountain Gorilla National Park in South West Uganda suggest that the cat is equally at home in secondary forest areas where logging activities had led to an initial decline in many of the herbivore prey species and an increase in human activity.

Primarily due to its dense rain forest habitat very little is known of the lifestyle and biology of the golden cat. Most reports suggest that golden cat is a solitary and crepuscular hunter but sightings of a golden cat stalking the mainly diurnal black-fronted duika in South West Uganda suggest that the cat may well be active during daylight hours in parts of its range. Apart from duika and other small antelope it is thought that the main part of the golden cats diet is made up of rodents, tree hyraxes and birds. There are conflicting reports of the golden cat foraging close to human habitation – sources around the Bwindi National Park in Uganda have confirmed that the preying on domestic poultry and livestock is common, whilst research in the Tai National Park in the Ivory Coast suggest that domestic predation is a rare occurrence. Small monkeys are also known to be taken by the cat which may suggest that although thought of as mainly terrestrial , the golden cat is also active in the lower branches of the forest canopy and can climb well.

The little that is known of the golden cats biology and reproduction is gained from captive bred animals – the litter size is small, usually consisting of 1-2 young and are born after a gestation period of approximately 75 days. The kittens have a daily weight gain of approximately 30g per day and are weaned at about 14 weeks – the golden cat reaches maturity at about 18 months of age.

Although local tribes’ people hunt the fur and especially the tail of the African golden cat for ceremonial use, hunting does not provide a major threat to the golden cat. However through a gradual increases in the timber trade, loss of the Tropical Rain Forest habitat and subsequent decline in prey species is a threat in many parts of the cats range.

The African golden cat has an IUCN status of Insufficiently Known and due to its relatively restricted natural habitat must be considered at risk until more data is available as to its true population and distribution.

These African golden cat facts are correct at about 1990. The status in the wild may well have deteriorated since this article was written primarily due to habitat loss due to the commercialisation of Africa.

See an alternative longer and fuller version of this page.

See a page on this cat written for kids.