The African golden cat is a small/medium sized wild cat of a variety of colors that lives in the band of forests of equatorial Africa that extend from the west coast of the African continent (Senegal and the Gambia) to the east coast (Kenya). There is a gap in this band at Benin and Nigeria. It is thought by the local people to follow the leopard around. Despite living in forests, it lives on the ground. This cat mainly feeds on small mammals and birds. Our knowledge of this secretive cat species is limited. It is threatened by commercial activity and deforestation.

The African golden cat also has the name “golden cat”. The scientific name is Caracal aurata indicating a close relationship with the Caracal (scientific name Caracal caracal ). It is also close to the Serval (Leptailurus serval).

This cat is about 31 inches long plus a tail of about 12 inches in length. The fur is cinnamon or reddish brown. The African golden cat resembles the Caracal. Local people think of this cat as fierce and that is follows the leopard. This belief has resulted in it being killed for its skin which is worn to provide good luck when hunting or to wrap valuables etc. (sad for the cat don’t you think?). The name of this cat is similar to the Asian counterpart, the Asian golden cat but there seems to be no connection. However, molecular data reveals that the Caracal Caracal caracal and the Serval Leptailurus serval are closely allied with this cat2.

This wild cat species is about twice the size of a large domestic cat1 weighing between 8 and 16 kg. (17.6 to 35.27 lbs – pounds). Perhaps the description “golden” is a little misleading as this cats color varies from marmalade orange to a sepia-grey. The coat can be spotted or not and it seems that the cats of western Africa tend to be spotted, whereas those from the east are unspotted. There appears to be two “distinct races”. Although this is not accepted by everyone. The coat color would appear to change based on observations of a captive animal.

The face of the African golden cat is round with a distinct muzzle. There are no stand out facial markings. The tail is short (indicating that this cat is not a specialist climber?…but this cat lives in all kinds of forest)

Photographs are rare. The one below is from Webshots and is the same picture that illustrates the description of this cat in Wild Cats of The World:

Below are photographs that are meant to be of the skins of this beautiful cat. The coats are spotted and although the photos of this cat appear to indicate a plain fur the color phases “may be spotted all over, unspotted or…in-between” (Wild Cats of The World): 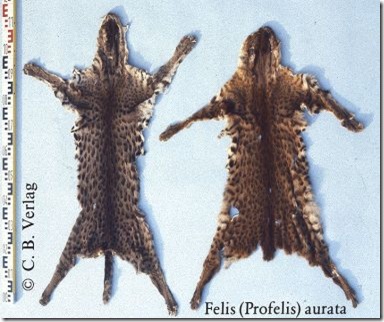 This image is from the Wikimedia Commons file. User: Mickey Bohnacker, Presse-Fotograf, Frankfurt/Main. The scientific name in the photo is the previous, earlier name, now upgraded. Note: I am not sure that these skins are as stated however. I am investigating. – update: This cat can have spotted fur and accordingly they are probably of this cat and remain on the page as a reminder of the hideous trade in skins. As mentioned, the skins of the African Golden cat are also used by the local people in Cameroon (pygmy tribes as at 2002) for wrapping “valuable objects” and during “circumcision rites”1

The cat’s classification under IUCN Red List of Threatened Species™ (Red List) is Near Threatened (NT see above). This classification as to survival is in part based on a population decline over the last 15 years of 20%. The assessment would seem to be a little less than absolutely reliable as little is known about this cat species and IUCN Red List themselves admit that there is a need for further work on population levels.

The figures above are from IUCN Red List and are based on reliable estimates. The present figure in the graph is a lower estimate. This cat species would seem to be on the brink of being reclassified to “Threatened” because of the population decline. The reasons for the population decline are (they relate mainly to West Africa):

This wild cat is rarely seen alive but skins are seen in bush meat markets and as decoration.

This is shown on the map below, the data for which originates from the Red List website. The map has been carefully prepared. All the wildcat distributions are either changing or are sometimes based on incomplete information. The map below can be amended by people who are willing and able by going to Google My Maps, here’s the link which opens a new window (but please respect the existing map): African golden cat geographic range.

This map can be seen in large format with more on the geographic range here: African golden cat geographic range. If you click on the blue flags, you will see more information and pictures. All wild cat range maps need continual input from people on the ground who know. Can you help? This map can be amended. Simply click on the above link to find out.

This cat’s habitat is the forests of Equatorial Africa. The countries that the range covers and where the cat is native are:

It is uncertain if the African Golden cat occupies these countries:

This is Africa’s only forest dependent species of wildcat. The cat’s primary habitat is moist equatorial forest and occasionally savanna on the edge of the forest. Relatively little is known about this wildcat. This might be the least understood of all wild cats. In one survey of African golden cat scats (feces) in the Ituri forest of the Democratic Republic of the Congo prey was made up of 70% rodents. As the habitat of this cat is shared with that of the leopard the diets overlap but this cat’s diet is more dependent on birds and rodents. The prey generally is assessed as follows (in order of preference):

The treats to this cat’s survival in the wild are ,as usual, almost uniquely due to human activity:

Listed in CITES Appendix II, which means, “…species that are not necessarily now threatened with extinction but that may become so unless trade is closely controlled.” (quoted verbatim for accuracy). CITES attempts to control the trade in animals and animal parts.

In regards to conservation, hunting is prohibited in:

However, how good is enforcement? And the major threat is loss of habitat so prohibiting hunting probably has limited impact on conservation. In June 2018 it was reported that the government of Congo was opening the famous Virunga and Salonga National Parks to oil drilling. Twenty-one percent of the park will be declassified allowing commercial activity. This is a classic example of how commerce erodes the survivability in the wild of these special wild cat species. It will only get worse in Africa. Africa is being exploited by the Chinese to dig up metals etc. for their burgeoning manufacturing businesses.

1. Wildcats of The World by Mel and Fiona Sunquist — 2. IUCN Red List.