Yesterday, and this morning, I shared an enclosure at A1 Savannahs, with African serval cat Serena in order to try and take some nice photos and to make some video material. One video is made and there is another in the pipeline. The still photos are here. Two of the photos below were taken in the early morning light as can be seen. The centre photo was taken in the bright midday sun.

I also wanted to be close to an African serval to try and understand the difference between a wild cat and a domestic cat. Although, in the USA, the serval is not uncommonly domesticated or at least treated as a house cat. My interesting and pleasant experience with Serena informed me that this species of cat is not suitable to be a house cat, in my considered opinion. I am thinking about it from both our and the cat’s point of view. 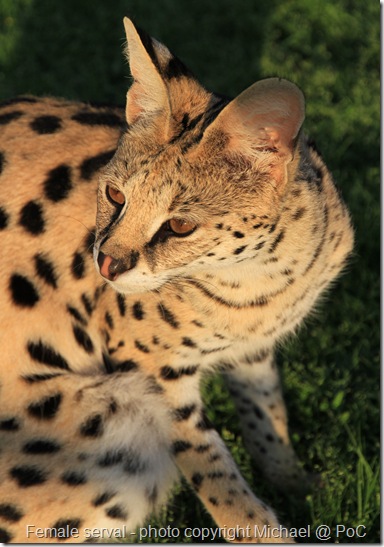 Why do I say that? What are servals like? I am talking about servals that are to a good extent domesticated. Serena was rangy and about the size of a largish dog. Males are bigger.

As she did not know me, it took a while for her to understand that I was not hostile, the opposite in fact. As expected, at the beginning, she was cautious and ready to give a few hisses. 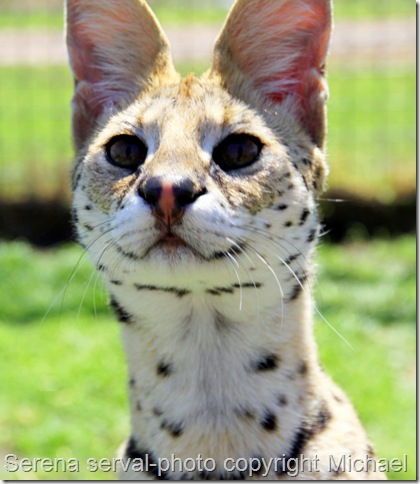 Her previous owner was around so she came into the cage to try and smooth  the introduction. After about 15 minutes Serena sniffed my offered hand and began to feel more at home.

But we have to respect the cat. On this experience the serval, albeit tamed to a good amount is still distant, the cat is still nearer to the wild state. This creates a healthy amount of suspicion about the human and rightly so. Serena, then played safe but in the time honoured way she responded to a cat tease (a stick with a feather at the end) just like a domestic cat except….

She is much stronger and pounces onto the tease and grabs the tease in her teeth far more forcibly, which is exactly as expected. Not only that she covers the ground very quickly so if the tease is about 5 yards from her she will get to the tease in a split second and pounce on it with force. You have to be ready. On one or two occasions she jumped at the tease and banged into me and the camera while going for the tease. That was no problem for her but I felt it, believe me!

In short when you are close with a serval you are very close to the wild. Personally, as mentioned, I felt that she was more distant emotionally and mentally from me than a domestic cat. Tomorrow I will show you some pictures of a male serval and his female partner.

It has to be said too that as these are quite large animals we have to be cautious and respectful. I felt a little bit edgy in that cage. You don’t completely known what might happen next and if something untoward did happen it would have been my fault completely. I am intruding on her space. The camera, however, did not phase her at all.