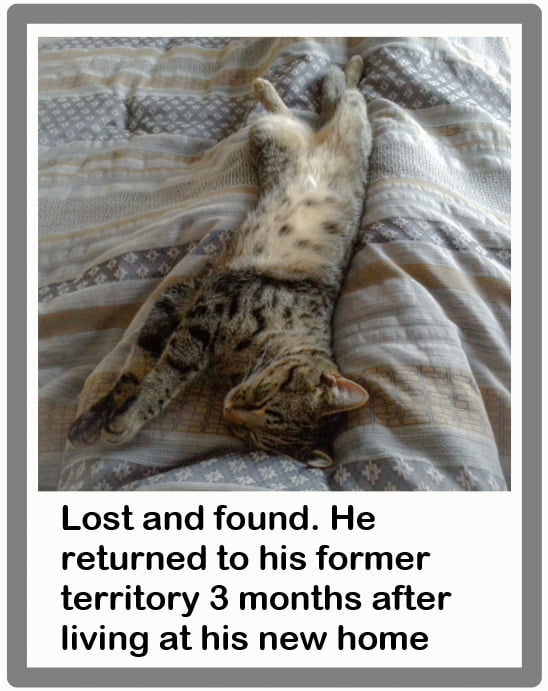 After three months in my new home my cat, Gabriel, decided to go back to my previous home to visit his previous ‘home range’ which is about half a mile away. That’s not far but the route is complicated. It is not direct. It goes to prove yet again that cats have great homing skills. He must have a great sense of direction and a good memory because this is after three months.

I lost him about a week ago. I was very distraught. I searched high and low. I did all the usual things that one does to find a lost cat including going back to my old address three times without success. I had decided that he had probably been killed by a large fox who frequents my garden. Although this would have been exceptional it does happen and it could happen. I felt guilty. I felt it was my fault. It was difficult processing it mentally to try and ease some of the massive discomfort that I felt.

I then ended up speaking to a previous neighbour at my former address and a friend of hers said that she had seen my cat. She knew my cat because she had seen him many times before. Therefore this sighting was excellent and believable.

I bought some prawns for my neighbour and gave her one of my cat’s food bowls and asked to put it out when she was sitting at the window so that she could watch to see if my cat turned up.

Amazingly, within the hour he had turned up. I had barely got home and showered and got myself organised before I received a telephone call to say that my cat was outside this lady’s flat. She also said that he had been hanging around my previous home (a neighbouring flat).

I raced around there and called his name. He responded with his typical cries. He comes when I call is name. He came out of the undergrowth. He was hungry. He was nervous and very cautious. He was semi-feral even though he had only been living wild so to speak for about six days. Although, he was born in the wild and therefore it is probably easier to return to that state.

While he was eating his prawns (he was very wary) I grabbed him and put him into a carrier provided by the owner of my former home! I got well and truly scratched doing it because he hated it.

As I dictate this Gabriel is on the bed with me in deep slumber because he is exhausted (photo above). I couldn’t be happier. I needed to believe that he had been killed because it was too hard to think of him struggling in the urban jungle. Although he wasn’t struggling that much because he is a very competent hunter and the weather has been good (he was born feral). Of course he knew the area very well because he had been raised in that area. Therefore I was probably overanxious but what else could I be?

I now intend to build an enclosure around my garden so that he can be an indoor/outdoor cat but the outdoors must be confined to the garden. I hope that he accepts it because I simply cannot live with the knowledge that he is out there somewhere in suburbia, struggling to survive and in perpetual danger. So I am building an enclosure for my welfare! It is the only way I can live with looking after my cat who is domesticated but barely so. This presents new problems which I have not faced before.