I am going to address this subject in a very simple and direct way without going over the animal welfare laws of each European country because I believe I can short circuit the process in producing the general information.

In 1992 the European Convention for the Protection of Pet Animals 1987 (a treaty) came into effect and twenty-three European countries are signed up to this treaty. It is an agreement between countries and it is very specific on killing pets which of course includes cats.

Each of the 23 countries concerned will also have their own national legislation which reflects the convention (is consistent with it) or they should have. The countries are: Austria, Azerbaijan, Belgium, Bulgaria, Cyprus, Czech Republic, Denmark, Finland, France, Germany, Greece, Italy, Latvia, Lithuania, Luxembourg, Netherlands (not ratified), Norway, Portugal, Romania, Serbia, Spain (not ratified), Sweden, Switzerland, Turkey and Ukraine. 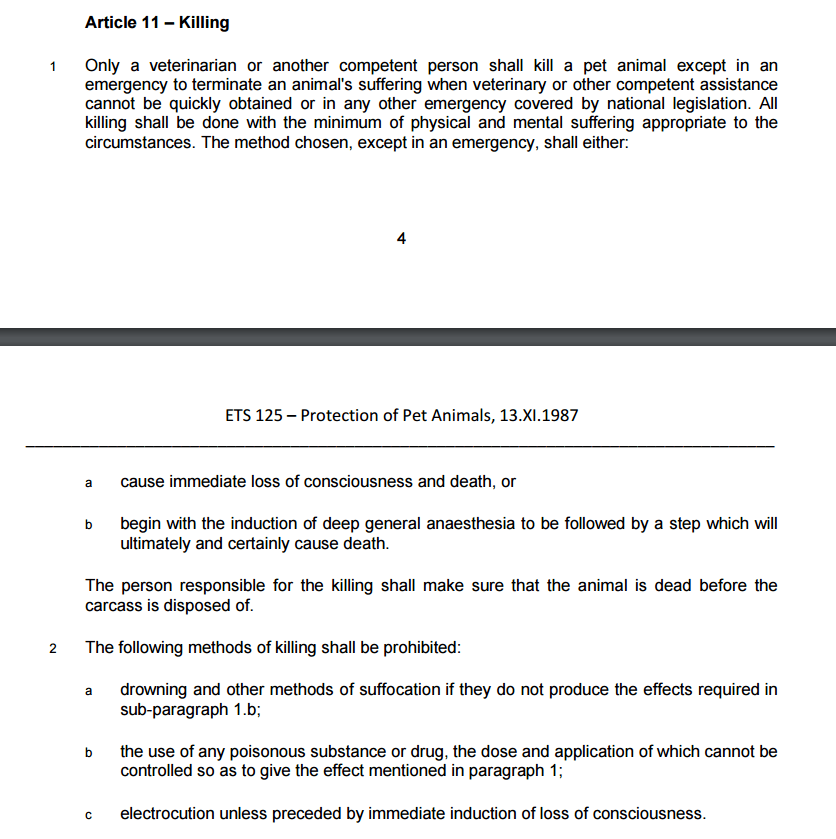 European Convention for the Protection of Pet Animals concerning killing

Above is a screenshot of Article 11 of the convention which is very specific on killing pet animals. Only a veterinarian or ‘other competent person’ can kill a pet animal except in an emergency. Even then there shall be the minimum of suffering. And the chosen method ‘shall’ cause the immediate loss of consciousness and death or the animal must be put into a deep general anaesthetic and then the next step will be death. Drowning, poisoning and electrocution are prohibited for the obvious reason that it causes suffering.

Shooting therefore is allowable in an emergency provided there is the minimum suffering. My interpretation of this is that you cannot shoot a cat at a distance to kill him/her. That would almost certainly cause unnecessary suffering. I mention that because I am often lectured to by cat haters about shooting cats in the USA. Cat haters are often wrong on the law. Although they might be correct about what happens on the ground because of poor enforcement.

What about feral cats in Europe? Well they are not covered by this treaty. Therefore they are not protected by it. However (a) the laws of each of these countries may well provide some protection (e.g. the UK does) and (b) feral cats are automatically protected to a certain extent because it is sometimes impossible to tell the difference between an outside domestic cat and a semi-feral cat. Therefore you can’t carelessly kill a cat presuming he is not a pet because you could be killing a domestic cat and breaking the law.