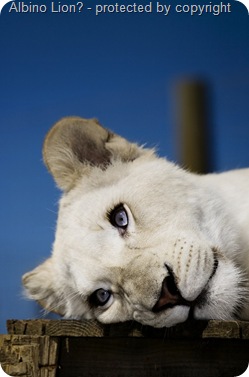 In discussing the Albino lion you have to discuss white lions and the genetics behind white cats generally. This is because there are possibly four types of white lion or at least two, in any event, and when people search for “albino lion” they may be searching, in fact, for “white lion”, which is strictly speaking a different thing.

The Sunquists in their magnificent book, Wild Cats Of The World, the number one book on wild cats, say that albino lions are occasionally found in Kruger National Park. They go on to say that three white lions were born in 1975 in the Timbavati National Reserve, Transvaal (Chris McBride’s book The White Lions of Timbavati). These two statements possibly refer to different types of lion and I am not sure that the Sunquists had intended that to be the case.

I am not sure that the white Kruger lions are albino despite the fact that author Chris MacBride says they are. The information that I see is conflicting. Its scientific name is panthera leo krugensis. The Timbavati and Kruger reserves are adjacent to each other (see map below). 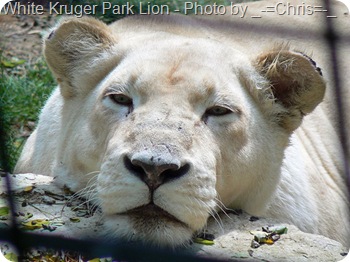 The lion above is a “white lion” and not an Albino lion.

In reference to domestic cats (and there is a natural relationship between wild and domestic cat) in theory there are four ways that a lion could become “white”. And when people say “white lion” they sometimes mean a very dilute tawny colour, which is a kind of off-white (see lion immediately above). The four different genes are:

It is said that the white lions of Kruger National Park and the Timbavati National Reserve are due to case (A) above – dilution (src: Wikipedia – the author calls this gene, “the chinchilla mutation” after chinchilla cats that have this grey dilute appearance). The lions are therefore not true white as would be the case for the albino lion or the other cases above (A – C). 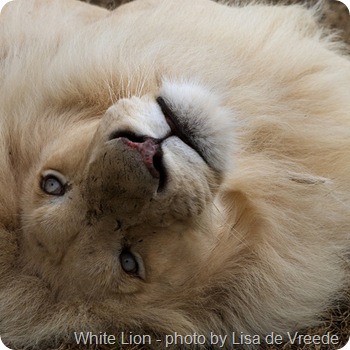 As can be seen, this is not an albino lion, just a diluted colour lion.

White lions and tigers are bred in captivity because they are popular attractions. However, because the gene is recessive, inbreeding needs to take place to produce white cats and when inbreeding is overdone it produces deformities and ill health (immune system suppression). This is not explained to visitors.

To recap, albino lions are rare and the term probably means the white lion, which is a lion that has turned a lighter shade of colour because of a gene that causes colour dilution. Sometimes the phrase refers to a true white lion that is white for a number of other reasons and not just because the cat is an albino.

Here is map showing where the two reserves mentioned above are: