The owners who call themselves the Bearded Man and The Lady (pretentious) opted out of surgery initially. The eye condition required medicine to stay pain free. 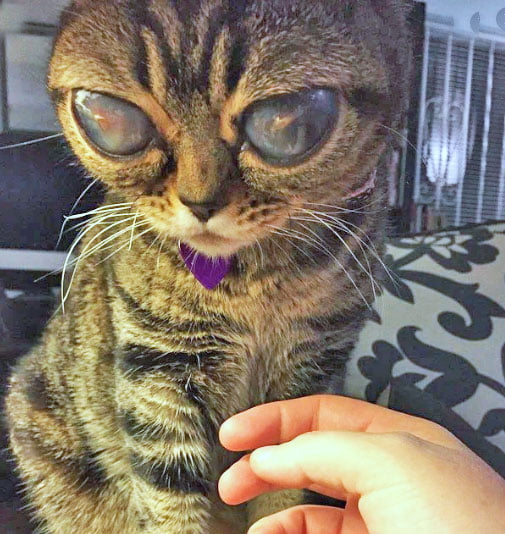 On their website they wrote that as they were dealing with their cat’s eye condition sometimes Matilda would become withdrawn and sad for a couple of days. Sure signs that she was in pain. This was in August 2019.

A specialist veterinarian said that she suffered from glaucoma. Matilda’s owners set up a crowdfunding site to pay for surgery.

Posts from 11 weeks ago on Matilda’s Instagram site shows her without eyes so clearly they decided to remove them. They must have been causing pain and she’s was probably blind anyway. But the Instagram site does not spell this out clearly. Therefore I have to guess. 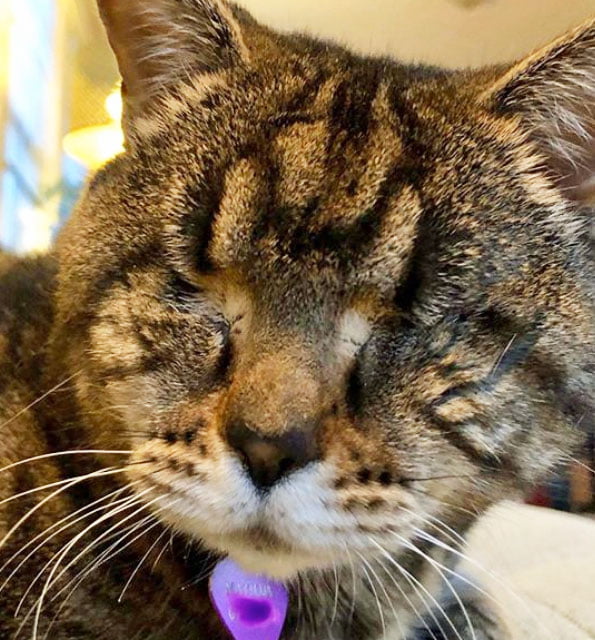 Am I the only one who sees exploitation of a very sick cat here? It just happened that a tabby kitten from a cat hoarding situation suffered from a nasty eye disease which made her look like an alien (I believe that two siblings also had the same condition). This was an opportunity to exploit. I don’t think the owners made any money from Matilda but they set up an Instagram account which has 149,000 followers. That makes Matilda a cat celebrity, one of many.

I say that cat owners who exploit genetic conditions like this to turn their cats into online celebrities are exploiting the cat so they can become celebrities themselves vicariously (i.e. through their cat). Nearly all these celebrity cats are the same; they have genetic conditions. Grumpy Cat is the most famous. A dwarf cat with facial bone structure which gave her that famous downward pointing mouth. Lil Bub also had anatomical deformity. There are and have been others.

In the world of the cat celebrity it is important that the cat looks different and the odd appearance is often due to an inherited genetic condition which effectively causes ill health. People should not celebrate ill health.

For me it is immoral to exploit these cats for fame and sometimes piles of money. Cole and Marmalade are different as they are not ill, which is a blessing to people like me. It surprises me that no one remarks on the ethical issues underpinning these celebrity cats.

Matilda’s owners compounded their unethical behaviour by begging for money online to pay for surgery. Yes, know I am being harsh in my criticism but for me this is not a good look. It smacks of poor human behaviour to me.

It is likely that the operation to remove Matilda’s eyes was carried out later than recommended in order to preserve her alien appearance. If that was the case it is also likely that she suffered unnecessary pain. What should have happened is that she should have lead a quite life and had the surgery early on. Before the internet and this obsession with cat celebrities this is what would or should have happened. 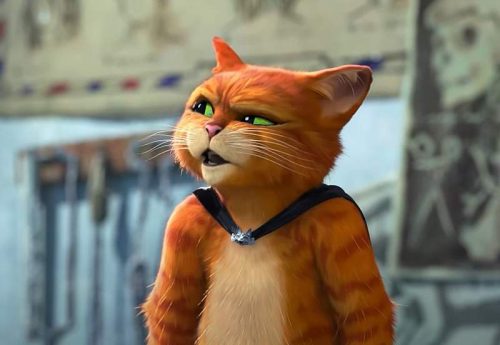 What kind of cat is Puss in Boots?

Conclusion: the latest incarnation of Puss in Boots is a male orange tabby-and-white random bred cat (moggy). The question in ...
Read More 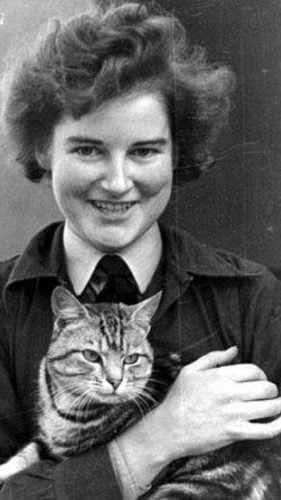 Picture of ‘Pyro’ the only wartime flying domestic cat

This is very late in the day to acknowledge and celebrate the achievements of a humble tabby cat who was ...
Read More 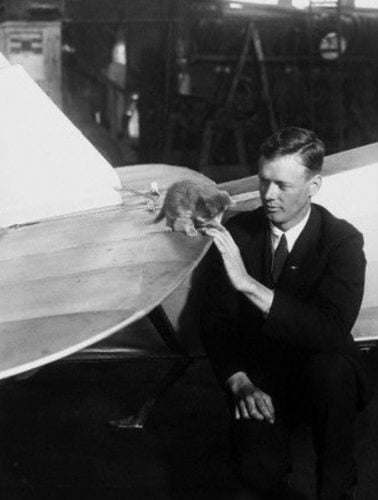 There are a couple of well-known photographs of Charles Lindbergh with a kitten. He was the famous American aviator, who ...
Read More 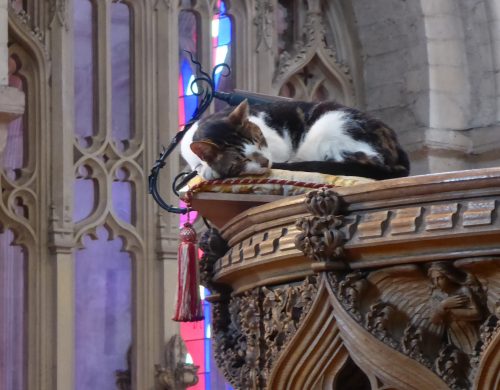 Picture of Budge, Norwich Cathedral’s cat, sleeping in the pulpit

This is a really nice photograph of a cathedral cat. Cathedral cats are very popular and very useful to cathedrals ...
Read More 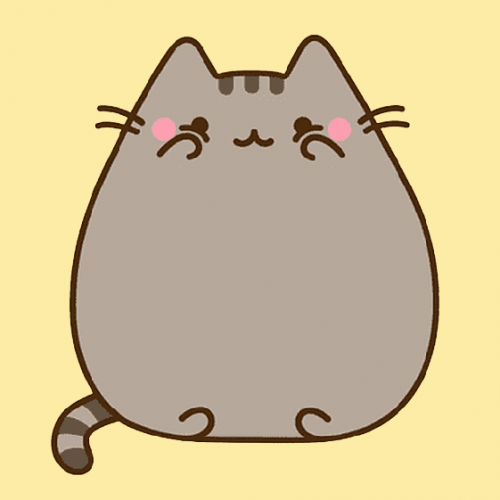 What type of cat is Pusheen?

Pusheen is a female, gray tabby, cartoon cat. There is no indication that she is a purebred cat. I will ...
Read More 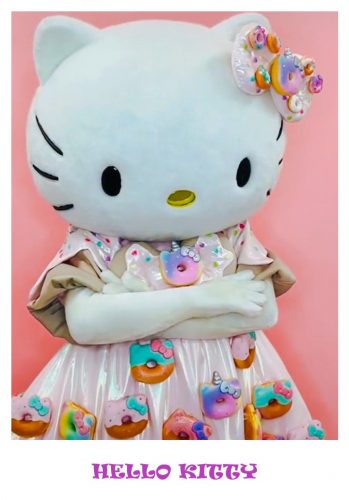 Hello Kitty – what type of cat?

Hello Kitty is a female, anthropomorphised (humanised), Japanese Bobtail cat. She is all-white and her full name is Kitty White ...
Read More 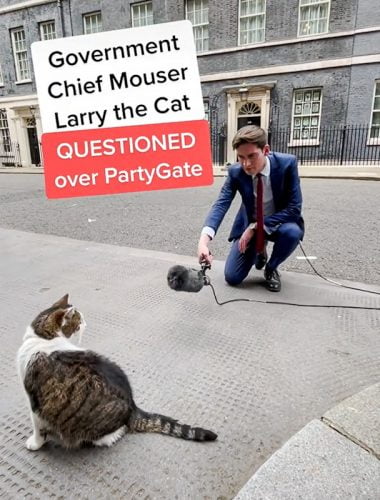 This is a cute little video on TikTok which is now slightly out of date but the 'Partygate' scandal rumbles ...
Read More 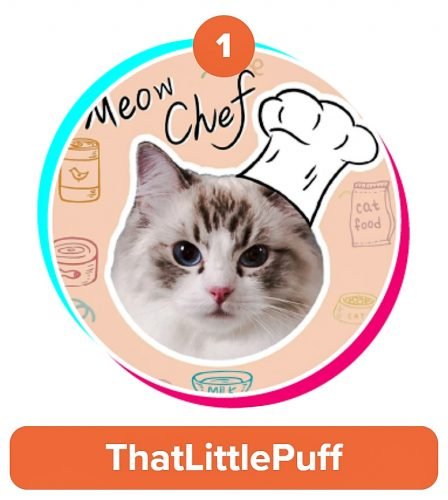 According to the allaboutcats.com website, 'thatlitttlepuff', an attractive gray-and-white influencer cat with blue eyes, is the most successful TikToker with ...
Read More 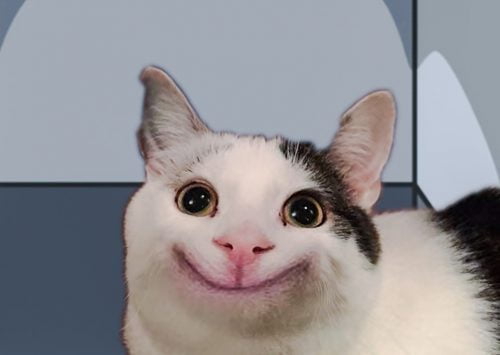 What cat breed is Beluga?

Beluga is not a breed of cat. Beluga is a random-bred cat i.e. a moggy. Although I sense that it ...
Read More
Please comment here using either Facebook or WordPress (when available).