You must remember the cat rescue job vacancy of 10th August 2018 that went worldwide viral (see the page – opens in new tab). The Boswells own and manage a cat sanctuary on the Greek island of Syros. They advertised for a experienced cat rescuer to step into their shoes while they expanded their organisation to include America. The photos of their cat sanctuary were magical and a magical number of applications came in: 40,000! Each day the Joan Boswell received between 1,000 and 1,600 emails in applications from 90 countries. 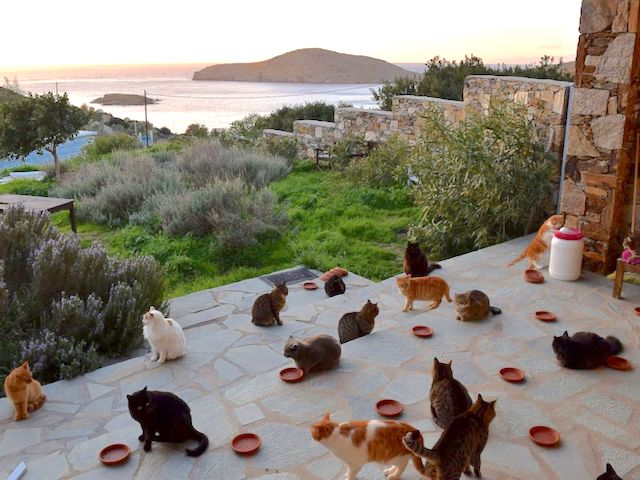 What a view. Super job.

It’s been a hell of a job just to shift through the applications and Joan likes to respond to them personally.

The applications are still arriving! Well they have selected a ‘temporary manager’ from Santa Barbara.

Jeffyne Telson the woman who got the dream cat rescue job on Syros. She lives in Santa Barbara, Calif.

That person is Jeffyne Telson. She is the founder and manager of ResQcats in Santa Barbara, California. It has been running for 21 years. Telson’s rescue concerns stray cats and she had visited the Greek islands before checking out the cats. And both Joan Boswell and Jeffyne Telson as artists. On paper she was ideal.

The Boswells traveled to Santa Barbara to meet Telson in the middle of September and they got on like a house on fire.

An offer was made and accepted. Telson will run the Greek cat sanctuary for several months and then another applicant finalist will take over – yet to be named.

I guess Telson wants to live that dream at least for a while before she returns to California. She’s married so I think she’ll be separated for the duration. It’s her husband who saw the job advert by the way.

CBS are making a documentary about the whole affair and, as far as I know, they’ll film Telson travelling to her new job. The most famous job on the planet right now.

The job advert and applications signal a yearning by hundreds of millions for a simpler and more gentle way of life in a world which is rapidly becoming more difficult and complicated.