The American Shorthair was a farm moggie back at the time of the English settlers to America and throughout the intervening years to the time of the new fancy in the late 1800s. The cat fancy turned a moggie into a cat breed and over time it became America’s standard shorthaired cat and extremely popular. This is a robust cat of balanced appearance.

See a still photo of PIPER + a bit more

The American Shorthair has a history much like Americans themselves. There are records, apparently, which tell us that this cat came over with some of the first Americans (the pilgrims from Plymouth, England) on the Mayflower, which landed at Cape Cod in 1620. This is Maine, USA, the place where the Maine Coon also started its life in the USA – see Maine Coon cat history.

This cat has, therefore, lived a life, in North America, in parallel with her human companion and the Maine Coon cat. A pretty harsh life bearing in mind the conditions and cold winters. This begs the question whether Native Americans, of which there were about 10 million when the Europeans arrived, kept cats. They certainly kept dogs as they were useful in hunting. As to domestic cats I have my doubts. In which case the cats on the Mayflower were amongst the first domestic cats in North America. There were other opportunities for the American Shorthair cat to settle in north America: the French settlements from Nova Scotia to Newfoundland and the Dutch colony where New York now exists1.

Of course in 1620 this short haired cat was not known as a distinct cat breed as there were no definitive cat breeds at that time. It was what we now call a moggie in the UK or a domestic shorthair.

They were probably semi-domestic or at least a good number were. Today, there are many cats in the USA that could lay claim to be an American Shorthair. They are not as they do not have the pedigree.

It was during the 20th century that this cat was transformed from a common domestic cat to become a registered cat breed through the efforts of cat breeders and cat fanciers, in order to preserve the original cat.

Gazer has a stunning classic tabby coat. The picture above is one the most stolen by other website builders. They are all in clear violation of Helmi’s copyright.

The American Shorthair cat should be heavier (and therefore more muscular and compact) than first impressions suggest judging by the old cat associations’ standard which said that it should feel like a “sack of oats”1 (or was it oatmeal? – things get mashed up a bit). A sack of oats is heavy and pliable. That, I think, gives quite a nice idea as to what this cat feels like.

This American Shorthair cat is ranked 8th most popular on this site’s long standing poll (public vote on favorite cat breed) and 8th on the basis of numbers registered by the Cat Fanciers Association (at Feb 2010)4. One reason is its inherent health.

See a narrative version of the history of the American Shorthair covering different ground.

To people who aren’t cat fanciers or cat lovers the American Shorthair Cat has the kind of appearance that they expect a cat to have. Everything is in balance. There are no extremes. That means a face that is not over developed and extreme like that of the Ultra Persian. The American Shorthair cat’s muzzle is square and this is one of the “indicative features” of this cat breed.

Above I mentioned that this cat feels like a sack of oats, well the muzzle should look like a box of wooden matches1! On a practical level the underlying purpose of a square muzzle is an effective bite to catch rodents. This was a mouser after all [note: muzzle means: the projecting part of the head of an animal, including jaws, mouth, and nose – /dictionary. infoplease.com]. The muzzle is strong and wide1.

If you were describing a domestic cat to a Martian you’d describe the American Shorthair Cat, I think. They are medium sized cats with a strong body that is described as semi-cobby1 (see cat body shapes). The American Shorthair is supposedly less cobby than the British Shorthair. “Cobby” means stocky, compact, well muscled, heavy boned, short and wide.

The face should be sweet and not extreme1 (over developed to the point of unnaturalness). The head is broad, rounded1 and the medium sized ears are set quite wide apart. The eyes are round and also wide apart in keeping with the broad head. There should be a break in the line from the forehead to the nose. This is described as a “stop” or better an “indentation” between the brow and the beginning of the nose. Quite a lot of breed standards mention this (for all the breeds – the modern Siamese has no break, for example) and it is a bit of mystery to non-cat fancy people.

As mentioned, they were working cats (mousers), they are robust, stocky and powerful. Of course pretty all domestic cats are impressively muscular. The coat is all weather (meaning hard) and not the silky dense and soft coat that is found on the British Shorthair cat (more on the Brit SH)

The silver classic tabby (see photographs of Utah and Gazer {marbled pattern}) is the most common coat color and pattern and it can be spectacular on a well breed ASH (please play the short video above to see a coat like this). Although a very wide range is allowed by the associations (81 different colors and patterns); the ASH is shown in all divisions and all color of the traditional category1. The silver tabby provides for a fantastic contrast between pattern and silver background. 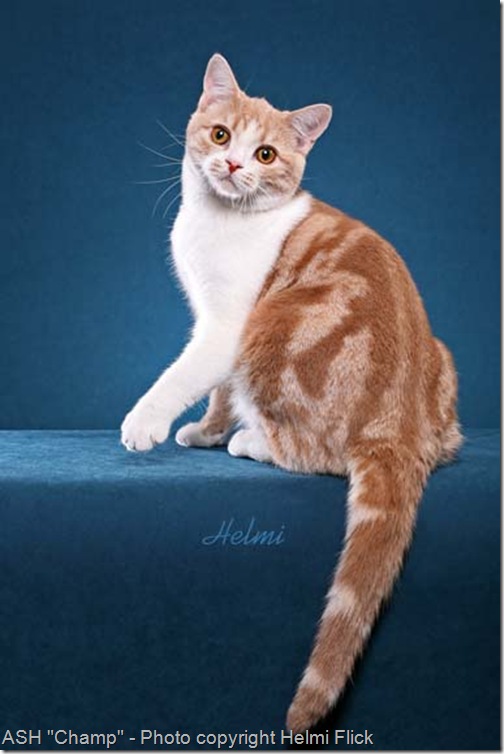 Some cats are heavier than you would have thought, this is one of them. The male weighs 11-15 lbs and the female 8-12lbs (compare the Maine Coon 13-20 lbs for the male). Click on the link to see a thorough comparison of cat breed weights. This is a sedate cat and can it seems put on weight if it is not monitored. Try and give over some time to play time and there are articles about cat food on this site.

On the basis that the poll for the most popular cat breed that is running on this site, is an accurate reflection of the public’s opinion, it is a little surprising that the American Shorthair cat is not in the top ten most popular while the Brit SH is ranked 5th (as at mid 2008). I am not sure where this “anomaly” comes from. Perhaps it is simply this. Most visitors to this website are Americans (thanks for visiting) and all of us have an interest in foreign places and cultures. The Brit SH reflects the British culture. If most of the visitors to the site were Brits the voting would no doubt be different. Update: ASH ranked 8th as at Feb 2010!

The following picture gives an impression of what happens at cat shows in order to capture photographs like these. This picture was taken at a TICA cat show in Waxahachie, which is about 50 miles south of Dallas.

Ken and Helmi Flick at work photographing an American Shorthair cat at TICA Waxahachie Cat Show. This cat has a silver tabby coat like Gazer’s above. Photo ©copyright Michael Broad. Read and see lots more on this:-

It seems that the National American Shorthair Club was formed at a time when the American shorthair cat was taking off in popularity. The name of the cat had about ten years earlier been changed to incorporate the word, “American” which created popularity. The club started in 1972. They have some great looking marble patterned silver tabbies on the page about the club’s history. Well, they seem to be silver tabbies but they are black and white photos so it is hard to tell.

References other than stated:

1. Legacy of the Cat by Gloria Stephens and Tetsu