The Andean cat is a small, attractive wildcat with a tabby coat and long tail. It inhabits a rather harsh, cold and barren landscape in the Andes Mountains at around 4,000 meters above sea level. Its population is low at an estimated 2,000. Its primary prey is viscacahs; rodents related to chinchillas. The Andean cat allows people to approach. This has facilitated its demise as locals like to kill this cat for ritualistic purposes. Hence the need to get local people involved in its conservation.

The Andean Cat is yet another wildcat that is either endangered or under threat of entering that fragile classification by the IUCN Red List (see IUCN Red List for Cats). Accordingly, I focus on conservation in this post. PoC has donated $50 to the Andean Mountain Cat and Small Cats in S. America wildaboutcats.org project. (see Pictures of Cats org Donations).

In 2002 Mel and Fiona Sunquist, the authors of Wild Cats Of The World say that this cat was one of the least known felids in South America. In 2010, Jim Sanderson Ph.D., an expert on this cat species, is managing with his colleagues the Andean Cat Project in South America and has received the go ahead from the government to create the first Andean cat conservation and monitoring center.

The scientific name is Leopardus jacobita. The genus Leopardus, in which this cat is included, contains most small Neotropical felids. Its inclusion is based on genetic analysis. Although the classification was based in part on a very small number of individual cats. The classification was also based on the size of the auditory chambers in the skull. It is not known how closely it is related to the Pampas cat (src: IUCN Red List of Threatened Species™ – “Red List”).

As stated in the name, its range is the Andes Mountains in the west of South America and is indicated in red (and extended by a blue line) on the map below, which is an embedded Google map created by me. The range is a refined version based on the IUCN Red List and should be up to date Update 10 Feb 2010:the additional area within the blue line is due to recent research by Jim Sanderson PhD and his team. You can refine it if you have the knowledge to do so.

I have created a map of the Andean cat range using Google My Maps. The intention is to let people contribute to it. Often precise information is not available to allow a map of the range of a wildcat to be drawn accurately. If anyone has the knowledge to refine the map then please contact me by email: mjbmeister[at]gmail.com, whereupon permission will be granted. You can then go to this link: Andean Cat Range – Google My Maps and amend it – thanks. The link opens in a new window. You can see the above map in larger format and some more information about the range of this cat here: Andean Cat Range.

The Andes covers these countries: Argentina; Bolivia; Chile; Peru. The distribution of this cat is restricted to the higher areas of the Andes. The range map below is one I made earlier. 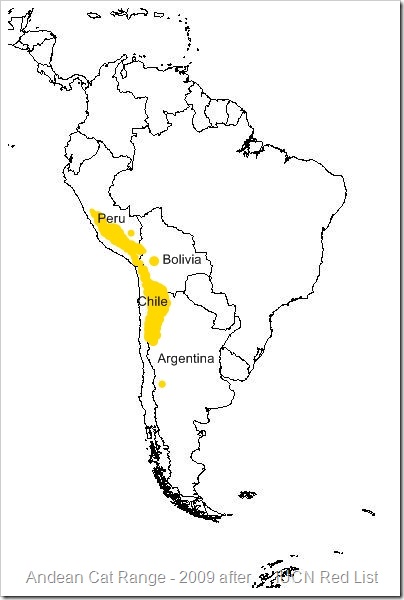 These are the heights at which this cat has been seen in the countries mentioned:

The range in Peru has been found to extend from the far south to 800 kms away in the center of Peru. The records of distribution are down to the efforts of the Andean Cat Alliance (www.gatoandino.org). Although, sightings of this scarce cat are very rare. Apparently less than 2500 cats are believed to exist.

As mentioned, this is low (not untypical for wildcats, sadly). Although the Pampas cat, a close relative, is similar in appearance in the high Andes, the Andean cat is much rarer. Apparently, the local people have difficulty distinguishing the Pampas cat from the Andean cat. This may prove important as they are killed sometimes for what can only be regarded in modern times as superstitious reasons (education is the answ er, see below). There is a lower genetic diversity in this cat species compared to the Pampas cat (see Cat Inbreeding Means Poor Sperm

). A population estimate was one cat per 5 square kilometers ( 25,000 ha area in northern Chile). There are none in captivity as far as is known. The population size trend is, unsurprisingly, downwards.

This wildcat is found in arid and sparse land (note the photograph above). The high Andes has no forest. The terrain is rocky and steep. This cat is thought to be solitary but can be seen in pairs. This cat is mainly crepuscular, it seems (active at dusk and dawn and night – in line with domestic cats). This is because its main prey is also crepuscular, the Mountain Vizcacha. As the terrain is sparse and poor in regards to supporting wildlife, the range is probably large (estimated home range of 65.5 km²).

The Andean cat is medium sized, similar in size to the domestic cat. Appearance is as follows:

The Threats to the Andean Cat

The threats to the survival of this rare wildcat are set out in tabular form for ease of reference below:

As mentioned above the Andean cat is protected in the countries concerned to little effect, it seems, due to poor or little enforcement of legislation. This is a problem worldwide due to lack of commitment from the authorities. I say that the IUCN Red List should take this into account (i.e. project ahead not just assess the present, which seems to be the case). This wild cat is listed in CITES Appendix I (see IUCN Red List for cats to see overlap between Appendix I and Red List).

I find these (summarized by me) objectives worthy but ask whether they will be implemented properly. I have doubts but as mentioned the best man to manage conservation is actively involved, Jim Sanderson, and I would think he is quite possibly down there right now (July 2009) working on the conservation center. The Andean cat is the most endangered wild cat in the Americas.

Jim Sanderson Ph.D. is recognised as one of the top small wildcat researchers and conservationist in the world and he is establishing an Andean Cat Conservation Center at San Pedro de Atacama, Chile. He has makes these points about this cat:

(1) It is the only endangered cat in the Americas with an estimated fewer than 2,000 existing (at Feb 2009). (2) With local help (Andean Cat Alliance) he has identified where there are significant populations of this cat. (3) There are five threats to this cat’s survival in the wild.

(a) Many people of the area believe that this cat carries supernatural powers which can be harnessed for the benefit of a person if the cat is killed and it is then decorated and displayed. This wild cat is easy to kill because it is not afraid of people (b) In many areas eating the prey of this wild cat, viscachas, is common. Viscachas are the primary source of food for this wildcat (c) Mining activity destroys habitat (d) Exotic species that have been introduced threaten this wildcat (e) The feeding areas of viscachas are threatened by global warming as the glaciers that maintain these areas are melting.

Jim Sanderson is working with local people to mitigate these threats.

Unsurprisingly, there are no videos of this cat so to give a flavor of life in the Andes Mountains here is a video. The survival of this cat depends on the people: