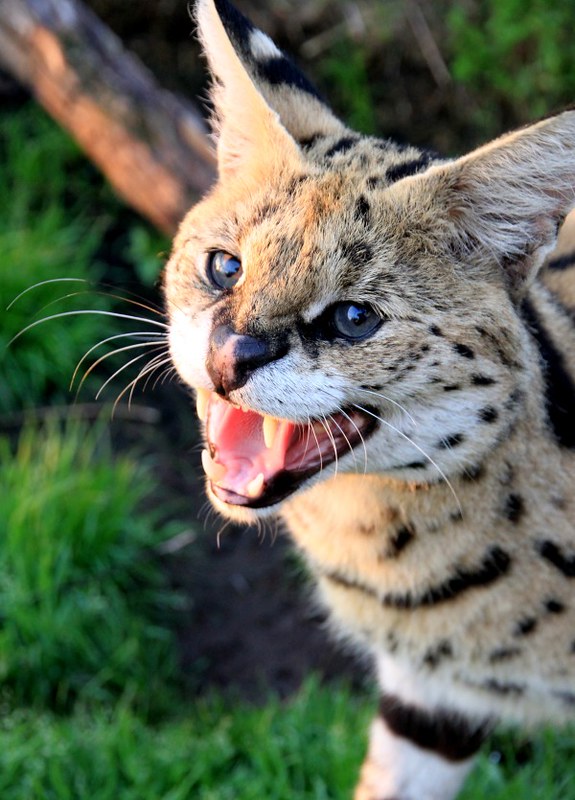 African servals don’t make good pets to most people who buy one. Good pets are domestic animals that provide companionship and enjoyment. Good pets are easy to get along with and they should fit in with the human lifestyle with ease. Their maintenance should be easily manageable in terms of time and funding.

Servals don’t really meet these requirements for several reasons. The first reason is illustrated by a story today online from Cleveland.com which reports on the shooting of a serval in woods near a housing estate in Fairfield County, Ohio, USA. The cat was domesticated. He or she was someone’s pet.

The police officer approached and the cat growled back. The officer shot the serval dead. This death was the result of human failing and it is instructional. There was no need to kill the cat, in truth. The cat intimidated the police officer so he killed it. 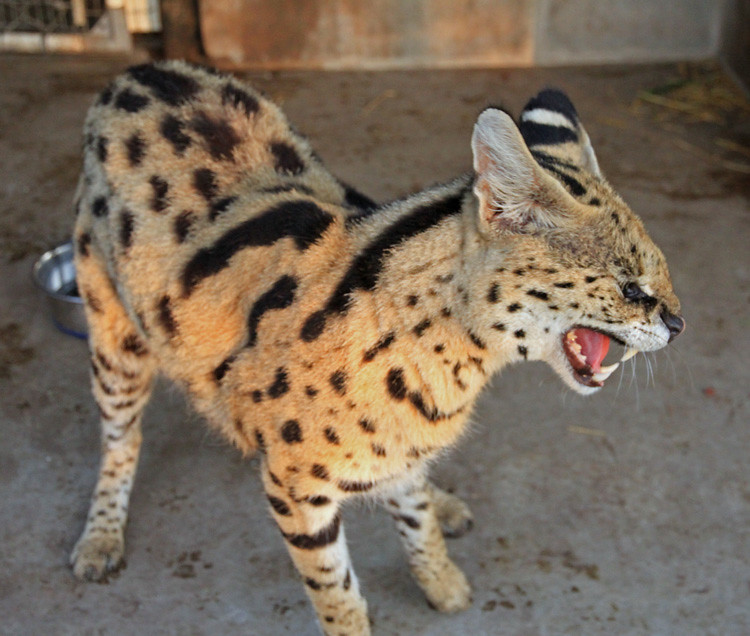 There are many examples of pet servals escaping enclosures. I wrote about them some time ago (click this to see the article). The fact that servals want to escape tells us that the typical home of the average American or European is unsatisfactory for an African serval.

You don’t have to take my word for it. People with more knowledge than me will agree with me. Take Big Cat Rescue. They know a thing or two about wild cats. They say that there are 242 reasons why you should not keep a serval as a pet. They are referring to the 242 serval escapes from homes in the USA. It is extraordinary. Dwell on that thought before reading on.

This cat is the size of a largish dog at about 2 feet to the shoulder. They have strong legs and large claws and teeth. Are you ready to be scratched by a serval or are you going to do something inhumane such as declaw your serval? A lot of serval owners do and it is quite wrong. If you have to declaw a serval to make the cat acceptable as a pet, the cat is not inherently acceptable as a pet. The serval in the videos on this page, Serena, was declawed by her female owner.

Servals are energetic and fast movers. They slap powerfully and rapidly. It can genuinely harm a person. And do you want to keep other pets? How will a serval deal with that?

When I was at A1 Savannahs a cat breeder in Oklahoma, America, there was a serval in an enclosure. She had been abandoned by her owner. Just another one because there are many. I wonder how many serval escapes are actually servals being released by owners desperate to get rid of their cat?

The serval will tend to spray urine to mark territory. Domestic cats do this sometimes but servals are more likely to do it and in greater quantity. When I was at A1 Savannahs I went into an enclosure with a breeding pair of domesticated servals. The male was large. They both hissed at me. Servals hiss a lot and it is intimidating. It is not the same as a domestic cat hissing believe me. The male sprayed urine over me and I could not get out of the way in time to avoid it. So let’s say that you’ll have to be prepared to have your home smell of serval urine. I am told that no one keeps a serval after their pet reaches 1.5-5 years of age because of the urine spraying.

In the wide open spaces and grasslands of the African continent, the serval regards ten square kilometres as its home. It needs that much space to feel at home. Think how unsatisfactory a house and enclosure feels to this cat. In effect you become a zoo keeper. And captive cats in zoos don’t do well. The tend to die younger than they should do.

I am painting a bleak picture; perhaps too bleak. There must be some success stories where their owner is delighted with their serval companion and the world is in harmony. But there are clear signs that it does not work well enough or often enough. You have to be a certain type of individual with a clear vision and knowledge of what you are getting into.

The problem is that servals is an exotic cat. It looks exotic and the owner acquires some status from possessing one. It is like possessing a flashy Jaguar car and parking it in the drive. Jaguar cars are far easier and less costly to maintain and live with than a serval 😉

Well, perhaps not more costly but certainly a lot easier. If you fancy buying a serval as a pet because you are entranced by the cat’s exotic appearance, stop and have a reality check. Think about the difficulties some of which I have touched on here and the cost of maintaining the animal.

Finally think about the signal a pet serval sends out to the unscrupulous men who want to make money by selling kittens of wild cat species of many kinds. They may take them from their mother. Wild cat species as pets in America encourages the abuse of these beautiful creatures in the wild. Do you want to encourage it?

SOME POSTS ON THE SERVAL:

The serval is one of the more specialised wild cats. This means that it will have adaptations to improve survivability ...
Read More

The serval and caracal are the two best feline jumpers in the world. On my reckoning the caracal just beats ...
Read More

Difference between serval and domestic cat

As all species of cat are incredibly similar, the starting point is that there are very few differences between the ...
Read More

Are servals legal in Georgia?

The video is described as a serval loving a Savannah cat. But in this video, we see a serval grooming ...
Read More

Is it legal to own a serval in Texas?

If you are an individual, by which I mean you are not a commercial or non-profit enterprise, as specified by ...
Read More

Are servals legal in Georgia?

It is legal to own and possess a serval in Georgia provided you have the requisite licence or permit. Conversely, ...
Read More

Are servals legal in Arizona?

Servals are legal in Arizona if you have a permit. The permit (license) is restrictive. It states that no servals ...
Read More
Please comment here using either Facebook or WordPress (when available).