Yes, cats’ eyes are more sensitive to light than those of humans. This is why they shine in the dark because of a reflective layer behind the retina which is called the tapetum lucidum – translation: “bright tapestry”. Humans do not have this layer and it allows the cat to capture light more effectively. In fact it makes a cat’s eyes 40 percent more effective than ours at capturing light.

A cat’s eyesight is generally poor, it is said, although their eyesight is superior to that of humans under subdued light conditions because of the “bright tapestry” mentioned above. It is said that a cat’s eyesight is 20 percent to 30 percent of that of humans. Although this does not take into account the superior effectiveness of a cat’s eyesight at dusk and dawn. However, cats are very good at detecting moving objects. This allows them to hunt more effectively. Also detecting sound with precision to locate prey is a very important aspect of a domestic cat’s life. I believe that close range eyesight is also poor for the domestic cat which is why they rely on their sense of smell under these circumstances.

What colors do cats see?

A domestic cat’s pupils dilate to 3 times the size of ours and can capture up to 6 times more light. They also have a wider field of view. 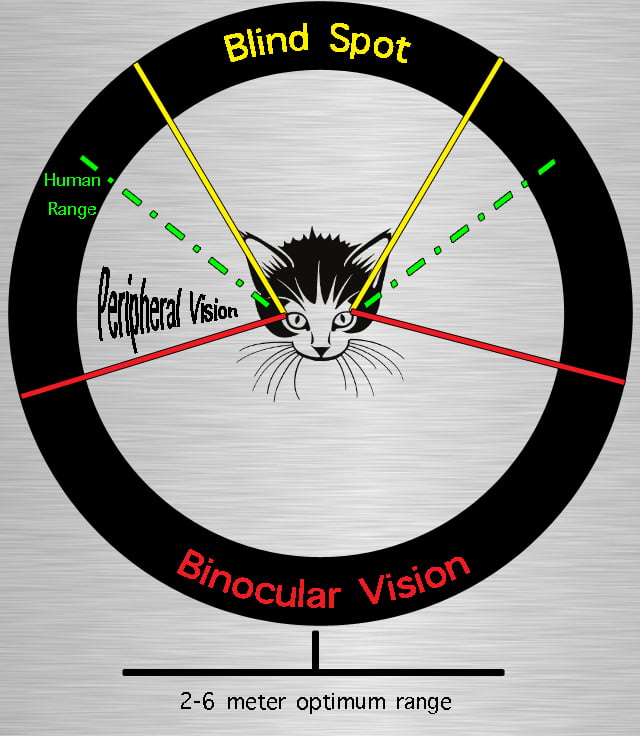 Dr Yuki Hattori, Japan’s leading cat doctor, tells us that stationary objects may sometimes be invisible to the domestic cat because of their poor eyesight. They may not see static objects but they are able to compensate because of their acute sense of hearing and high sensitivity to light combined with their eyesight’s wide field of view.

The domestic cat has a particularly interesting technique to reduce the amount of light impinging upon their retina. Not only does their iris shrink like a panel i.e. the slit-pupil contracts, the eyelid can pass over the eye to further restrict the amount of light entering it. This allows a cat’s eyes to be particularly sensitive to light but not be harmed by bright sunlight.

By now, it is commonplace for people to know that all kittens have blue eyes. It is at about the age of three months when pigment in a cat’s eyes begin to develop giving them blue and green tints. Siamese and Himalayan cats keep their blue eyes right the way through adulthood.

Why kitten eyes are blue. Image: PoC based on a photo in the public domain.

The blueness in the eyes of a kitten is thanks to the physical properties of refraction. White light is refracted revealing blue in the same way that when you look into the sky you see a blue sky.