He is a self-declared redneck. I can barely bring myself to write about this person. This is because he is so different to me. He is different to millions of Americans as well. He confesses that he is addicted to hunting, fishing and trapping et cetera. Included in that desire to kill animals is his addiction to killing feral cats. He says that feral cats are a huge problem in America. He believes that the only way to solve this so-called problem is to kill them. He does not know how to distinguish between outdoor domestic cats and feral cats. He does not mind. He also believes that animal lovers are stupid liberals blinded by their own beliefs and conned by PETA. 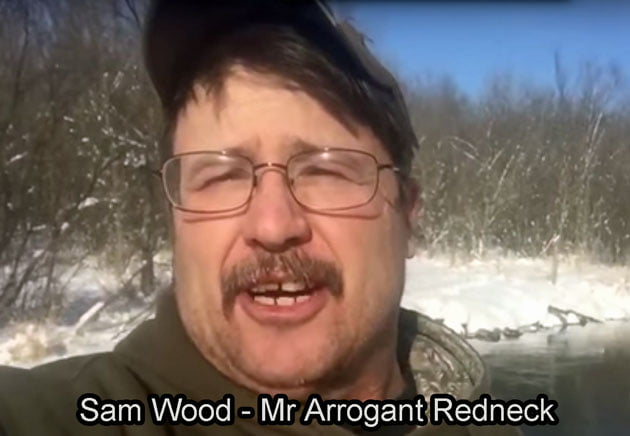 He believes all the literature published online about cat predation on native species in America despite the fact that a lot of these studies and surveys are inaccurate and the numbers exaggerated. He wishes to believe that feral cats kill lots of birds and wild species and therefore he is blinded to the fact that the surveys may be inaccurate. He is blinded by his arrogance to the fact that some of the studies have been carried out by ornithologists. He is so certain in his thoughts and ideas that he feels he is able to lecture all animal lovers and advocates and to state that they are stupid.

Such is his certainty in his beliefs that he is completely closed to the possibility that his beliefs are incorrect or distorted. He’s been brought up in a way that is alien to very many of us. He has been indoctrinated to believe that animals are there to be hunted and trapped; to be used for the benefit of humans. He has no sensitivity towards the pain that he is causing animals and towards the cruelty of his actions.

Because of his intransigent, arrogant viewpoint, he receives a lot of criticism from decent minded animal advocates but he accepts this and does not listen because his ears are deaf to rational thought and argument. 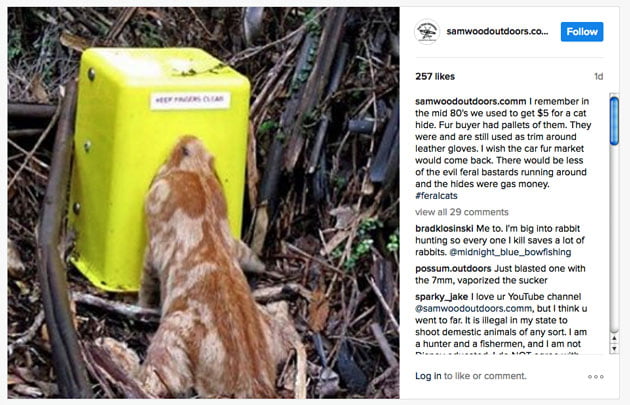 Trapped cat. The cat could be feral or stray. Sam Wood likes this (see his comment to the right of the photo).

He presents a picture on his Facebook webpage and on Instagram of a cat killed by some sort of grisly trap (see Instagram picture above) and said that the picture may cause offence to some people but that feral cats are a huge problem. He knows that there will be a backlash from people who he describes as “the Disney educated”. He believes that he is putting the truth out there and that he can educate animal advocates and people who love animals but he’s blind to the fact that he himself needs educating in the possibility that what he’s doing is cruel and an abuse of animals for his pleasure.

He proudly declares that back in the 1980s he was able to get five dollars for the pelt of a feral cat and that the fur was used to trim leather gloves. Some trappers targeted cats year-round and he said that this helped the environment tremendously and provided them with a bit of pocket money.

He also describes people who like animals as “bunny huggers” who want to protect cats. This man is irritated because he says that animal advocates refuse to educate themselves as to the true impact of what they’re doing and saying.

But this man massively underestimates the intelligence and thoughtfulness of animal advocates who know exactly what they’re doing and what they’re saying. He fails to understand that humans are human animals and it is our duty to live on this planet in harmony as best we can with other animals who have an equal right to be on the planet. The days of hunting for food and pleasure should be over. We don’t need to do it anymore.

As for feral cats, we, humans, put them there and therefore we have an obligation to treat them humanely and decently. If we wish to reduce their population size it needs to be done humanely and with sympathy to their plight. The only known way to do that currently is through trap-neuter-release.

He calls himself Sam Wood Outdoors on Facebook. His attitude towards animals tells me that he was raised by his parents to treat animals cruelly. I believe that it is he who needs educating and enlightening.

The depth of his feelings and the depth of my feelings towards animals indicates that we are miles apart. So far apart that we will never be able to agree on the relationship of humans to animals both domestic and wild. This is depressing because if humans are to improve their relationship with animals, which I believe is essential if we are to preserve wildlife on the planet, we need to alter the attitude of people like Sam Wood. I don’t see any chance of that, not within the next 50 to 100 years.

P.S. You can’t access his Facebook page from a search engine result. Update: Elisa has found his FB page.

P.P.S. I wish to thank with great appreciation all cat lovers and animal advocates (and any other decent person) who have made a comment in support of this article. Thank you very much. I also wish to add that I do sometimes allow cat haters and feral cat shooters to comment on this page in order to keep a balanced viewpoint. I do not believe in censoring people (provided they don’t insult others) but everything that they have said is misleading and incorrect and what they do is illegal even if the authorities might turn a blind eye to it.

Note: the article was first published on Feb 13th, 2017. I have decided to republish on August 2nd, 2022, because of the interest in this horrible man judging by the extensive number of comments. Please join in.

Below are some more articles on killing feral cats.

NEWS AND OPINION: This is another interesting story about how communities deal with feral cats. It is an issue which ...
Read More

There is a confusing (to me) and complex interplay between the feral cats on the Australian continent, the rabbits upon ...
Read More

At 2022, PETA do NOT have an all-encompassing policy to kill feral cats as a humane solution to the misery ...
Read More
Please comment here using either Facebook or WordPress (when available).