The Asian golden cat has been difficult to classify taxonomically and there has been confusion. I have used a layperson’s terminology (‘Asian’ should probably be ‘Asiatic’) as the title to this page. This strong wildcat is about the same size as an ocelot, both are medium sized wildcats. As is the case for the African golden cat it has many coat colors while the face is distinctly marked with black and white lines. This wildcat has a wide but increasingly fragmented distribution from Tibet to Sumatra. Its preferred habit is forest: wet and dry from sea level to 3,000 meters above sea level. The Asian golden cat hunts mainly on the ground and its prey varies greatly in size from rodents and birds to small deer. It is classified as Near Threatened by the IUCN Red List™; the major threat to survival being habitat loss due deforestation.

The term, Asian golden cat is, it seems, technically incorrect as the name of this cat is either:

In terms of physical appearance this wildcat is similar to the African golden cat but is closer to the Marbled cat (genus Pardofelis) hence its scientific name Pardofelis temminckii. As can be seen from the photograph below the coat is as the name suggests, golden brown and the off-white facial markings are stupendous. There are some spots on the belly and in China there is apparently a spotted variant. Melanistic (black) variants are also known to exist.

As mentioned, this is a medium sized wild cat, a step up in size from the domestic cat and perhaps similar in size to an F1 Savannah cat, for example. The large F2 Savannahs (a recognized domestic cat) weigh in the order of 20+ lbs (see Motzie and Largest Domestic Cat Breed) while this wild cat weighs 26-35 lbs and is 36 inches in length (90 cms) excluding the tail of 20 inches (50 cms). 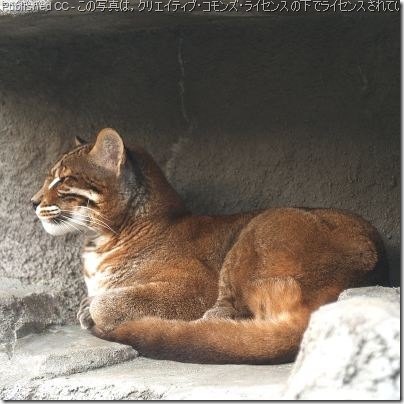 The above picture of the Asian Golden cat is published under a creative commons license. This text accompanies the license: この写真は，クリエイティブ・コモンズ・ライセンスの下でライセンスされています。The picture comes from this site: Opencage.info

Status in the Wild

The current IUCN Red List of Threatened Species™ Assessment is “Near Threatened” (as at 28th May 2009). But the IUCN people say that the Asiatic golden cat is bordering on “Vulnerable” (“close to qualifying..under Criterion C”) . I couldn’t readily see what Criterion C refers to but I will presume that it at least in part relates to the continuing population decline and projected decline in this cat’s population due to habitat loss as a result of rapid deforestation in Southeast Asia.

IUCN Red List of Threatened Species™ are not convincing in their assessment of the population numbers of this cat. Surveys are contradictory and they rely on similar numbers to the Clouded Leopard in respect of camera trap encounters against a background of a similar range etc. That would mean a figure of about 10,000 (see Clouded Leopard Population 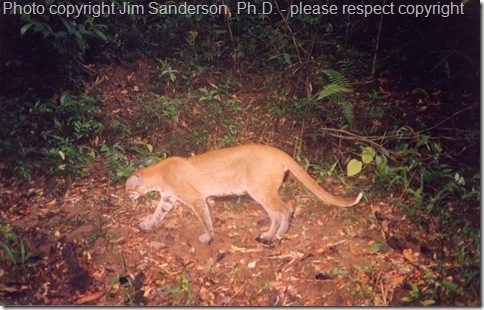 Asiatic golden cat caught in a camera trap in Cambodia some years ago by Jim Sanderson Ph.D.

Geographic Range and Habitat and Ecology

The Asian golden cat lives in large but fragmented areas of Southeast Asia, in the following countries:

The map below, of the Asian golden cat range, was made by me using Google My Maps. It is based on the IUCN Red List of Threatened Species™ map. If you click on the blue flags you can see photos of the landscape in the area concerned, a video (China) etc.

The original version of the map below can be accessed from My Maps at this link: Asian golden cat range, and it can be modified on request if you would like to contribute. Please contact me at mjbmeister[at]gmail.com to collaborate.

You can see this map in larger format and with more on the distribution of this cat here: Asiatic golden cat range.

Forest habitat is preferred by this cat, including tropical rainforest, favouring areas away from human activity. It is sometimes seen in a more open landscape (more so than for the Clouded Leopard and Marbled cat). In terms of height above sea level this cat is found up to about 3,000 meters (Himalayas – the highest recorded however being 3,738 meters in the Bhutan’s Jigme Sigye Wangchuk National Park). The distribution and home range is similar to the Clouded Leopard. In a survey, it was found that the home range extends to 32.6 km² (females) and 47.7 km² (males).

According to camera trap information, this wildcat is active in the daytime and dawn/dusk. It cannot be said, therefore, to be crepuscular. This cat makes the usual cat sounds including:

A ground hunter this cat can kill fairly large prey such as buffalo calves but it probably preys mainly on rodents, birds, lizards and small mammals up the size of a small deer. It will also prey on livestock such as sheep and goats.

Classified as Near Threatened by the IUCN Red List.

The most common threat to the wildcats generally also affects the Asian golden cat, namely habitat loss as a result of human activity. Other threats to survival are:

Protection comes in the form of CITES Appendix II listing as mentioned (but who is enforcing this and how effectively?) plus “National Legislation”. There are prohibitions on hunting in:

How effective and committed is the protection? The biggest threat is commerce in the form of deforestation (habitat loss) in my view and this seems not to be addressed.