See lion facts for information on both subspecies of lion.

There are 359 Asiatic lions left in the wild (Gir National Park) at April 2010 (this figure is quoted as being the same in 2006 as well4 – is it still accurate?). It is said that in 1936 a survey resulted in an estimate of 234 animals in the Gir National Park. In April 2010, the authorities say that a five yearly consensus at April 2010 will show that there is a population of 400 in the park3. The IUCN Red List of Threatened Species™ says that there are approximately 175 mature individuals. 34 animals were reported killed in 2007 (Jackson 2008). 72 have died in the past 2 years3.

There are serious concerns about the hybridization of captive Asiatic lions (African x Asiatic). India now only breed purebred4. I think it fair to say that the situation at this time (2010) is not good for this very rare subspecies of lion.

Yet the people living in the Gir National Park, where it is nly found, mourned the loss of a five year old male lion that fell (or was pushed) off a bridge over a 60 foot drop. It may have been traffic that forced the lion off. He was killed in the fall3. There is genuine concern from local people, but it seems that a coordinated or truly effective response to preserve this species is lacking.

This subspecies of lion is very similar in many ways to the African lion. I limit this page to information that is specific to this species. Please see Lion Facts for lots of easily accessible information about the lion in general.

Above: All are Flickr photographs published under Attribution 2.0 Generic license.

The low genetic variability of the Asiatic lion is not thought to be caused by inbreeding but to be a “characteristic feature of this species”8. It is said that from a genetic standpoint all these lions are like twins.

Description and Difference from African Lion

The differences between the Asiatic lions and African lions, both subspecies of the lion are listed below: 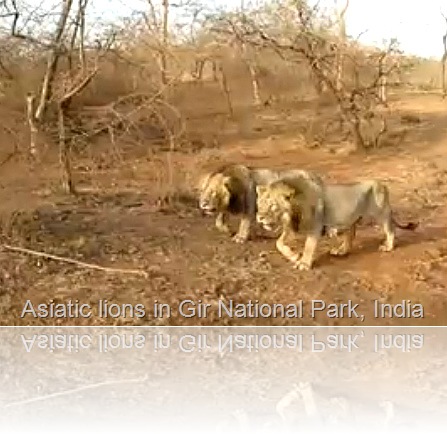 Politics has entered the world of wild cat conservation again. It had been thought that the Gir Forest sanctuary was too small. There were fears of a disease killing a large part of the population. Central government decided, in 1995, to move a handful of lions to the 133 square mile Kuno sanctuary in Madhya Pradesh by 2001, 9 yeas ago.

The Gujarat government refuse the move. They probably foresee loss of tourism business as 100,000 visit yearly. Yet the central government has decided to ban tourism to the reserves as it is killing the tiger it is claimed. That is disputed. The move to Kuno is also disputed and goes to court fro a decision. Gujarat says that Kuno has a poor record of protecting the tiger and in any case the preparations are not complete (some 15 years after the decision was made to move the lions).

It sounds bad. And I think that this politicizing of the conservation process and a lack of will to do something damages the lion’s and tiger’s chances of survival.

This has been much reduced over the years. Here is an extract from a 1832 book:

This less well known subspecies of lion once occupied habitat from the Danube to the Ganges. Its historic distribution extended across southwest Asia.

It now only occupies the Gir Forest sanctuary in north east India, in the state of Gujarat. The Red List says that this isolated population extends beyond the boundaries of the sanctuary.

This sanctuary is 617 square miles in area (1,598 km²). The habitat is a dry teak forest. Teak is replanted by the authorities as logging takes place.

Please see lion habitat for more on the distribution of the Asiatic lion and the lion generally as at late 2009.

In 1832 there were a couple of Asiatic lions inhabiting the Tower of London the well known landmark in the east side of central London, England. These lions, brother and sister, were the offspring of two lions, father and mother shot by General Watson. It was 1823 and the general was on horseback with his double barrelled rifle. He was approached by a male Asiatic lion and he shot it dead. The female approached and he wounded her. He followed her back to her den and shot her dead. There were two young cubs, which he took and raised them with the aid of a donkey. He shipped them back to England as a gift for the King, Henry I, who had them confined to the Tower of London.

The brother and sister mated and produced three cubs on 20th October 1827. They were the first to be born at the Tower since 17942.

In the Middle Ages lions were kept in menageries in Europe. In England the King’s menagerie was in the Tower of London. Apparently he discontinued this practice in 18402.

The population is considered stable although this lion is critically endangered per IUCN Red List of Threatened Species™:

Conservation11 consists of protecting the lions in the Gir Forest and establishing a second population as described above. Update: this initiative has progressed. Please read this page for more.

There was a previous failed attempt at establishing a second population in Chandraprabha Wildlife Sanctuary in eastern Uttar Pradesh. The lions were lost – shot or poisoned.

1. Pocock RJ 1939 The fauna of British India, including Ceylon and Burma in  Wild Cats Of The World (WOW) by the Sunquists 2002.

9. Wildcats Of The World by the Sunquists.