The Borneo Bay cat is about the size of a large domestic cat weighing on average around 6 kg (males) and 4 kg (females). This is also called the Bay cat. My reference book, which is the best, does not have a single weight in their listings. The book was published in 2002. It points to great difficulty in assessing this elusive species of small wild cat. However, the authors do mention a female Bay cat brought into the Sarawak Museum in 1992. The cat was badly emaciated with wasted muscles and protruding bones. They assessed her normal weight as being 3-4 kg. This cat’s habitat is being rapidly destroyed, by the way, because they live in forests and it is being copiously cut down and has been for a very long time.

The Internet tells me that the average weight of the Borneo Bay cat is 3-4 kg. The authors of that information may have used the same source that I have. It is perhaps useful to state without much hard data that the Borneo Bay cat is about the size of a large domestic cat with an extra-long tail. It looks a bit like a miniature version of the Asiatic golden cat.

4 kg is about 9 pounds. On that basis, we have to state that the Borneo Bay cat is about the same size as a domestic cat. Large domestic cats, in my view, weigh in the region of 15 pounds or more. So, if the Borneo Bay cat is the size of a large domestic cat its average weight would be about 6.5 kg, certainly more than the weight range I have stated above. I have not distinguished between females and males due to the dearth of information. My best estimate is that males weigh around 6 kg and females around 4 kg.

I hope that this information is useful despite the scarcity of information about the average weight of the Borneo Bay cat. It is still remarkably under researched and it appears that people have little interest in its conservation bearing in mind the destruction of its habitat on the island of Borneo.

SOME MORE ON THE BAY CAT:

The Borneo Bay cat range, as at 2009, is presented in a Google My Maps map below. The range may ...
Read More 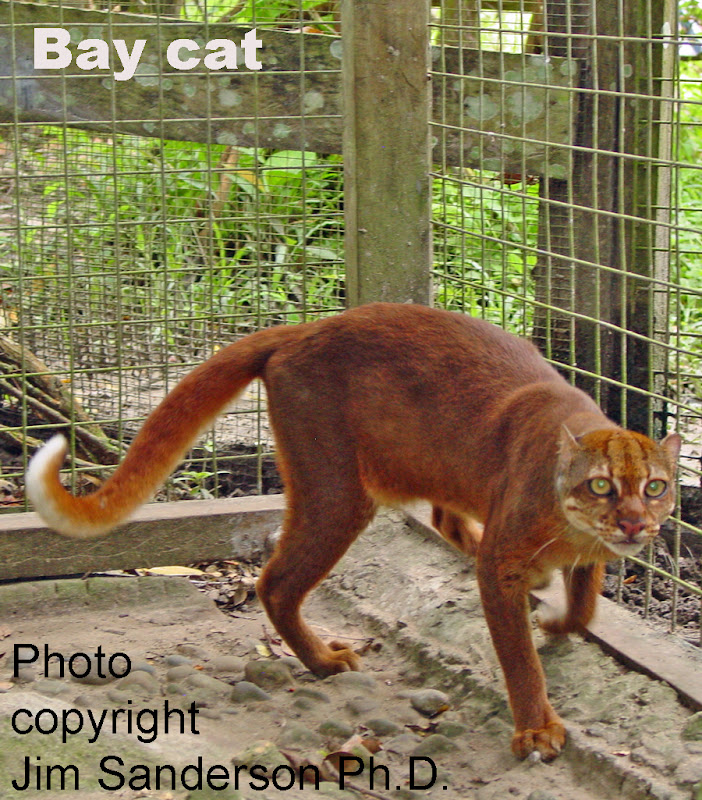 The bay cat is approximately the same size as a large domestic cat but with a longer tail (see wild ...
Read More