Balinese Cat History is the same as Siamese Cat History (new window) until the mid-1900s (if you click on the link you can switch between the two pages). After all the Balinese is a long haired Siamese cat. So, we can take it that there was a short haired and longer haired version (semi-long haired) of the same cat breed, the Siamese.  From the mid-1950s onwards, the cat fancy made an impact on what was a natural breed by developing the Balinese from the long haired Siamese.

Until the middle of the 1900s the Siamese cat was one cat, usually seen with shorthair and occasionally with longer hair. What was the ratio of shorthair to long hair? Sarah Hartwell answers that question. The long haired gene is recessive. This means that the effect of the presence of this gene is not seen readily. It is hidden sometimes for generations (when inbreeding takes place a recessive gene becomes more apparent). Obviously then, there were very many more shorthaired Siamese (the type the average cat keeper and lover knows) than long haired. I had no idea of their existence until researching the subject.

Long haired Siamese appeared in purebed Siamese litters in the West (USA, UK and Continental Europe). This means that one of the early importations of Siamese cat carried this recessive gene. It is not clear which import it was but an interesting article in the Penny Illustrated (an English newspaper) of 1871 referes to what is probably a long haired Siamese.

“The Hon. Mrs. Grey contributed an imported Persian cat of rare pedigree, besides which there were many Persian cats of several colours; Angora, Aleppo, and other foreign sorts, including one of great rarity from Siam (comment: this must be a Siamese cat). Lady Lubbock sent a beautiful long-haired creature in this class.”

The last cat referred to is a long haired Siamese cat. So we know that as far back as 1871 (at least) a long haired Siamese was in the West. This cat must have carried the recessive gene (but there were probably others). As can be seen from the above text, at that time, the Siamese was the king pin of rarity and therefore I suspect very desirable. This cat type/breed is now called a Traditional Balinese. 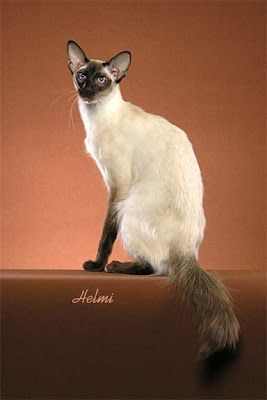 It is interesting to note that out of one cat breed (the Siamese) four have been developed. The Traditional Siamese (the “Thai” under TICA), the Modern Siamese (called the “Siamese” in the cat fancy), the Balinese (medium long haired Siamese) and the Javanese (a Siamese with more variation to the pointing colors and textures).  All but the Traditional Siamese are bred to be more “elegant” (rangy and thin).

Back to Balinese Cat History. We know that there were long haired Saimese cats popping up from time to time in the first half of the 1900s. These cats were registered as a “Longhair Siamese” for the first time in 1928 with the Cat Fanciers Federation (currently a registry covering the north east of the USA).

In 1955 the Longhair Siamese was bred for the first time in the USA and so began Balinese Cat history. Thereafter the development of the Balinese mirrors that of the Siamese in terms of the gradual change in appearance to a rangy, slim and long headed cat (the same as the Modern Siamese). During the development of this cat it was breed back to the Siamese. This removed the long hair except on the tail.

The cat was named “Balinese” by a cat breeder, Helen Smith in or around 1956 after the elegant Balinese dancers.

No criticism is intended but I think, being as objective as possible and based on the Siamese cat poll (go here and scroll down to see the results and vote), the more attractive cat is the one illustrated top right on this page. Do you agree? If so, please tell us. Read more about the Balinese cat.

The photographs in the collage below are all copyright Helmi Flick – please respect copyright. Here’s a great looking Modern Balinese Cat, though, which somewhat flies in the face of what I have said about preferences towards the traditional look: 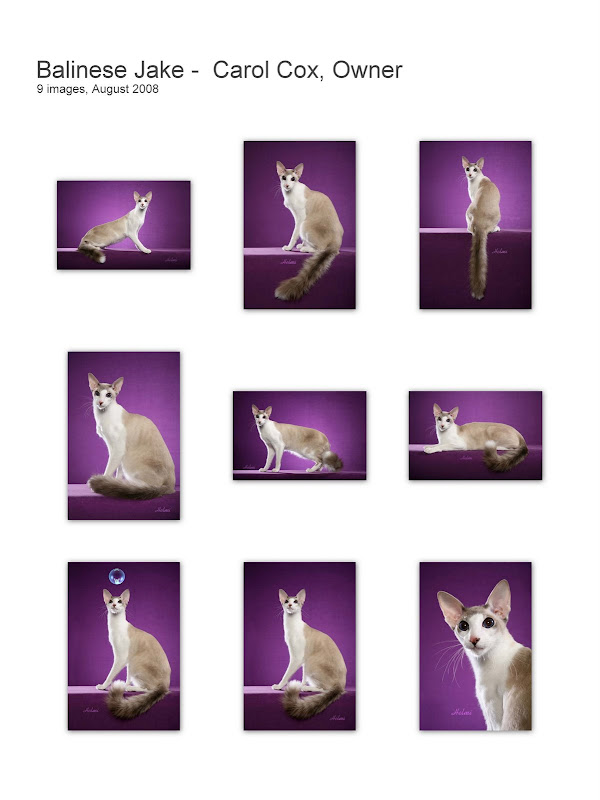