There are numerous reasons why you should adopt an older cat. However, it is useful to ask ourselves why kittens are more popular than older cats. For example, two cat rescues in Blackpool, UK say that when it comes to rehoming the cats in their care people almost exclusively want kittens or very young cats. 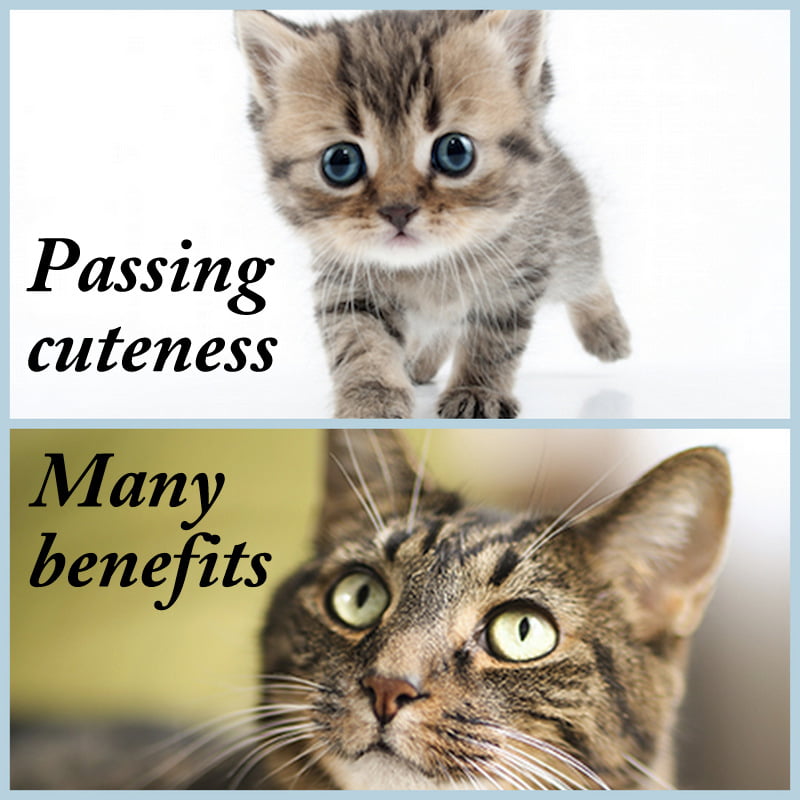 Benefits of older cats. Photo montage by PoC from pics in the public domain.

The reason must be that adopters are attracted to the cuteness of very young cats. It is almost like adopting a baby. And when you give a cat as a gift to a child it is charming to give a kitten. But cuteness is very transient. It is short lived and the most charming quality of kittens. But by the time they are around nine months of age they’ve lost a lot of that cuteness. When they are over 18 months of age they can look more or less like adult cats although they still have some growing to do.

Therefore, if you want to adopt a very cute cat you can do so for about six months then you’ve got another 30 times that length of time to enjoy your cat as a young adult and adult. On that argument, it doesn’t really make sense to adopt a cute kitten over an adult cat.

A lot of the other benefits are well-known. One of the first benefits is that an adult cat has developed his or her personality and therefore you can make a very accurate selection because what you adopt is what you going to take home and live with for the remainder of the life of the cat. With a kitten, it depends how they develop which of course is partly dependent upon the adopter. However, a kitten’s personality is essentially developed in the first seven weeks of their life and you won’t know how that will translate into adult cat personality because you don’t know what happened in the first seven weeks of the kitten’s life. How well is the socialisated for instance?

If you have children at home then older cats can be a better choice. Older cats are better able to deal with children because they are more patient and less likely to scratch a child who might manhandle the family cat. Kittens can be more unpredictable and might simply retaliate if mishandled by a child by biting or scratching. This can lead to a concerned mother who might not have trained their child to handle the kitten properly. This may even lead to the relinquishment of a kitten back to a shelter.

The Blackpool rescue centres referred to above, say that it is far more likely that an older person will adopt an older cat. It makes sense simply on the basis of lifespan remaining. An older person may decide that they might have about 10 years of life left and therefore to adopt a young cat would leave that cat without an owner on their death.

In addition, older cats know the ropes better and therefore they require less direct maintenance and one doesn’t really need to play with an older cat as much as a younger cat. This suits older people who have less energy.

Older cats are more settled and less destructive. If you adopt two kittens, for example, they might chase around the home like mad things tearing everything up and scratching your leather furniture. Okay, you accept it and don’t mind it too much but you can do without it sometimes. Young cats also tend to get intp trouble more easily and therefore in a strict sense require more monitoring.

Less likely to be hurt on the road

As nearly all domestic cats are indoor-outdoor cats in the UK, road sense is important. Older cats are more road savvy. Fewer adult cats are killed on the roads than younger cats. As I recall, females are less likely than males to be hurt on roads. Thereore a young male cat is in the most danger of being run over.

Older cats don’t need litter training although, that said, domestic cats take to litter very naturally and therefore this is not a great benefit if I’m honest.

In the era of overvaccination young cats are going to be the target of over-eager vets more than adult cats who’ve been vaccinated. It’s done and dusted for the older cat. This is one less burden for cat and guardian.

It may be the case that if you adopt and older cat from a rescue centre where he or she has been for a very long time that they will appreciate more the fact that you have adopted them. Often, you will read that older cats have been left at rescue centres for months on end, even for a year or more on occasions. When they are adopted into a nice new home their lives are improved. This should be translated into a happy and contented cat with a pleasant personality.

Don’t be beguiled by baby-faced cuteness

Don’t be beguiled by cuteness. It is transient. It passes rather quickly. Character is more important than appearance in the long term. Cutness is a short term quality.

SOME ARTICLES ON SENIOR CAT ADOPTION:

Video: POV-what a senior cat at a shelter sees and hears as adopters walk by

This is a TikTok video from photographer Albert Harris. It's a neat idea. He has put a small video camera ...
Read More
101-year-old woman adopted 19-year-old cat 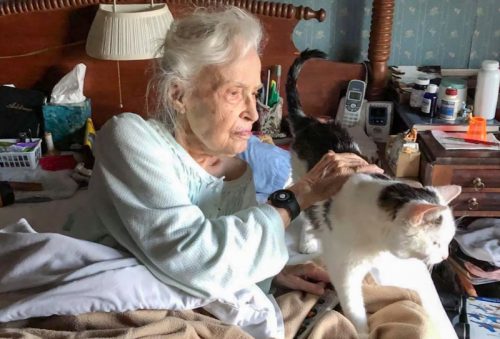 CATAWBA COUNTY, NORTH CAROLINA - NEWS AND COMMENT: In terms of cat adoptions, I think that the combined age of ...
Read More
This woman adopted this 20-year-old cat from a shelter because she didn’t want him to spend the end of his life alone in a cage 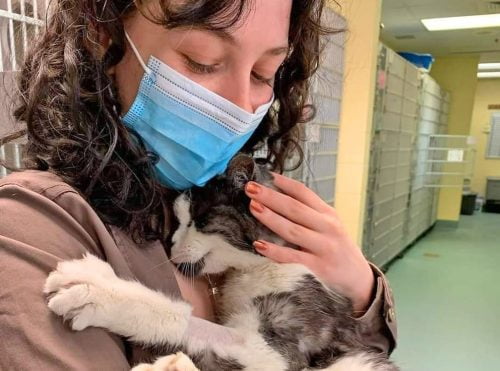 I have taken the words in the title direct from the Reddit user who posted the photo because they are ...
Read More
When do cats start to get old?

It is said that domestic cats start to get old at the age of seven but it is unfair to ...
Read More
Why is my cat thirsty? 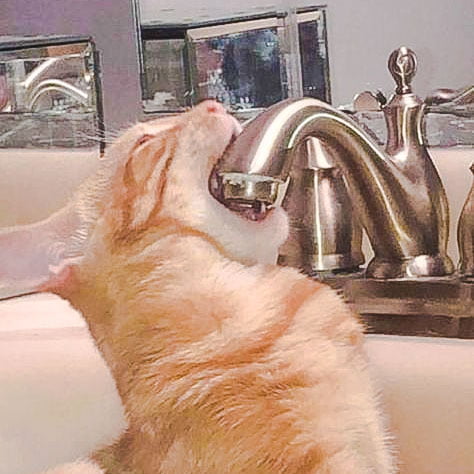 Your cat might be thirsty for a good reason. Perhaps she has just eaten dry cat food which should make ...
Read More
Should I get a kitten for an older cat? 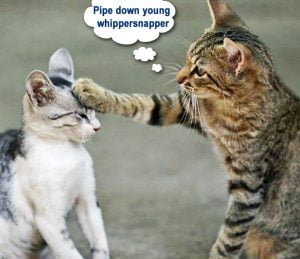 Should I get a kitten with or for an older cat? It depends whether they get on and you often ...
Read More
Impulsive senior shelter cat adoption before Ed Sheeran concert proved irresistible 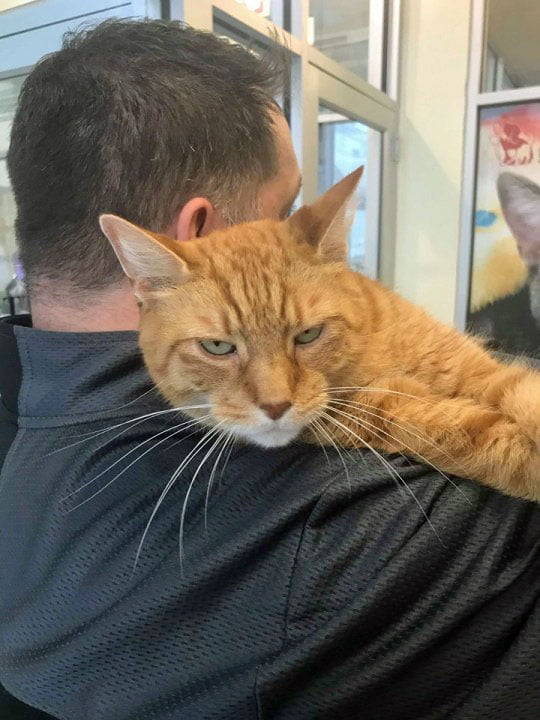 Couple Tiffany McClure her husband David arrived at the Ed Sheeran concert in Chicago early. They had planned a meal ...
Read More
Please comment here using either Facebook or WordPress (when available).