The name of the cat in the picture above is a suitable one for this breed (but see below about names). An outstanding feature is the Birman’s personality, which is balanced and good hearted.

By all accounts this breed has a fine and balanced temperament. In both the picture above of Happy and of Hidden below, the playful and inquisitive nature of this cat is well captured by Helmi.

The Birman is one of the more popular cats. In a cat breed popularity survey (currently running) on this site this breed ranks just outside the top 10 (at early 2008). There are about 70 breeds listed on this site. This cat breed may be more popular in the UK as at one time it was about 4th most popular. Of course popularity is a fickle thing.

The origin of this breed, in the Western World, is from the importation of a female Birman Cat from Burma into France (see below). This cat had kittens, the only survivor of which was a female, who was outcrossed with Siamese, Colourpoints (Himalayans) and White Longhairs. The development of the breed in the West had then begun.

Some, though, argue that the breed has been created after the war through selective breeding of Siamese and black and white longhaired cats (denying the importation story). You make your choice. The origin and history of the cat breeds is not infrequently hazy and sometimes (rarely) lacks a bit of credibility.

The Birman Cat is shrouded in legend going back to pre 653 BC (the birth of Buddha). In outline, the legend is that the coat of a white cat, the companion of a temple priest, turned into the Birman markings we now see when her master was murdered and when she faced the goddess of the temple, Tsun-Kyan-Kse.  These are quasi-religious stories, enjoyable but no more than that and certainly no help in establishing the exact origins of this breed.

However, temple cats are very much a part of life in Asia. They are either feral or adopted by priests or I presume people associated with the temple.

The picture opposite evokes, to a certain extent, the image created by the legend of the beginnings of this breed. It is a picture of a white temple cat in Burma and perhaps a young priest studying.

Some of the money made from this website goes to sponsoring an entire temple colony of cats in Phuket in Thailand. Update 2011: I have now stopped sponsoring the temple.

People search for breeders in Illinois, USA. Always visit the cattery. Here is a selection:

Rescue is important. Try visiting RescueShelter.com on this page for information. or Yahoo Groups. Birmancats seems like a nice group of Birman devotees. You might get some contacts here. These groups can be useful. Purebred cat rescue on this site might assist too. And finally a third party site: Speciality Purebred Cat Rescue. 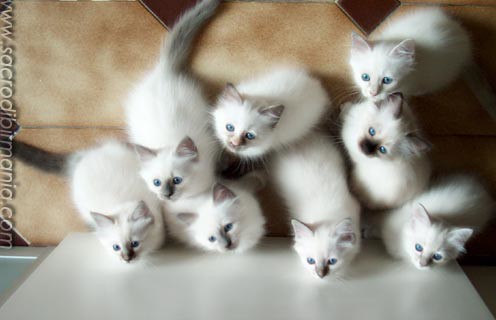 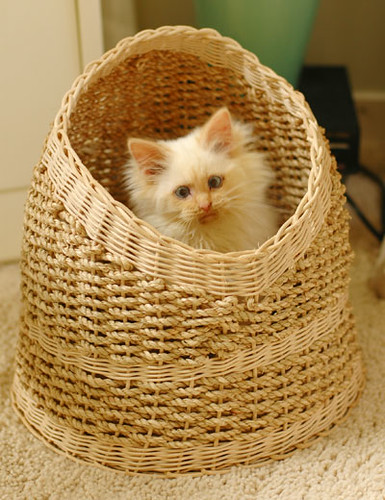 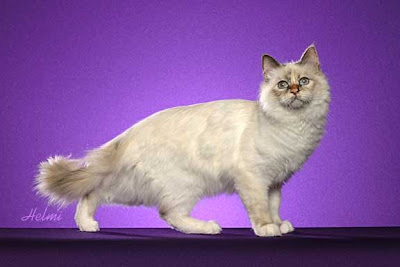 Another great Helmi photo of a blue point Birman – I think! 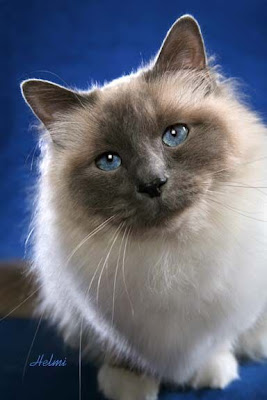 This cat has the standard colorpoint pattern and in addition white feet. This is very similar to the Snowshoe Cat in terms of coat color and pattern. It would be useful to have a look at the Snowshoe cat on this website, as the same genetics are at work.

The Piebald gene (white spotting gene) produces the white (gloved) feet in association with a “pattern gene”. The pattern gene is sometimes called the “gloving gene”. The gloving gene is naturally important to Airman breeders and the breeding programs are managed to retain it.

The white feet should ideally have a nice clean edge and be symmetrical. For the front feet the white “gloves” end across the top of the paws and for the back legs the white fur extends up the back of the legs ending about half way up hock. The white fur on the hind legs is referred to as “laces”. Laces and gloves should be evenly matched ideally.

Apparently, in the past, the gloving would ride up the legs. These “defects” were referred to as “runners”. They have been bred out over the years by breeding Airman to Airman.

The coat is not as long as the Persia’s (it has been bred long in the Persian – too long in some cases, I believe) and is therefore easier to maintain but grooming is still required regularly ideally. Apparently, the texture is such that it doesn’t mat so easily. The coat is described as being, “silky”1.

In short, the Birman cat is a semi-long haired cat breed. The torso of the cat has a color that is lighter than the points. This is somewhat disguised I think by the fact that the pointing is sometimes of low contrast to the background and the pointing itself can be (
for want of a better term) rather complex as for example in the seal lynx point (broken pointing). The background color should have a “golden cast” (Legend of the Cat)

Helmi’s great photographs show you the texture and color of the coat.

The lilac and chocolate where one of the first new colours to be accepted1.

The lynx points have the clear M mark on the forehead (tabby mark), spotted whisker pads and “spectacles” (white around the eyes).

The Birman Cat has almost round, blue eyes and a cobby (stocky) large body. It is the character that some might find the most appealing feature of this cat; intelligent, companionable, playful and pleasant.

August 2010: Latest addition: a collage of fine photos by Helmi Flick of ANGEL and a bit more.

When writing about health issues of any cat breed, I simply present what I see and read. I leave it to others to decide to act or not on the information presented by filtering out the useful. But I present all that I discover or know using sound sources.

My research indicates no outstanding health related issues with this breed. Except there may be an issue with Kidney and liver function.  Also in a book by Ross D. Clark DIM called Medical, Genetic & Behavioral Aspects of Purebred Cats (published 1992) the author states that some genetic lines have a tendency to have weak legs or nasal obstructions, leading to breathing by the mouth. He says that a disease called epibulbar dermoids was reported in “a” line (i.e. one line) of UK Birmans (remember this is pre-1992). A condition fairly well known in the cat world hip dysplasia (new window) is occasionally seen in the Birman cat.

A survey was very wisely and sensibly carried out in the UK by Dr. Danièlle Gunn-Moore, BSc, BVM&S, PhD, MACVSc, MRCVS and Dr Rebecca Richards, MA, VetMB, PhD, CertSAM, MRCVS. It is not clear when the research was carried out. I don’t know what steps people have taken to manage this or if people simply disagree.

It was a large and highly scientific analysis. In summary the findings where are follows:

The term COI is commonly used by cat breeders. Clearly breeders must find a balance between breeding closely to enhance the cat’s “type” – appearance (make the cat as “typey” as possible) and health (breeding more widely to avoid a higher incidence of defects due to “defective” genes that are recessive).

A COI of more than 25% is considered high and is equivalent to a parent to child or brother to sister mating. This would indicate to me that the Birman COI mentioned above is too high. It is recommended to keep the COI below 20% (src: http://web.archive.org/web/20150506035234/http://www.bijoupoodles.com:80/COI.html – a dog breeding site but I am sure the same principles apply)

There is often a difference in regards to cat breed health between the USA and UK. This research should not in my opinion be taken as representative of the USA Birman cat. This research is bravely (and in an enlightened way) presented on a British breeders website. I would like to commend them because it can only serve in the long term to help the breed. You can see the full text here: http://web.archive.org/web/20090414184101/http://www.chosenhill-birmans.co.uk:80/veterinary.htm – link broken at 29th August 2011. This link will also take you to the cattery website. The cattery owners are Alwyn & Ted Hill.

Update July 2010: A discussion on the prevalence of Feline Infectious Peritonitis (FIP) in cat breeds. The Birman comes out badly, I am afraid.

I am reporting what I see and no criticism is intended. See also Birman health problems expanding on some of these.

The above picture links to a large format high quality version together with some notes about how the photograph was captured.

If the convention is followed, the first letter of the name, in the USA, should begin with “A” for cats born in 2003 (it was “Z” for 2002). For each subsequent year the first letter advances through the alphabet.

] where Birmans come first (and they mean this). Located in the UK. Formed 1999 and affiliated to the GCCF.

Next some birman kittens for sale. Here is a short list of breeders. I would also check out TICA and CFA breeder referral lists. These are the two top cat associations and they do list breeders.

There are of course many more breeders of this cat than listed here, but these are the only cat breeder sites, as non-directory sites, in the first 30 Google listings.

Update June 2010: Since creating this v.short list I have built a pop-up page: Breeders

Located near Salisbury, England, Breeding for about 20 years (at 2008).

From Birman Cat to Home Page