The birth of a new cat breed is being acted out on the island where the most ancient evidence of the domestic cat was found – Cyprus (note: the article was written around 2009). In 2001 a French archaeologists discovered a human grave that was assessed to be 9,500 years old with a pet cat next to the deceased person. The site was in Shillourokambos. Experts have decided that the domestic cat evolved from the Near Eastern wild cat some 9,500 years ago. The grave was evidence of the earliest example of cat domestication. 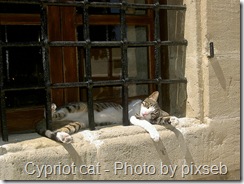 There is then a very long (the longest) history of domestication of the cat in Cyprus and yet they have not (until now) laid claim to their own naturally occurring purebred cat. There are many cat breeds that are exclusively linked to a country where they are said to have evolved naturally and then been“discovered” by a breeder. Having been discovered the cat was then developed into a well known and established breed. Examples are the Siamese (Siam – Thailand), Chartreux (France), British Shorthair (Britain), Japanese Bobtail, Manx and the Turkish Angora and Van to name a selection only.

It seems that the Cypriots have decided it is their turn to have their own cat but there is competition. The cat fancy worldwide has well and truly moved on from the days when the breeds above were discovered. There are many more breeders and it is more commercial.

It would seem that the chance to start a new breed that originates from the home of the domestic cat (Cyprus) is very enticing and there is competition from cat associations and/or breeders in other countries to turn two types of cat in Cyprus (presumably domestic, semi-feral and feral) into a purebred cat.

Is the Cypriot cat the same as the undeveloped Turkish Van?

DNA testing by Davis University, California would seem to have established that there are two types of unregistered purebred cat in Cyprus and the Cypriot Feline Society would like them to be recognised as cats that are exclusively linked to Cyprus. These cat types have been called:

Probably, the problem is that other cat associations are better placed to develop the cat and turn it into a cat breed. I suspect that the Cypriot Feline Society is not as active as those in the countries such as England and the USA.

Apparently, associations or breeders in Turkey and Germany are interested in developing the new breed. There was a flurry of new breeds in the middle of 20th century but later in the century there was a tendency to over develop; to create a breed too far out of nothing. So a new breed from Cyprus that has a natural pedigree in place already as the birthplace of the domestic cat must seem attractive to breeders looking to develop a new cat breed.

So will the birth of a new breed happen? Cyprus better get their skates on. Without wishing to be unkind it seems that the block of countries in the area, Turkey, Greece and Cyprus are not that into the cat fancy thing. The Aegean cat that lives on the Cyclades Islands off the Greek coast is an example of a semi-domestic cat that is meant to be a purebred cat breed in the making but its development seems to be firmly fixed in the infancy stage. However, the Cypriot Feline Society held there annual cat show at Grosvenor beach. So there is an active cat fancy in Cyprus. 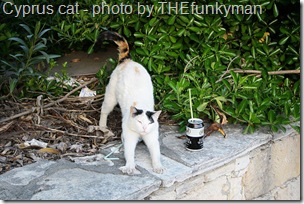 Above - Cypriot cat that has the classic Turkish Van marking. I will take a guess and say that this cat is an Aphrodite. Is this cat going to be a part of the birth of a new cat breed or is this just an undeveloped Turkish Van?

It is interesting, though, to see the possible birth of a new cat breed. It is a shame that we do not have official photographs of the two cats. Although the cats wandering around Cyprus as illustrated on this page (of which there are many) are probably the cats being talked about. As the climate is very hot in Cyprus I would have expected these cats to be classic tabby and white or solid and white cats and a short coat and the photos bear this our (see Flickr photos on this page published under a Attribution-Non-Commercial-No Derivative Works 2.0 Generic license). It seems that some resemble the Turkish Van (see photo above taken in Omodos, Cyprus), which has a solid and white coat with specific markings. Could some of the Cypriot cats be Turkish Vans? The countries are neighbours and this would seem very possible.

Now, how will the cat fancy “refine” them? Leave them alone, I say.

Here are some photos of the Aphrodite and St Helen's breeds from Cyprus.

Good examples of the Aphrodite breed have been exhibited at several WCF Shows in Germany and Italy and rec ognition should take place some time this year.

DNA samples of the the 2 new breeds have been submitted to UC Davis and the results are expected shortly.

Birth of a New Cat Breed to Cat Facts