Bison at A1 Savannahs!

There is a Bison at A1 Savannahs and I just had to photograph it. This is a magnificent animal with a massive head. They can weight 2000 pounds and can travel at 30 mph. It is said (and this is unconfirmed) that they were second only to the brown bear as a potential killer. The brown bear being at the number one spot. 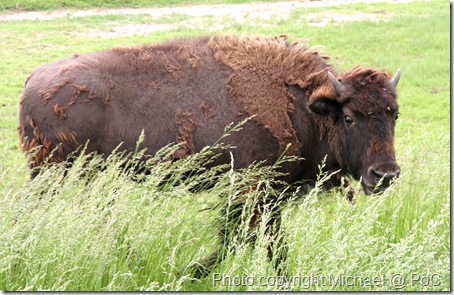 This is a young Bison.  They are the the largest terrestrial animals in North America and Europe.

The Bison has few predators due to its large size. It likes to wallow. Its main food is grass.

At the time this photograph was taken she (she is a female Bison) was just in front of the house at A1 Savannahs, grazing. I was on the computer, building and publishing a page on Savannah kittens at play and sleep. I saw this young Bison because she had wandered into my view and I decided to meet up with her.

Once I arrived and approached to within about 15 feet she decided to clear off – sensible really. Humans are the top predator.

Here she is with her goats in tow. The goats seem to follow her keeping her company. They seem to be very friendly towards each other: 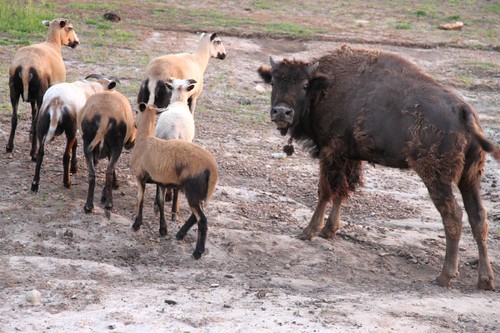 Buffalo with her goats following

From Bison at A1 Savannahs