This young black panther (probably a black jaguar) is having a hard time living in the human environment. Firstly, and we don’t know how, she ended up as a pet in somebody’s home in northen France and then escaped onto the roof resulting in an alarming photograph which you can see below about which I wrote an article earlier. 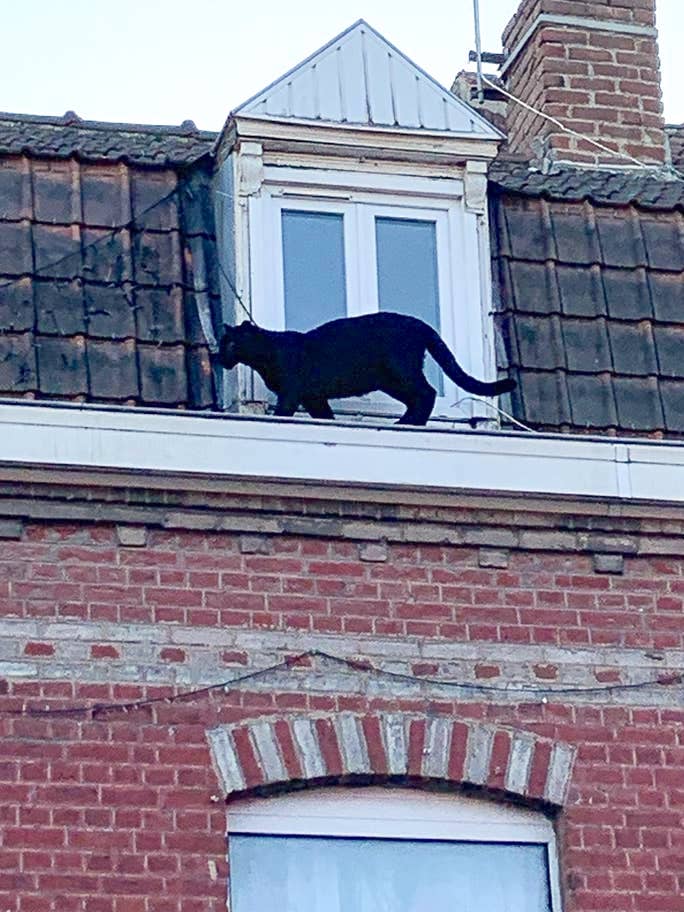 The cat was captured and taken to Maubeuge Zoo near the Belgian border, where she was being held before a planned transfer to an animal refuge in central France today.

Before the transfer could take place, somebody stole this beautiful animal from the zoo. The theft comes amid concern over the big cat lack market in France. These cats have become a status symbol on lawless French estates.

The thieves had cut through six padlocks as they forced open a security door and the panther’s cage during a night raid. Zoo workers discovered the theft when they arrived for work.

The panther is believed to be about six months of age and is a female. She was in poor health when captured from the rooftop and I’m now told by The Times newspaper that her claws had been mutilated. This is probably a crude attempt to declaw this cat. If true it is a shocking revelation. It’s absolutely abysmal the sort of treatment that these idiot abusers dish out to beautiful wild cat species who simply should not be in people’s homes in mainland Europe.

Apparently, the panther is believed to have climbed out of the second-floor window of her owner’s home and walked along a rooftop and into a neighbour’s bedroom. The cat then went down the stairs of the neighbour’s home whereupon the neighbour’s 18-year-old daughter saw the cat and believe that she was suffering from hallucinations as a result of what she saw and the effects of an anaesthetic that she had taken for a wisdom tooth extraction

The Fire Brigade arrived and sedated the panther who behaved like a domestic cat. They believe that the person who supposedly owned the cat had no right to own her. Officials are searching for this person.