There are probably three things about blue tigers that are worthy of coverage: (a) the interesting writings of an early tiger hunter and missionary, Harry R. Caldwell, which reveal a lot about us and our relationship with wild animals (b) the genetics involved and (c) the rarity of this animal.

The blue tiger (Maltese tiger), is a reported but unproven coloration morph of the tiger, once observed in the Fujian Province of China. It is said to have bluish fur with dark grey stripes. Most of the Maltese tigers reported have been of the South Chinese subspecies of tiger.

Records of observations of blue tigers tell us that they had slate-grey or black stripes on a pale grey body. Sarah Hartwell says that there have been sporadic sightings in the mountains of the Fujian province in China. She says that the colour variant or morph may have been caused by the “non-agouti gene (causes melanism or solid black colour) and the colour dilution gene (converts colour to a washed out hew i.e. black to blue). She distinguishes the blue tiger from the “smoky blue pseudo-melanistic tiger” one of which was born in Oklahoma in the 1960s.

Blue tiger. Photo in the public domain. I have no information about this photograph. It implies that a blue tiger exists today but I don’t think they do in any shape or form. It is probably a photo edited version of a Bengal tiger.

Hunt for blue tiger as reported in 1916 (March 28th). Vancouver Daily World. My thanks to Sarah Hartwell.

The writings as set out by Sarah Hartwell on her website are fascinating if a little gruesome for an animal lover. Caldwell was both a missionary and a killer of tigers. These two careers are probably still compatible, sadly. He loved the appearance of this tiger. He observed one in 1910.

“The markings of the animal were marvellously beautiful. The ground colour seemed to be a deep shade of maltese, changing into almost deep blue on the under parts. The stripes were well defined, and so far as I was able to make out similar to those of a tiger of the regular type.”

Yet he was determined to kill it, to possess its skin and saw nothing unusual in these two conflicting points of view. If he had killed it (mercifully he never managed to) he would have extinguished that which he found beautiful. It would seem that he only found the pelt, the tiger’s hair on its skin beautiful, the rest he could willingly throw away. But this seems strange as the two are one. And being a missionary should have told him that it was wrong. Although in 1910 the mentality of humankind towards the tiger in general was very different to today. They were pests to take pot shots at. He was tracking the blue tiger in China, Fujian Province, in the South:

Apparently, the few blue tigers that there were at that time (and less now of course – are there any left? I’d be surprised if there were) were referred to as, “blue devils” (“The World Of The Tiger” by Richard Perry), as they were often man eaters. I am not surprised. They were, it seems, endlessly hunted by mankind and/or had difficulty in finding its usual prey. We like to hunt the rare and precious and possess it and in doing so we make it rarer and ever more desirable and vulnerable. Perhaps these rare tigers were injured by hunters and forced to go for easy prey, humans? These are the kind of reasons why big cats become man eaters (see Man Eating Leopard).

Caldwell referred to the blue tiger that he and his colleague tracked as:

“the ‘Great Invisible’ [referring to elusiveness of tigers] and it seemed impossible that we should not get him sooner or later, but we never did.”

The blue tiger, indeed any tiger, is still the great invisible, avoiding humans if possible. And here is the interesting dichotomy. This cat is supposed to approach humans to attack and eat them and also be near invisible to us. What is it? It is both. Both forms of behavior are in reaction to our behavior. The blue tiger will avoid us as we are not its usual prey and we are dangerous to it. But, as mentioned if we injure the cat or destroy its prey it will chance its luck and look to us as easy prey.

Image credits: Orange tiger by Goneys – White tiger by Anderson Mancini – Blue tiger unknown author. Click on the image to read an essay on the tiger in Chinese 😉.

There are other genetic mutations in the tiger world. Take the endangered white tiger (none left in the wild. They are all in zoos). As in the domestic cat world there are genetic mutations, which are often due to recessive genes that produce abnormal characteristics. Here is yet another seeming dichotomy.

In the domestic cat world, the cat fancy, we seize upon interesting genetic mutations and sometimes breed more of these rare cats. There are numerous examples: Devon Rex (crinkly hair) and Sphynx (little or no hair) and many more. Yet in the wild cat world we shoot them and hang them on the wall or place the skin on the floor. The motivation is, in fact, the same. We like to possess the rare. We cannot possess a live blue tiger – too problematic and too expensive so we kill it and possess what is left of the tiger, the rare bits, the skin and sell the penis for medicinal purposes! The domestic cat can be possessed, the law allows it, and so we simply breed more of what is or was rare.

What causes the tiger to become blue? This tiger retains its stripes. Both the stripes and the ground color become blue or slate grey. More accurately dark grey stripes and bluish fur. People are not sure of the answer to this question. Cat genetics for domestic cats is not fully understood. The blue tiger is also called the Maltese tiger after the cat fancy term meaning slate grey coloring after, apparently, cats in Malta where there is a preponderance of them.

A typical purebred cat that is Maltese colored is the Russian Blue. It only comes in this color. There are other Grey Cat Breeds. These are the genetic possibilities, proposed, that produce the blue in the blue tiger:

I am going to stick my neck right out and propose the following. I expect to be shot down in flames! The tiger is basically a tabby cat. The genetics for mackerel tabby cats is A (agouti) + B (black) + D (dense coloration) + Mc (tabby gene) (Robinsons Genetics 4th Ed). If we dilute that we get a cat like the American Curl on the left below (the cat on the right is non-dilute version or brown mackerel tabby: 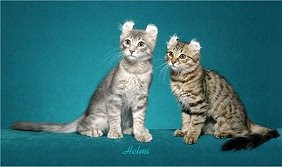 If we add the recessive dilute gene dd -called maltese dilution we get a cat (on the left) that has the same coloration on a fundamental level as the blue tiger, it seems to me.

Well, the cat is rare because it is a recessive gene that pops up (popped up, past tense perhaps) from time to time but otherwise suppressed. Also, it is or was hunted. There are no blue tigers in captivity (src: Messybeast). There are no photographs of this tiger. There are no pelts in museums. A blue tiger was reportedly sighted during the Korean war (but no current evidence exists of this, it seems). And they have been reportedly seen in Burma, the land where they kill tigers for exportation of tiger parts to China (once again no evidence). So, the wrong place to be a blue one. I doubt this tiger exists anymore. I would like someone to disabuse me of that notion by leaving a comment, please.

Update: Christmas day 2021. I am revisiting this page and brushing it up to make it presentable for Christmas day about 14 years later. Yes, this post was written about 14 years ago. There are no blue tigers left in the wild and there are none in zoos either to the best of my knowledge. They are entirely extinct and an anachronistic historical curiosity. Wrong? Tell me, please.