The Borneo Bay cat range, as at 2009, is presented in a Google My Maps map below. The range may have shrunk a little as at 2019, the date of republishing this page.

This cat is also called the Bornean cat or Bay cat. The purpose behind presenting the range in a Google map prepared by me, is to allow it to be updated in real time, all the time without the need to prepare a fresh map.

The range of this cat has shrunk dramatically exactly in line with the rapid deforestation of the island. The range more or less follows the boundaries of the forests of Borneo. It is very short sighted of governments to allow such reckless logging and the projections indicate that in 2020 there will be only a small percentage of the forest left compared to the 1950s. NUMBER OF MATURE INDIVIDUALS AS AT 2019: 2,200.

If you have knowledge of the whereabouts of this cat ideally through direct contact and experiences please feel free to amend the map, which is a public document and which can be seen here: 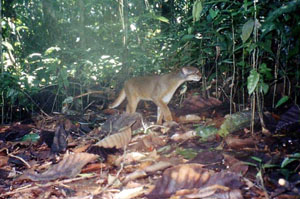 The Bay cat only occupies the island of Borneo. The cat is extremely rare even to local people. The first photograph of this cat was taken as recently as 1998, in captivity, but at an undisclosed location (probably reflecting its value to the trappers – it is all about business). Its rareness makes it even more vulnerable to being trapped and shipped to zoos making it rarer still. It is an unpleasant, man made, cycle. It might be argued that captive breeding programs and zoos are responsible with the loggers of gradually destroying this species of cat. I thought zoos etc were in the business of conservation?

This cat is reported to live in dense forests. Not much can be said about the Bay cat because not much is known despite being classified as endangered by the IUCN Red List of Threatened Species™ (Red List) with the near certainty of being reclassified Critically Endangered at some time in the future, surely? The map is based on the Red List map. See more on this cat: Bornean Bay Cat.

The photo above (2nd down) of this cat was taken within the south western part of the Borneo Bay cat range: this is copyrighted material, which I publish here arguing fair use as this site is for charity and its purpose is to try and help the conservation of the wild cat species generally and this most rare cat in particular (in respect of this page). From Borneo Bay Cat Range to Wild Cat Species.