Lilac Burmese cat - Photo by deeleea - this photo was uploaded by Michael (Admin) to illustrate the breed only. There is no connection to the article.

My first Burmese was a cat from the Sangazure line. A tiny contemporary Burmese with a personality that was like a child's. Loving, hilarious, mischievous, acrobatic as a monkey, generous to small children and delighted with advances from anyone, including dogs and strangers.

She cuddles like she's made of velcro and she flirts shamelessly with everyone. She has been the love of our lives and, having had cats my entire life, I can say with certainty that we will never have another that compares. 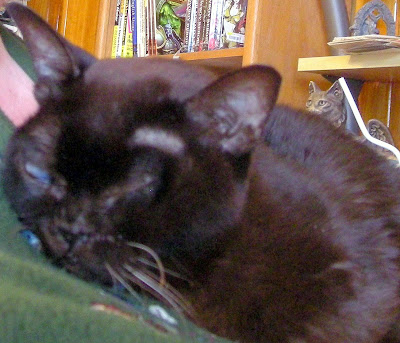 Photo above: I've snapped a quick photo of my poor Minkus' face to illustrate my point. She's still active enough that she can jump from the floor to my shoulder despite the fact that she's nearly blind and utterly ancient.

When I got her, she'd just finished surgery for double cherry-eye. The veterinarian who did the surgery destroyed her tear ducts, so over the years the porphyry and other junk sticking her eyes together and running down her face has gone from an annoyance to a real crisis. Unbeknown to us (and them), the breeder had a rampant strain of feline herpes ripping through his cattery, and her delicacy made it a given that she would have a (constantly) active case.

Despite the fact that we treated her for that daily with lysine and colloidal silver (
for a short period), in her eighth year she developed an eye ulcer and we had to have a graft performed so that she might keep the eye. The sneezing and continual nose and eye drip made it more difficult for the eye to heal.

It ran us thousands, and while I will never regret doing it, I know that not many out there have the resources or desire to commit what we did to keep our baby comfortable and happy.

Then in her 13th year, the other eye ulcerated. We spent huge amounts to have a graft done on that eye, but this one didn't hold. We finally had to remove the eye altogether. Poor darling!

But the misery isn't over... She now has hyperthyroid. While lots of older cats develop it, Burmese are small enough to begin with that it really puts them into danger to lose so much weight.

She's sixteen now, and our (very good) vet checks her regularly, and lets us know that she's feeling alright. She also tells us that she'll let us know when it's time (you know - TIME).

I love this animal as thoroughly as any member of our family, and I grieve that she's had such pain and misery due to the delicacy of her breed.

BREED FOR HEALTH FIRST, BREEDERS! Because the animals suffer, and we the pet owners suffer with them.