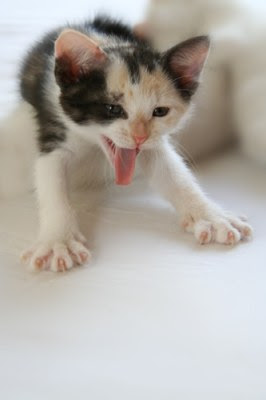 Calico cats are not a cat breed. “Calico” is the USA term for a cat with a tortoiseshell and white coat pattern and color. In the UK these cats are called “Tortoiseshell-and-White” cats. I prefer “Calico” as it’s quicker to say.

Where does “calico” come from?

You have to go back to the 1600s and perhaps earlier to answer this. In or around the 1630s a brightly printed cloth (block-printed) was imported from Calicut in India (opens to Google maps, new window) to England. It looks as if the British (as is their habit) decided to change the pronunciation of the town “Calicut” to calico when applying it to the description of cats that had bright colors and patterns. In Britain, the word also meant a plain white cloth. Perhaps this is a reference to the white in Calico cats.

It seems that the town Calicut is called Kozhikode by people living in India. It is in or near the Tamil Nadu region of India in the South West. Ironically, this is about 200 miles from the region where some (a few) Indians kill and eat domestic cats.

We know then that Calico cats are brightly colored with white. The patterns are asymmetrical (messed up). The next question is:

What colors make up a calico cat? 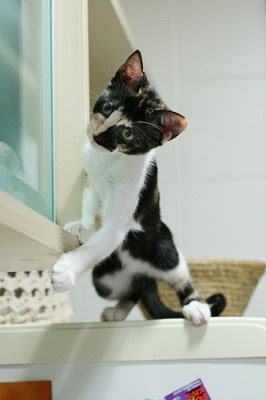 The colors are essentially red, black and white. Red and black together is tortoiseshell. It is better to discuss the calico cat in terms of what makes a tortoiseshell cat first then add in the white afterwards.

The making of a Tortoiseshell cat

One allele (one of a pair of genes) of the O gene (capital ‘O’) is a dominant gene and is carried on one of the X chromosomes. This gene produces orange fur by turning black fur orange (red technically). Orange fur is due to the production of an orange pigment called, “phaeomelanin”.

The other recessive allele is carried on the other X chromosome. This recessive gene (signified by the lower case ‘o’) produces black fur (one of two Wikipedia articles says “non-orange” fur). Fur is black due to the production at the direction of this gene of a pigment called, “eumelanin”.

This state of affairs is heterozygous (Oo – one dominant and one recessive gene of a pair of genes).

As a result, we have a mix of black and red fur making tortoiseshell

. The proportion of black fur to orange fur is dictated by turning off (deactivating) one of the X chromosomes. If the orange is turned off the cat will have more black and visa-versa. 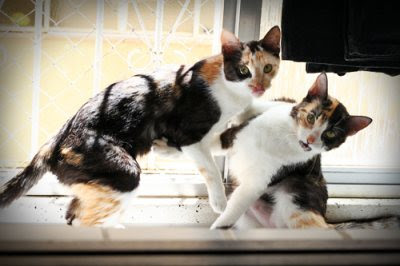 Cat Breeders make the red coloration richer and more intense than it otherwise would be by the use of “rufus polygenes” through selective breeding and further by the presence of the classic blotched tabby (genotype O(O)mcmc) instead of the mackerel tabby.

This is relatively simple. This is caused by the action of the white spotting gene (also called the piebald spotting gene), which is semi-dominant and has what is called “variable expression” (it is highly variable). Its effects are found in:-

The last of these is the tortoiseshell color, and pattern, affected by the tabby (Agouti) gene. The tabby gene gives us the Tabby cat. Click on the link to see a post about the Tabby cat.

The white spotting gene affects the migration of pigment producing cells during the embryonic stage of life. These cells migrate from the spine and if their migration is inhibited the extremities are left without pigment, hence for example, Snowshoe cats. The process varies leading to a range in quantity and position of white fur. 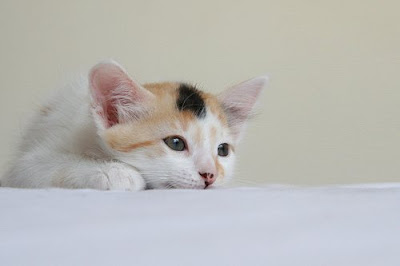 The genotype (genetic configuration) for calico cats is aaOoS-. The letter “a” stands for non-agouti (self or solid coloration), the letters “O” and “o” are mentioned above and “S” stands for the dominant S allele that represents the white spotting gene.

The tortoisehell color can never be “true breeding” (all offspring are tortoiseshell – true to type or appearance) as a tortoiseshell cat has to be heterozygous in respect of the genes that produce the coloration.

As mentioned there is a wide range of calico cat appearances including cream, blue cream, chocolate, lilac and cinnamon. You can breed a tabby calico as well by substituting the aa genes for the Agouti A gene.

Update: A bit about calico cat history. People search for this. Of course the calico cat is not a breed of cat but a coat type. I suspect that this coat type evolved after the domestication of the cat some 9,000 years ago through random breeding (there are no calico African Wild cats which is the wild ancestor of the domestic cat).

Most cats are random bred cats (moggies) so somewhere in the 9,000 year process of random breeding of feral and domestic cats the tortoiseshell and calico came about and the first cat of this type was randomly created.

Update May 2010: What about calico cat behavior? There is quite a bit of talk about it. I have researched this and my conclusions are here: Calico Cat Behavior.

Update 6th June 2010: A visitor, Kellie Vincent from Ashford, Kent, UK, made a short submission about her cat:

“Hi there..I bought Alfie at 7 weeks of age. I knew immediatly he would be coming home with me. He had such a chisled yet handsome face. We nicknamed him Houdini as he loves to hide.

When taking him to the vet for his vaccinations, he told me that ‘Alfie’ would need a name change, as he could not possibly be male. You see, Alfie is a tortoiseshell, and after examination, my very stunned vet confirmed, IS male.”

Alfie is actually a tortoiseshell and white cat and here he is:

See some more on why it is wrong to search for “calico cat breed“.

From Calico cats to Home page