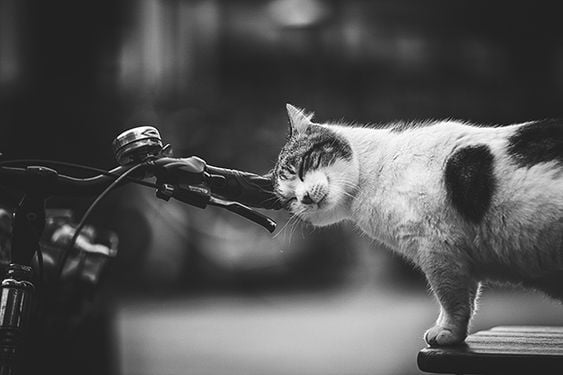 One factor which dictates whether an abandoned domestic cat could survive is climatic conditions. In Australia the feral cat population is quite large. They all originate from domestic cats belonging to settlers. Australian feral cats are successful predators. They survive quite nicely because wildlife is abundant which is why the authorities dislike them because they kill native species.

Dr Bradshaw, a cat expert, sums it up to a certain extent when he writes:

“A pet cat that has never had to hunt to survive would most likely perish if abandoned somewhere remote.”

This implies that an abandoned domestic cat in a populated area, such as suburbia might survive for various reasons one of which is that food may be available, neighbours might take the cat in or feed the cat as an outdoor cat and so on.

It depends too on the cat’s personality. Some cats are far more suited to being independent stray animals. I remember a stray cat living in communal gardens in a block of flats where I lived and he did very well. He was quite aggressive, unneutered and a survivor. He lived entirely outside. He had the habit of stealing cat food from kitchens as he walked through cat flaps or open windows. So where food is abundant and the weather isn’t too harsh an abandoned domestic cat may well survive fairly comfortably.

My mother’s cat voluntarily went back into the wild and lived on a golf course opposite her home for almost his entire life. He returned home towards the end of his life because he was riddled with arthritis. My mother put him down which I disagreed with.

In many parts of the world almost all cats live outside and are fed by the community. They are called community cats.

Some people claim in the strongest possible terms that all domestic cats would not survive if abandoned in the wild. I disagree because the claim is extreme. As Dr Bradshaw says if the cat never had to hunt and the area is remote he probably will die of starvation but under more favorable circumstances there would be a chance of survival.

The bottom line is that the answer is not black-and-white. It depends, and the life of a feral cat will be generally shorter than for a cosseted domestic cat in a warm, secure loving home. However, I don’t think you can say that all feral cats have a life shortened to about three years as is claimed. There is not true my opinion.

We see a lot of talk about feral cats’ lives being short and brutal. Sometimes it’s true but it doesn’t apply to every feral cat. Where there are well-managed feral cat colonies by TNR volunteers in Mediterranean-type climates you may find that the lives of feral cats are not that far short of those of domestic cats.

If some feral cats can have a life of decent length because of the circumstances under which they live then the same can apply to domestic cats who have lived both indoors and outdoors and have become able hunters.

This is not to say that abandoning domestic cats is acceptable. It certainly is not and is probably a crime under prevailing animal welfare laws.