Too often a failure?

Can a serval make a good pet? I believe that I’m qualified to answer the question despite never having a serval as a pet. I know that some people do keep servals as pets, particularly in America, and as an outside observer it appears to me that all too often it’s a failure or let’s say unsuccessful. 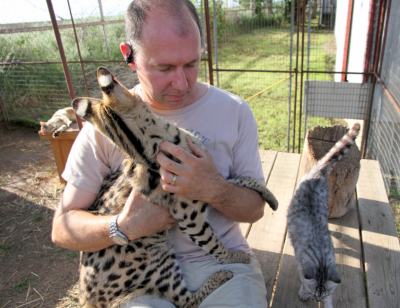 I can remember visiting A1 Savannahs, the cat breeder in Oklahoma, many years ago. I stayed on the farm for about 10 days. There were many enclosures, nearly all of which were for breeding cats. However, one enclosure contained a declawed serval, whose name was, or still is, Serena.

I entered the enclosure to photograph Serena. She used to be someone’s pet but had been abandoned to A1 Savannahs. I guess there was no other suitable facility able to take her.

You have to come to the conclusion that in this instance keeping Serena as a pet was a failure. Further, to declaw the cat was an indication of the inherent failure of trying to keep a serval as a pet. If you have to declaw i.e. mutilate a cat in order to make the relationship acceptable then it should not be a relationship at all.

I inadvertently provoked Serena as you can see in the video below. Although she allowed me to be in her enclosure which was about 30′ x 30′, she was nervous of me. Her nervousness may have been exacerbated by the declawing.

I also visited two other servals in another enclosure. They were Mr and Mrs and they were there to breed and produce kittens for sale. I remember photographing the male serval who was quite a large animal. I got quite close to him and he swiped me with his forepaw. It hurt. Servals have big claws and can be quite large, far larger than domestic cats. They are, after all, a medium sized wild cat species. 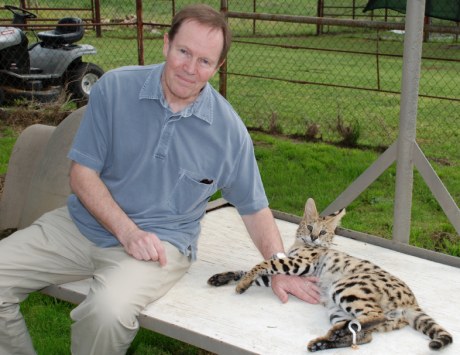 Me and a tame serval. Taken about ten years ago. This little guy is not Morpheus, the cat I refer to.

You can see, then, why the woman who abandoned her serval declawed her. Servals are quite retiring and unaggressive compared to other wild cat species. This is why people attempt to live with them and believe that they can domesticate them. They want to possess an exotic cat as a sort of status symbol.

My personal view is that servals do not make good pets. This is because they are difficult to domesticate (if they can be domesticated at all) and in addition you cannot let them roam outside like you might let a domestic cat. If you let a serval roam around the neighborhood he or she would be shot quite quickly because terrified residents would call animal control.

Therefore you have to keep a serval in the home together with (ideally) an outside enclosure of sufficient size. This all adds up to further expense and an unappealing arrangement for many people.

Over the years, I have read many stories of servals escaping from people’s homes where they were confined. They invariably end up being killed one way or the other either on the road or shot out of fear that the cat might hurt somebody. Sometimes they are trapped but this outcome is less common than the termination of their life.

All in all, and I stress that this is a personal view, servals do not make ‘good’ pets. They might make a pet but not a ‘good’ one. At best they will make an adequate pet with the right person with the right facilities and enough money.