↓
Home→Cat Food→nutrients→Can a vegan diet for a cat be acceptable?

I’m going to play devil’s advocate and write something provocative. Can a vegan (or vegetarian) diet for a cat be acceptable? I believe that it is a question worth asking. I don’t think that we should criticise the idea of feeding your cat a vegan diet out of hand without thinking about it carefully. And the fact that they exist and no one has sued the manufacturers is perhaps telling. 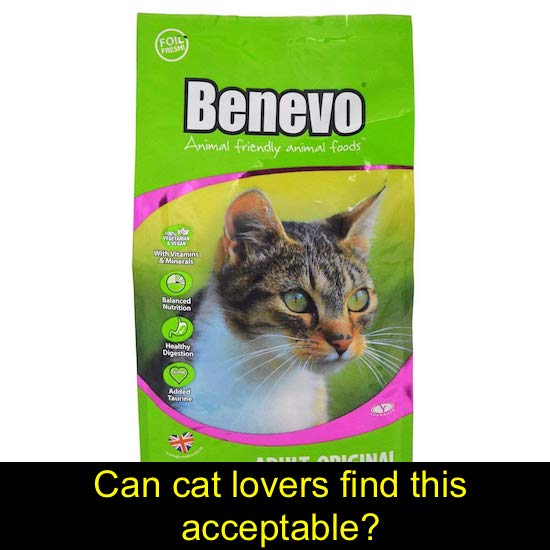 The reason why I say this is because we know that cats have specific dietary requirements and the nutrients that they require come from eating animals. However, a veterinary specialist in animal welfare science and the Professor of Animal Welfare and Ethics at the University of Winchester (Australia) makes an important point. He says that there is a difference between specific dietary ingredients and specific dietary nutrients.

There are, on the market, commercially available vegan companion animal diets which do this. Apparently, studies have demonstrated that animals (and I presume he includes domestic cats) can be perfectly healthy when feeding on nutritionally sound vegan diets. He refers to a study by Knight & Leitsberger carried out in 2016.

Now I know that cat lovers will hate the idea of the suggestion that it is possible to make a commercially prepared cat food based on plants. However, there may be advantages because we know that existing cat food is often based on very poor quality ingredients even though they are meat-based.

There is a guy in Australia, Harry Bolman, who received a barrage of abuse online when it got out that he feeds his cat a carefully prepared vegan diet. He said:

‘Uma is my first cat…she has been a vegan cat ever since I first adopted her. She absolutely loves a vegan diet. I will boil some pumpkin and mash it up with the dry vegan cat food and she chows it down like there is no tomorrow. Uma is very healthy.” (I presume the reference to ‘dry vegan cat food’ is a dry commercially available food he buys locally)

He goes on to say that his cat has a great appetite and is full of vitality. He complains about regular processed commercially available cat food which he describes as abysmal. He said:

“It’s just bits and pieces of different animals which is absolutely revolting. There is no way out feed my cat that”.

I get his point by the way. Like I said it’s about nutrients rather than ingredients. The important question is: does the food contain the required nutrients to sustain a domestic cat? As long as the manufacturers have included essential amino acids such as taurine and arginine, is it fair to criticise a person who is feeding their cat a vegan diet?

I know that a person who is a vegan cannot justify feeding their cat a vegan diet because they are a vegan. It is wrong to impose one’s ideology upon a companion animal. However if the argument is changed to criticise existing cat food (and it can be criticised) and say that a specialist vegan diet formulated for a cat might be better, I think is difficult to argue against that.

The counterargument is made by a veterinary surgeon writing for The Telegraph newspaper. His name is Dr Pete Wedderburn. He is not convinced that a commercial non-meat cat diet has been proven to be adequate through proper feeding trials. He is not convinced that such a product is available at the moment. He makes the classic argument that it is wrong for strict vegan cat owners to force their cats to be vegan.

If you are sharing a home with an obligate carnivore he argues that it is unfair to ask them to change their natural way of feeding to fit your personal beliefs. Yes, I agree with that wholeheartedly but I’m not sure that it is correct to say that a satisfactory commercially available vegan cat food is not yet on the market. Also, as mentioned, if you put aside the personal beliefs of the cat owner and focus on the cat food is it not beyond the bounds of one’s imagination to see that a vegan cat food with supplemental nutrients is okay?

What do you think? I’m not supporting either party. I’m just discussing the subject and asking questions.