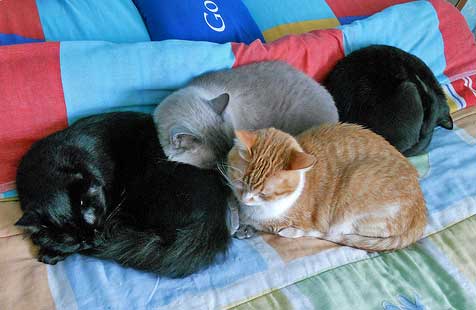 The classic veterinary response with respect to transmission of the feline immunodeficiency virus (FIV) is that it occurs when a FIV positive cat bites a non-FIV positive cat and it may be passed if a queen becomes infected while pregnant and passes the virus to her unborn kittens. In fact the well-known Drs Carlson’s and Giffin’s Cat Owner’s Home Veterinary Handbook has stated in one edition that FIV positive cats should be isolated from other cats. This information would seem, now, to be out of date.

Important research carried out by Anette Litster on cats at two rescue centres found that there was no transmission of the virus between FIV positive cats and non-FIV positive cats, both horizontally or vertically.

In one cat rescue centre there were 138 cohabiting cats of which eight were FIV positive (six male neutered and two female spayed). After several tests over years of exposure between the cats there was no evidence of any transmission of the virus.

In another rescue centre records indicated that from five FIV positive queens with 19 kittens all 19 kittens tested FIV negative which suggests that vertical transmission had not occurred.

Obviously, this study does not categorically state that transmission will never occur between cats and between queen and unborn kittens but it strongly suggests that transmission is very difficult for this virus and rarely occurs.

The fact of the matter is that when transmission is through a cat bite (whereupon the saliva which contains the virus is injected into the receiving cat) it has to be said that bites of this type in multi-cat households and in cat rescue centres are obviously very rare and if they can be avoided through proper management then there will be an almost zero possibility of transmission between cats it seems to me.