The decision as to whether you should let your cat go outside is entirely based in practicalities and the answer is NO unless they are leash trained and on a lead or inside a custom built enclosure or catio. 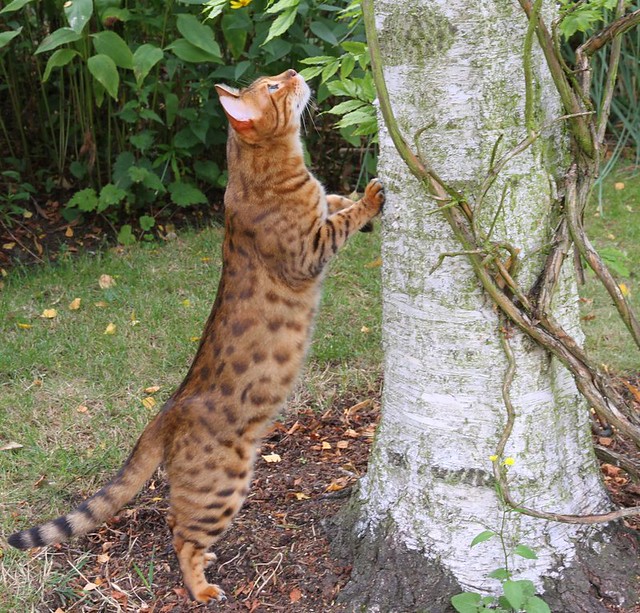 Daniel an F3 Bengal cat outside and barely supervised. This is in London. UK. Photo: Michael

The reason is pretty obvious and simple: the well-bred Bengal cat is a stunning looking wildcat hybrid. The best examples are standout cats and the higher filial ones look and behave a bit wild. Plus they are fairly expensive on a purely commercial consideration.

The point is that a Bengal cat wandering around the neighbourhood is wide open to being stolen in the first instance and fair game for some people to be trapped or shot at. Some people don’t understand the cat breeds. There have been many examples of a similar wildcat hybrid, the Savannah cat, being shot dead by John Doe because they thought the cat was a dangerous wild cat on the loose. These shootings should be taken as a warning to all wild cat hybrid owners not to let their cat outside unsupervised.

When these exotic cats have escaped their homes they can become news for local online newspapers. People take photos and try and spot the cat. Potentially, this exposes the cat to more danger as it generates excitement which attracts the bad guys.

And you can’t supervise a Bengal cat outside unless they are on a leash especially the F1 to F4 Bengals as these are more wild than the standard F5 and below cats who are genuine domestic cats. They are fast and more energetic than standard moggies.

Bengal cat outdoors. I think that cat guardians of Bengal cats have a heightened responsibility if their cat goes outside. Bengal cats are very active, fast and highly inquisitive and they look stunning making them vulnerable to being stolen. Picture in the public domain.

Theft is the big danger. After that there are the other usual hazards such as being attacked and eaten by a predator (in the USA). In the UK there are no predators to the Bengal cat except a large fox and a small Bengal cat but that would be rare. I am primarily referring to the USA in this article.

Another major hazard for an exotic looking Bengal cat would be the cat hating individual whose eye is attracted to a beautiful cat on the loose outside. He’ll be motivated by that eyeful of glorious cat to destroy it by poison or shooting. It’ll be almost like sport hunting a wild cat in Africa for some people who love their guns and who enjoy killing animals.

For me it would be inconceivable to let a Bengal cat go outside unsupervised but, as mentioned, it has to be carried out properly. When I was living in an apartment a friend of mine adopted an F3 bengal cat. He lived on the third floor. Every now and then he took his cat outside into the communal garden. He let his cat roam freely in the garden which was open on all sides with a busy road at the front.

Once his cat was outside he went mad with excitement and disappeared. His owner was always chasing after him or searching for him. It was totally dysfunctional and plain dangerous for the cat. The cat was lucky to survive. I don’t believe an F3 Bengal cat is suitable for a small 2-bed apartment on the third floor. There are many far more suitable cats, purebred and random bred for that lifestyle.

You can’t let your Bengal cat go outside unsupervised.