Cat abuse, in one form or another, is fairly widespread. It doesn’t have to be the kind of abuse that hits the headlines, such as air gun shootings or cruelty of the worse kind: Worst Animal Abuse Case Ever! (opens in a new tab/window) – where the children and dogs where also treated cruelly which tells us a bit about the link between animal and human abuse.

It can be day to day neglect or the occasional beating by an irresponsible owner. The owner could be depressed or ill and therefore irritable and passes that on through neglect and violence. Or the person could just be plain bad having been abused himself, perhaps. It is sadly part of the human condition.

In many parts of the world cat abuse is a crime. I have compiled some pages on Cats and the Law, which covers the laws on animal abuse in a number of countries. The world has a long way to go before it can be considered truly civilized in respect of our relations with animals.

The United States is becoming better at penalizing cat abuse. The laws are generally effective and similar to those in Europe. I am not sure how effectively enforced they are, however. There is probably room for improvement in enforcement. There is a disparity within the states. According to the Animal Legal Defense Fund (ALDF) the five American states with the best animal welfare laws are: California, Illinois, Maine, Michigan, Oregon. The worst five are: Arkansas, Idaho, Kentucky, Mississippi, North Dakota. The rest are in middle ground. (see Cat Cruelty Laws USA). In the UK there is a low conviction rate.

Here is a map courtesy ALDF, showing the best and worst US States for animal legislation and which is reproduced with their permission:

This is a larger version and a bit easier to read:

Here is the worst and best five in words thanks to the Animal Legal Defense Fund (ALDF):

There is one aspect of North American life that surprises people in Europe and which might be described as legalised cat abuse – the declawing of cats. This is treated as a crime in the UK. It is mainstream veterinary work in North America. How strange is that?!

Cat abuse and general animal abuse is a precursor to possible abuse of a violent kind against people especially family members. This makes it very important to us as well as to the cats and animals. In the USA counseling orders can be made as abusers are often mentally disturbed people. Sadly, it is often too late to alter behavior in my opinion.

Cat abuse takes the form of neglect or violence. Specifically it might be that the cat was weaned too early causing maternal deprivation, or social isolation, a failure to experience proper learning experiences, physical restraint (e.g. caged), verbal or physical punishment (e.g.yelling or beating), improper care and maintenance and deliberate, reckless or careless infliction of chronic stress or pain.

When this occurs against a kitten it may well cause permanent psychological damage as would be the case if it happened to a young person. These cats may never bounce back and integrate into human society; the world into which the domestic cat must integrate if it is to survive. Abused adult cats can be rehabilitated. They will be nervous of people, withdraw and become depressed. They can become overly defensive, hissing at almost any approach (my stray cat did this at he outset, for example). What to do?

From personal experience, patience is probably the number one requirement. I made a post on taming wild feral cats which is along the same lines. A damaged cat should be dealt with gently and we should make him/her feel needed. A quiet voice is an obvious starting point. The cat should be given plenty of time to become used to the environment and us. They use smell extensively so they should be given time to get to know our smell and for them to deposit theirs on surrounding objects and us by rubbing against them.

The surroundings should be safe and secure and the cat should be able to achieve a positive result, e.g. asking and a receiving food. Toys, teases and catnip can create a friendly and fun environment. Sometimes teases can be frightening to a frightened cat, however.

Dr. Jon of PetPlace advocates what he calls “a reverse dominance” program, which the cat becomes the boss and gets his way. This builds confidence and makes the cat more relaxed. In fact cat clicker training can be employed when appropriate.

The rest is really a patient non-intrusive approach to gently build a bond and a friendly pleasant environment, where the cat feels comfortable. Once the basics are in place therapy to acclimatize him/her to feel comfortable with the things that caused discomfort in the first place, can be introduced. Rehabilitating cats that have suffered cat abuse is all about patience and time. See How to Tell Cat Abuse.

Cat abuse can be entirely legal and authorized in another way – animal testing for cosmetic companies etc. 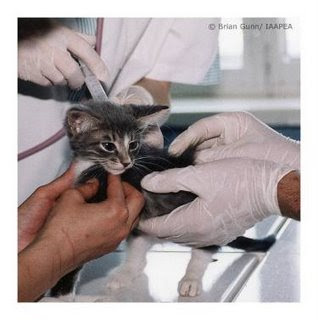 Photo by Brian Gunn with his permission.

Eight Cats Shot In The Head

Pets Are Freezing To Death This Year!

Professional Laboratory and Research Services in N.C. must be closed