Overview: Cats treat cat toys as prey. This is what makes them play. The more a toy looks and behaves like real prey the less bored a cat will become. Toys that gradually disintegrate (die) are more likely to motivate a cat to persist and therefore become less bored…..

Domestic cats are renowned for becoming bored with toys.  The question is why?  If we know why we may be able to buy our cat less toys or better toys.  Our cat would be able to enjoy his toys more and play with them for longer.  That is the theory anyway. 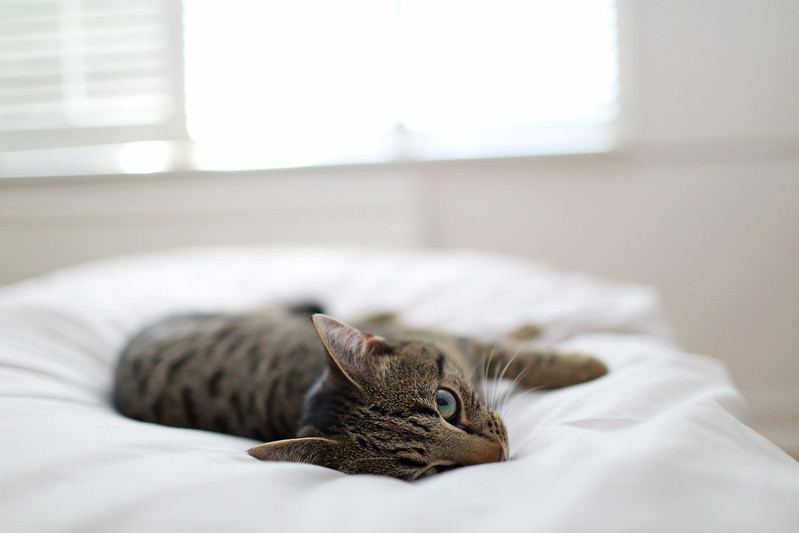 The picture above is of my cat, Gabriel, after playing.

In 1992, John Bradshaw did some experiments in conjunction with his graduate student, Sarah Hall, to try and find out how the domestic cat relates to toys. He asked the question whether they play with toys as a form of amusement, as a child plays, or do cats play with a far more serious intention at heart namely, hunting?

On the face of it, to experienced cat owners, the answer is fairly obvious because cats play with toys in a way which strongly indicates that they are attacking prey. However, Bradshaw went into the topic in more detail.

Bradshaw’s experiments found that habituation is the main reason for a domestic cat becoming bored when playing with a toy.  The experiment concluded that when cats were presented with a mouse-like toy they treated the toy as a genuine mouse and played intensely at first but many of the cats stopped playing within about two minutes.  When the toys were taken away for a while and then re-presented to the cats they started playing again but the play lacked the intensity of the first session and the sessions were shorter.  On the third try, the cats barely bothered to play having become bored with the toy.

In order to rekindle interest the colour of the toy was changed.  The cats would start playing again with interest. This proved that the cats were bored with the game that they were playing rather than the toy itself.

Tests found that cats think of toys in the same way they think of prey. This is unsurprising.  Cats prefer mouse-sized toys which are furry, feathered or multi-legged (spiders).  Even cats who had never seen genuine prey (indoor cats) were attracted to toys that replicated prey indicating that the interest was hardwired into their brains.

When rat-sized cat toys were presented to cats they were more cautious than when playing with mouse-sized toys. Instead of holding the toy in their front paws and biting them, most of the cats would hold the rat-sized toys at arm’s length and then claw the toy with their hind claws.  The cats were treating the toys as animals and were taking precautions against the larger toy in case it hurt them.

Does a cat’s appetite effect his interested in playing?  As cats see toys as prey, when they are more hungry they should be more interested in playing with a cat toy.  If they play with toys for amusement purposes then being hungry might stop them playing because they would be more interested in seeking food instead. The testing found that if cats were hungrier they ‘hunted’ with more intensity and became more inclined to take on larger prey and therefore larger toys.  If a cat’s meal is delayed, he is more likely to play more intensely than normal with a mouse-sized toy.  He might bite the toy more frequently, for example. Also, cats who initially did not like playing with a rat-sized toy were prepared to attack it (play with it) when they were hungry. This served to confirm perhaps what most cat lovers already believe, namely that cats perceive their toys as prey and then attacked them rather than played with them for amusement. However, many cat owners still believe cats play for fun.

Going back to the reason as to why cats become bored when playing with a toy but don’t appear to become bored when they are genuinely hunting, the reason or at least part of the reason would seem to be that cats are unable to kill most toys.  Therefore they become frustrated and bored.  If, however, a toy mimicked genuine prey, it was more likely to continue to interest a cat.  The only way a toy can mimic real prey is if it fragile enough to allow the cat to rip it apart which indicates to the cat that it has changed.  It was found that it was important to cats that a change had seemed to have occurred.

Not only do domestic cats perceive their toys as prey (and so they hunt them), their behaviour is controlled by four “mechanisms”.  One of these is hunger which makes a cat more likely to play with a toy.  The second mechanism is triggered by appearance, smell and sound.  This is a reference to fur, feathers and legs, for example. The third mechanism concerns the size of the toy.  Cats treat large toys more carefully than small ones because they believe that the toy is capable of fighting back and hurting them.  It seems that most cats don’t learn that the toy is incapable of fighting back.  The fourth mechanism is, John Bradshaw says, “the source of the cat’s apparent frustration.”  When a domestic cat spends time and energy in biting, clawing and subduing prey without any effect he will decide that it is not a meal or that it is difficult to kill.  But if the toy disintegrates or it is taken away and a different coloured toy replaces it, this replicates the early stages of a genuine kill thereby encouraging the cat carry on. He is less bored.