Hi Everyone, Just thought I’d show and tell some artwork again. Sorry it’s been awhile. The pic below, is a photo I made of Cassy and Tiger two years ago. Cassy always loved to spend time in my ex. room as did Tiger. Often used to think they developed a special friendship. With being the only tabbies in the house. Tiger misses her deeply, as only. Just now accepted Jasmin 6 weeks later.

Page made with various items I buy, I love the cat themed kits.

Photo of Rebel my orange/red/cameo tabby. Rebel always loves to stretch right out on the Bed. Here’s a pic of him doing just that. As you can see he blends in well, very well with the Orange Colour

Made with kits vie bought from cat themes.  Most of you have heard me talk about Rebel. He’s very talkative, always likes to complain about things. His favourite activity of course is sleeping above all else. As well as food. He’s very sensitive and love deep pressure patting though only accepts them from mummy.

Ozzie & Jasmin, they love playing together most of the time.. I Never thought Ozzie,would ever get along with Jasmin. He surprised me one day, when he gave that look that he accepted jasmin being there. From that moment on, They have both been actively play fighting with each other. I really am sure he’s teaching her a lot also I’m sure he’s catching mice  and rats for her to play with.

Jasmine is really different to any other cat I’ve had before. I surelly cant remember Cassy being like this. Excuse the blue colour its often hard to catch them while they are playing. Im still getting used to using the camera with its many features.

Ozzie is rescued is black and white mostly apart from in some time in the year when his black fur goes red/brown. He has longhair, and is fine. So have lots of Matts at various times in the year. In these pics I managed to catch him as he doesn’t like his pic taken. Ozzie is about 2yrs a great Companion friend for Jasmine they play forever with each other. He has a cute squeak noise. He loves cuddles with my ex as he snuggles him tightly.

When I was around 5ish or perhaps earlier. Had a family cat called Cassiopeia She was a Dark Torti- shell she was a shorthair I know its probly abit hard to see. The photo was taken when I was about 5 on my first day of school. Now that I look at her she reminds me a lot of Jasmin. It will be interesting to see if she turns out fluffy or shorthair. She sadly got run over when the family moved down to Oamaru from Christchurch, we previously lived in Christchurch till I was 12. Think she was about 10yrs old. She had a tendency to be quite grumpy if she didn’t get fed at a certain time. She loved sitting on laps and sleeping in mum & dads big Vegetable garden. That’s all I can remember from that time of my life.

Special Page Made for Michael 😉 – Page made with special filter in craft artist. Just love the way Charlie is totally relaxed and love the colour of those eyes. I like the word art all you need is Love and a cat or cats!!

Love the colour of this Special Kitty love the Smokey colours, love that look in the centre pic. 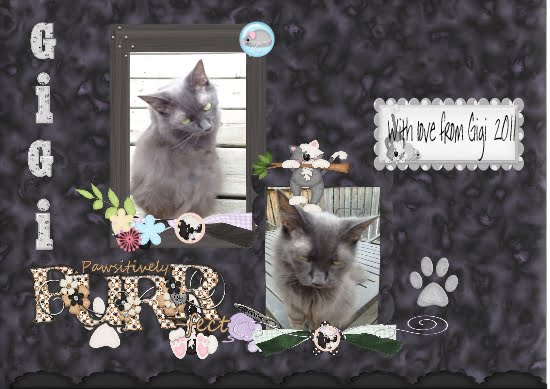 End of Part one. Hope after weeks of sad kitty articles this helps see some happy and beautiful cats If anyone wants thir kitty scraped im happy too.

Ill next be doing some photos of jasmin.