The Tiffanie is published with the express permission of the author and is a cropped version to fit this format.

A number of the links below open a new window and go to a blogger site.

Mosaic of color pigment; eumelanin and phaeomelanin. The amounts are determined at the embryo stage. Colors: chocolate, cinnamon, blue, lilac or fawn tortie (the last 3 are diluted). The preferred pattern is evenly distributed with good delineation between the colors. The nose streak (blaze) is desired. Tortoiseshell cats, Black Tortoiseshell cats. 2

Tabby  – mackerel is one type 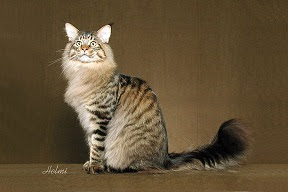 Tipped – black smoke is one type

This cat color and pattern relates to the fact that the individual hairs are colored at the end, the tip.The lower portion of each individual hair shaft lacks color color due to the inhibitor gene and it is thought, another gene. The amount of the tipping dictates the type either, smoke, shaded or chinchilla. See-Black Smoke Maine Coon
4

Silver – spotted is one type

We all know the Siamese and the pointed coat. Pointing means that the “points” of the body (i.e. extremities, the mask, ears, tail and feet) are darker. There are many variations of pointing, which can be seen here: Cat Coats Pointed.The cat on the left is a Modern Siamese with the classic seal pointing. 6

The Solid and White cat is a solid colored cat with the white spotting or piebald geneproducing the white areas by preventing the migration of the pigment cells during the embryonic stage.The cat on the left is a black and white Cornish Rex.See: Cat Coats Solid and White 7

These are called Calico cats in the USA and as a less technical term in the UK and elsewhere. Tortoiseshell and White cats are, as expected, the result of the presence of the genes that produce the tortie mosaic together with the white spotting genementioned above.This post covers it all: Calico Cats. 8 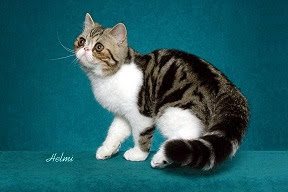 Golden shaded and white is just one example of a tipped cat color and pattern. The cat illustrated is a golden shaded Australian Tiffanie cat called Gastonne.Tipping, as mentioned, is caused by the inhibitor gene. The white areas are caused by the piebald gene.10

I have already mentioned the silver coat color and how it is formed. In the silver and white cat color and pattern (and curled hair!) the silvered hair is affected once again by the piebald geneto create the white areas.The featured cat is a silver laPerm, one of cat breeds with curly cat coats.
11

You can see how the points, the extremities of this Snowshoe cat have been rendered white by the white spotting or piebald gene.See: Cat Coats Pointed for a discussion on the genetics of pointing and this page: Snowshoe cat for more of this very interesting looking cat.

There are no white cat breeds, incidentally. Update: there is one: Khao Manee!

From Cat Color and Patterns to Home Page