Cat flaps (cat doors) can indeed make homes vulnerable to a burglary. They are a weak spot, if you will, in a home’s defences against burglars. The same of course applies to dog flaps. 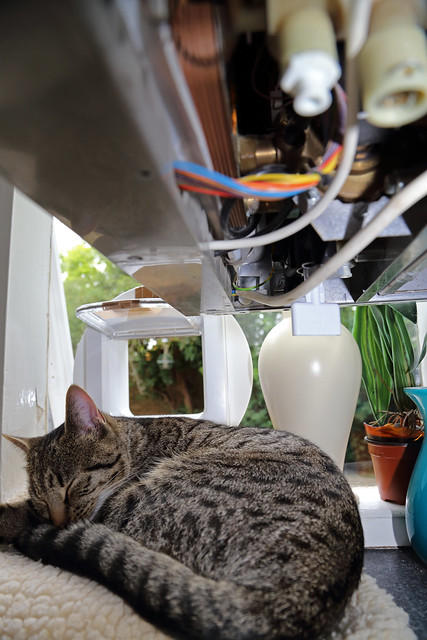 The photo above shows Gabriel sleeping by his cat flap in the kitchen window near the boiler. The cat flap is jammed open despite being operated by Gabriel’s microchip because he can’t learn to use it! This makes for a weakness in my home’s security that I am aware of. I take precautions but Gabriel will have to learn to use it.

There are several ways that a cat flap can expose a home to a burglary, at least potentially. For instance, say you leave the house keys about 6 feet from a cat flap on a shelf. If the cat flap is not one that operates by sensing a microchip in your cat then a person can reach through the cat flap with a stick or a specially made device and have access to the keys even when they are a good distance from the cat flap. Even if it is microchipped operated it can forced open.

Alternatively, if the cat flap is in a door that leads out to the garden and is therefore in the back door to the house; some homeowners may casually leave a key inside the lock of the door on the inside. They lock the door and leave the key in the lock. A burglar can reach through the cat flap and using a stick can twist the key out of the lock and knock it on to the ground and then drag it towards the cat flap with the stick and then pick it up. Access can then be made by using the key to the door in the usual way.

If the cat flap is in a window and the window locks are not that secure or are missing, then it could be relatively easy for a burglar to gain access through the window.

An alternative to the above occurred recently in the UK when a homeless person gained access to a house that was empty but on the market. He had broken into the home by pulling off the cat flap then removing a panel in the door. He became a “squatter” (an illegal occupier) for four days and almost ruined the sale of the house.

You can see where the weakness comes from. Sometimes when cat flaps are fitted to doors the fitter puts a wooden panel in the door where there was once glass. They then fit the cat flap into the panel. The whole structure is a weakness over the original door panel which may have been reinforced glass. You can put a cat flap into glass but the glass has to be toughened and it is a more expensive process.

It is advisable to be aware that cat flaps are a weakness in household security. Keys should be a sufficient distance from the cat flap to make them inaccessible. In addition, they should not be visible from the cat flap. The cat flap should be in a strong panel, either toughened glass or a wooden panel that is fitted into a door to a high standard with security in mind.

P.S. — Dee, a regular American contributor has commented that cat flaps allow access to a person’s home to wildlife such as squirrels or raccoons. They can damage the home.

P.S. This is an example of how animals coming in through the cat flap can cause damage! Mind you I think this raccoon is semi-domesticated.