30th March 2010: Cat food is ant food if you are in Australia fighting the plague of cane toads that, incidentally, were introduced to Australia by Australians (from Hawaii in 1935) to try and control beetles on sugarcane plantations. The plan failed and there are now millions of cane toads attacking native species across Australia with their poison.

And lets be clear, Australians don't like their native species attacked by foreign toads even if they did import them.

Neither do Australians like feral cats because they too attack native species. Sadly Australians don't understand that the human also destroys native species through the destruction of forests, the building of roads, and all manner of human activity. But we won't talk about that. A recent story about how cats destroy native Australian species is the one concerning the Savannah cat: Savannah Cat Ban in Australia in Wrong 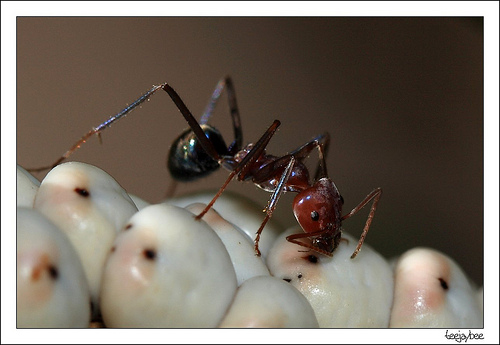 A novel way of killing the cane toad is to place cat food near ponds (billabongs) where young cane toads emerge. Meat ants are attracted to the cat food (this is a good way of using cat food waste).

Meat ants apparently like cat food although it is hardly meat in the conventional sense. Meat ants are also immune to the poison that is emitted by cane toads that attacks the heart of predators (predators of the cane toad, as I understand it).

Up until cat food cricket bats and golf clubs were used to club them to death!

Clearly this is a novel way to kill imported toads and preserve native Australian wildlife. I wonder what type of cat food they use?