I have one report on this and it is not that well written so it is rather tricky to report it myself. Nonetheless it is quite interesting and unusual. Please comment if you can clarify or add to the report.

Volunteers who act as foster carers of rescue cats provide a good service as they expand an animal shelters operation in a flexible way. They are nearly always reliable people and animal lovers.

A 29-year-old woman, Samantha Valentine, from Watervliet, New York state, has been accused of selling the cats and kittens in her foster care without the permission of the non-profit for which she worked, Kitten Angels.

She is also accused of failing to properly ensure that the kittens that she sold were checked by a veterinarian and in good health which resulted in some of the kittens dying shortly after their sale to buyers.

Valentine had permission to foster care the kittens but not to sell them from Kitten Angels. She achieved the sales by fraudulently using Kitten Angels’ documentation on the sale of the kittens. It appears that she wanted to start her own rescue business without all the usual overheads and organisational issues.

Twelve cats and two dogs had remained at her residence and they have now been removed under a court order, as I understand it.

We would also like to thank Mohawk Hudson Humane Society and “Kitten Angels” for their cooperation and assistance in the investigation, which had a direct impact on our ability to bring the suspect to justice.

Comment: This is the third cat foster care scandal I have reported (see one of the previous ones). It is clear that foster care applicants need to be thoroughly vetted before being taken on and closely monitored until they are considered trustworthy.

Kitten Angels operate in association with Mohawk Commons Mall which is not that far from Albany, NY state and on the outskirts of a town called Schenectady.

This is a bittersweet story from Alley Cat Allies. According to their Facebook page, Thomas was rescued in early December ...
Read More
One month of excellent foster care and this young cat is transformed and adopted 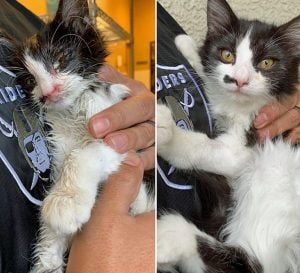 These comparison pictures of a young cat taken soon after what must have been a rescue and one month later ...
Read More
How does a cat foster carer say goodbye to a kitten like this?

The relationship is bound tightly with deep feelings from both sides. How can you break that just because you are ...
Read More
Feral cat survives 3 weeks in container from China to Vancouver and is being rehabilitated

This cat, who has been appropriately named Journey by her carers, must have been completely feral when she tiptoed into ...
Read More
Cat foster carer deceitfully gave two cats to a cousin, a known cat abuser, who allegedly gave one heroin and abused her

Sudbury, Ontario, Canada: This incident is currently under investigation and the people concerned have not been named because the cat ...
Read More
17 foster cats killed in house fire

NBC12 reports that seveteen foster cats have been killed in a fire at the home of cat foster carer, Shannon ...
Read More
Mr. B placed with foster family that ‘hasn’t just dealt with these issues in other cats, they have embraced them’

According to an update by Morris Animal Refuge, Mr. B, a 26-pound kitty up for adoption at a Philadelphia-based rescue, ...
Read More
Please comment here using either Facebook or WordPress (when available).