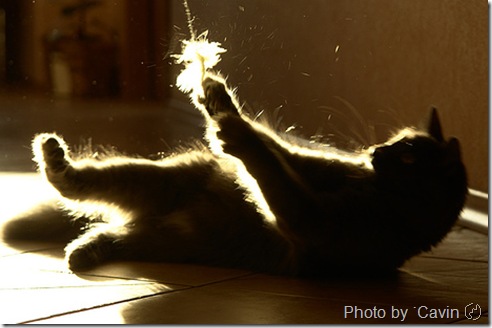 One of the easy cat games to play – piece of string with something on the end. This mimics predatory behavior.

The problem is not deciding what cat game but actually playing them. The simplest are the best. We don’t have to spend a lot of thought on what cat toy to buy. We can make one. In our busy or distracting lives we fail sometimes to play enough with our cat. I know; I am one of those people.

If we are to decide which cat games to play, it seems to me that we need to know what a domestic cat’s normal behavior is when reverted to a wildcat. This is because all play is a substitute for what a cat would normally do if the cat was living under more ‘normal’ circumstances. I am not saying that living in our homes is abnormal. After all our cats are domesticated. However, they are driven by innate, hard wired, urges and instincts that come directly from their wild cat ancestors, the African wild cats of the fertile crescent east of the Mediterranean.

The domestic cat is kept in a perpetual and false state of kitten hood as we, the human companion to the cat, take over the role of mother4. The kind of play a kitten participates in is the kind of cat games to play.

There are three main types of domestic cat play:

As a kitten’s motor skills improve, exploratory play increases. ‘Motor skill’ means: a learned sequence of movements that combine to produce a smooth, efficient action in order to master a particular task1.

Exploratory play is thought to be employed for the learning of essential skills for survival of:

Cat games to play: What immediately comes to mind is the classic cat tease. With this cat toy or device you can encourage kittens to jump and go places and also to practice stalking and hunting prey. The video below shows a good example of how the tease prompts the cat to catch it as bird prey:

As can be seen, a cat tease is usually a long bird feather on the end of a stick. But other objects can replace the feather. The feather, though in my experience is the best. The more fancy ones can distract and scare a cat.

Social play is play between cats of a social group be it family or close unrelated cats. It starts at about 3 weeks of age and goes on to about 7 weeks of age when object play takes over.

Social play is about a restricted or an inhibited version of what will happen when the kitten in an adult and has aggressive encounters with other cats or is hunting. The kind of games that kittens play between each other are:

Cat games to play: as part of the kittens socialization skills some of this social play involves people. So a little bit of judicious rough and tumble would seem to be in order. This form of cat play can incorporate object play.

Object play is the one form of cat/kitten play that most naturally lends itself to cat games to play.

We often prevent a cat from hunting. The cat might be a full time indoor cat for example. The cat’s hard wired desire to hunt is undiminished, however. How to satisfy this desire?

In kitten hood, once they have sufficient hand to eye coordination, they start playing with objects. After 7 week of age object play increases3.

Object play includes the sort of actions that a cat would use when catching prey. With an object, a kitten will:

As mentioned most cat toys are designed to allow our cat to express their natural desire to chase prey, hunt and be aggressive

The best and usual type of object play is one which mimics fearful prey trying to escape.

There are a plethora of cat toys that do the job. The basic ones, the simple ones are as good if not better than the battery powered or remote controlled ones.

2. Martin P and Bateson P – The ontogeny if locomotor play in the domestic cat – referred to in The Cat, Its Behavior, Nutrition & Health by Linda P Case.

3. The Cat, Its Behavior, Nutrition & Health by Linda P Case.

5. The Wild Cats Of The World by the Sunquists

From cat games to play to home page