A fully illustrated page on the self, tipped, shaded, smoke and ticked (tabby) cat coat hair strands and the positioning of pigmentation which is called melanin (eumelanin). Melanin is created in pigment producing cells called melanocytes in the skin. Their operation is dictated to by the genotype of the cat. Here are the various hair strands.

A few words to add to the drawings above. Firstly, there is a page on the type of hair strands referred to in the images on this page.

We all recognise the self-coloring. It is better described as a solid coat. So, for example, a black cat would have such a coat. Of the cat breeds the Havana Brown has a solid chocolate colored coat as one example of many. All self-colored cats possess the non-agouti aa genotype.

The best-known ticked cat breed is the Abyssinian and the long-haired version, the Somali – a ticked tabby. You see what is called a ‘salt and pepper’ appearance in the coat. Finely fragmented. Here is a Helmi photo of a random breed ticked tabby cat:

There is little overall coat pattern but you still see the tabby M mark on the forehead. Classic, spotted and striped tabby cats have the same individual hair strands but there is also an overall pattern formed which is due to the top of a group hair strands forming a shape and having dark pigmentation. The dark pigmentation is eumelanin and the lighter pigmentation is phaeomelanin. This is the work of the agouti gene.

Here is an example of a classic tabby, which happens to be a splendid Maine Coon:

An excellent example of the smoke coat can be seen a picture I used before of Quin, a Maine Coon living with Helmi Flick.

And below is Richie, an astonishing Maine Coon. He is a massive celebrity on the internet as you might imagine. I talk about him in another page – please click this link to read about him.

Orlando below is a red shaded traditional Persian living in the Netherlands:

The Burmilla is called the ‘Asian Shaded’: 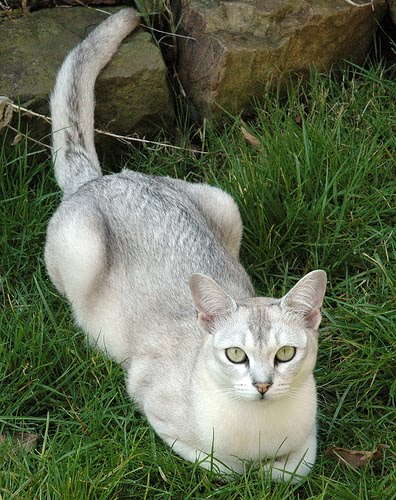 Below are some more articles on cat fur.

How many hairs on a cat?

In 2018 Narnia hit the internet celebrity scene. He was the latest "two-faced" feline at that time and different because ...
Read More

Birds can use cat fur to build nests

It's the bird nest building season (Feb-Aug) and I have just learned that domestic cats can contribute to the welfare ...
Read More

What is cat fur made of?

Cats are more influenced by changes in ambient light than changes in seasonal temperatures with respect to shedding fur. Cats ...
Read More

This is a cool picture of water resistant cat fur. The cat appears to be a Bengal and he's fascinated ...
Read More

What is a cat ruff?

The picture explains what a cat ruff is and where the word comes from. As usual cat breeders like to ...
Read More

What are britches on a cat?

People ask about britches on a cat. The use of language concerned with Western clothes and applying it to the ...
Read More

The cat's owner, Jamie Maietta, says that the commercial pet groomer skinned her cat alive when all he was in ...
Read More

The purpose of hair between the toes of a domestic cat is, I suppose, obvious.  It has to be there ...
Read More

Hair is mainly made up of keratin. It is the same material that a cat's claws are made of. Keratin ...
Read More

Murderer owned a ginger cat and that fact helped convict him

USA: The victim of a grisly murder was almost decapitated and he was severely beaten but he had a single ...
Read More

How to Select a Proper Maine Coon Cat

This is about selecting a proper Maine Coon cat. I have picked out five major Maine Coon appearance characteristics which ...
Read More

Uhmm, we had painted cats. We have lion cuts. Now we have something between the two: fancy feline haircuts. My ...
Read More

Colonel Meow, one of the most famous internet cats in the world, died January 29 after a brief illness. He ...
Read More

Ulysses, the ginger tabby cat who is a co-star of the new Coen brothers film about music is in fact ...
Read More

Here are some extra pictures of two Highlander cats that I have on my computer which have not been published ...
Read More

Occasional feline skin twitching is a signal that a cat dislikes something that is happening at that time. It can ...
Read More

You can do useful things with cat hair that is lying around the house; floating against skirting boards, on the ...
Read More
Please comment here using either Facebook or WordPress (when available).