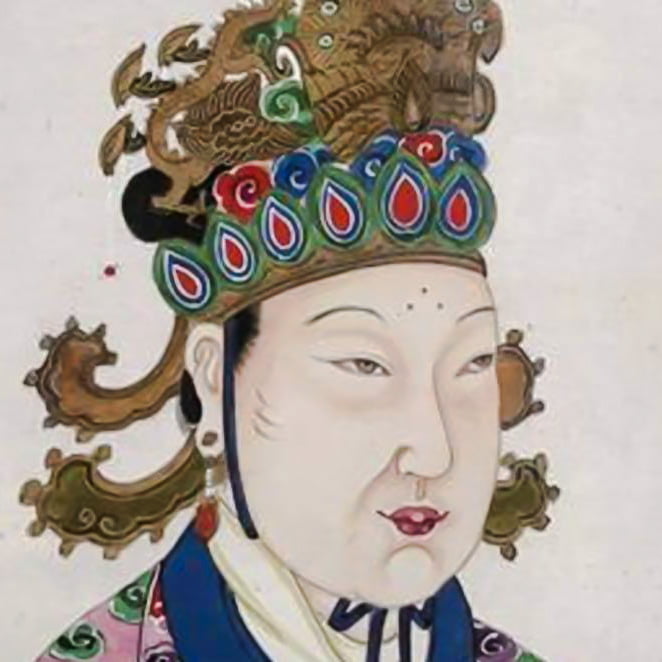 Wu the only female Emperor of China. Image in public domain due to lapse of time.

First things first, there is a difference between cat-haters and ailurophobes. The latter have a fear of cats which might lead them to hate them but it might not. The former genuinely detest cats for whatever reason. The reason for being both may be the same e.g. a bad experience with a cat when a young child.

One of the world’s foremost cat-haters was Wu Chao, China’s only female Emperor.

Like many others, I had never heard of her until I was doing a bit of research about cat hating. There are a number of high-profile cat-haters such as Pope Gregory IX, the person who initiated the feline Holocaust in Europe which continued right through the Middle Ages and beyond.

Wu Chao was a concubine to Emperor T’ai-tsung. She became intimate with his heir Kao Tsung at the time of the Emperor’s death in 649. On the death of the Emperor she had to enter a convent but she frequently received visits from the new Emperor leading to a return to the palace as his favourite concubine. She set about eliminating rivals including the then current Empress. She rose to the position of Regent of China, ruling in place of her young son Chung Tsung. She then replaced him with another son Jui Tsung. By 690 she had deposed Jui Tsung and become Emperor of China. She was the first and only woman to occupy that office in Chinese history. She was forced out by her generals and ministers on December 16 705 which was shortly before her death.

Wu, a cat-hater. Image in the public domain.

THERE ARE SOME MORE ARTICLES ON CAT HATERS AT THE BASE OF THE PAGE.

John Clements in his biography said that she schemed, seduced and murdered her was to becoming a living god. The picture above is from his book.

It is said that she hated cats and had them banished from the palace. She had a special reason. A lady-in-waiting who she had condemned to death took her revenge before she died. She issued a threat that in the afterlife she would turn the Empress into a rat. The lady-in-waiting would then turn into a spectre cat to hunt down the rat that was once the Empress and torment her.

There are various names on the Internet for this special woman. It’s a bit confusing. The spelling is different too. For example, Wikipedia states her name as Wu Zhao but commonly known as Wu Zetian or alternatively Wu Huo and then during the later Tang dynasty as Tian Hou. You can see what I mean.

She was considered to be one of the most powerful women in history. At the time women were normally relegated to the family home and so her rise to power was extraordinary. She was intelligent, wily and ruthless in managing to rule for 15 years. She ruled competently and effected social change that affected Chinese society for centuries.

She challenged the patriarchal system by advocating women’s intellectual development and sexual freedom. She was born to a newly emerging merchant family in the north-east.

Source for cat-hating: Dr Desmond Morris in Cat World. Other sources are various including: Your Dictionary.

SOME MORE ON CAT HATERS:

What do you call someone who hates cats?

There is no single word in the English language to describe someone who hates cats. However, you probably know that ...
Read More

Tom O'Connor has written an opinion article on stuff.co.nz about a proposal that domestic cats be banned from a 105 ...
Read More

Why do cat haters, who have never owned a cat, fail to realise the comfort that a cat can bring to your life?

The short answer is that there is a blindness and a lack of open-mindedness amongst cat haters which translates to ...
Read More

Why do I hate cats?

You could write a book in response to the question "why do I hate cats?" It is a very complicated ...
Read More

Woody lives at the end of a cul-de-sac on Shaman Road, Galveston, Texas, USA. Woodsman001, aka "Woody" (named as such ...
Read More

Abolition of cats, as a sanitary and health protecting measure is now imperative. Cats have no place in the world ...
Read More

Is there is a link between misogyny and cat hating? I sense there might be. Misogyny means women hating. Cat ...
Read More

British Gardeners Hate Cats as Much as Plant Lice