Introduction: [go straight to behavior during heat] This page applies to domestic cats.

Wild cats behave similarly but there are species to species variations. Although the queen goes through four phases in her estrous (estrus) cycle, it is during, ‘heat’ that she is in the estrus period. The other phases are called ‘anestrus’, ‘proestrus’ and ‘interestrus2‘. The queen is receptive during estrus. Unlike mammals, including humans, in which ovulation occurs spontaneously; in the cat, ovulation is triggered by the process of mating (induced ovulation). The acts of sexual intercourse causes a surge of luteinising hormone from the anterior pituitary gland that is required in ovulation1. 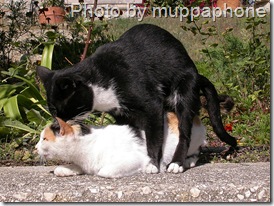 Individual cats vary in the age at which they first go into heat. The age varation is to an extent breed dependent. Siamese cats apparently go into heat (at 5 months of age) earlier than Persians (a 10 months), for example.

The reproductive cycle is activated by a number of conditions including the amount sunlight. This means that in the Northern hemisphere, the mating season starts in March and goes on until September and in the Southern Hemisphere it is the opposite (October through to April). Queens have their individual heat cycles. Sometimes during the mating season a cat will have continuous cycles in spring and less frequent cycles later on in the season2.

The queen’s behavior changes substantially. Heat lasts for four to six days. The queen calls and does so more frequently. She is louder. There is increased activity. She is more friendly towards people. This is demonstrated by leg rubbing etc. She rolls around on the floor and shakes her pelvis. As her desire to mate intensifies her cries become more intense too and she sometimes makes a sound as if (but not) in pain. These cries are calls to attract the male. They are designed to attract males that are not in the immediate area. 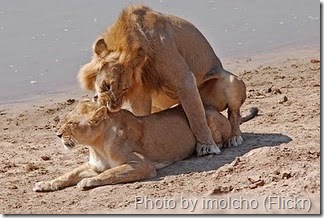 During cat heat behavior, she takes up the coital crouch or copulatory stance called, ‘lordosis’. See the picture above. In this position she crouches low to the ground. Her neck and abdomen touch the ground. Her hind limbs are extended slightly to raise her rear or more accurately the perineum (the area between the anus and the vulva – the labial opening to the vagina – in the female4). The tail is carried to one side as can be seen in the photograph above. Her hind feet might tread2.

This position can be artificially induced in the female cat in heat by holding the skin at the nape of her neck as a male cat would do when in the act of intercourse (see photo above and right) and stroking her back towards her tail2.  Or petting and touching her neck or back1.

When several male cats are present the female may show preferences1.

For the sake of completeness this section describes the queen’s behavior in these two phases. Interestrus is the period during which the female refuses to mate – a period of rest. The female will behave aggressively towards approaching males. If the female has mated but ovulation has not occured she will remain in this phase for 7 -14 days and thereafter start again with proestrus.

If ovulation has been induced during mating and estrus, but has not conceived (become pregnant) she begins a period of ‘pseudopregnancy’ that last 36 days. If she is pregnant gestation lasts 63 days – see cat pregnancy.

Proestrus is a period that lasts 1 – 3 days1 (1 – 2 days2). It is a period of courtship in human terms2. There a slight changes in behavior. The queen may become restless and seek attention. There may be increased rubbing (scent exchange) and urine spraying. She may have an increased appetite2 and make short low calls. She may allow the male to mount her but not allow mating. This process leads to the estrus phase described above.

There are hormonal changes during this period. Estrogen is produced on a signal from follicle-stimulating hormone secreted by the pituitary gland. Estrogen causes the changes in behavior described1. The vulva may enlarge slightly and be moist.

Anestrus is the fourth stage in the cycle when the female is at rest from reproductive activity. It lasts for 90 days and is from November until January in the Northern Hemisphere2 (the area of world above the equator).

1. The Cat,  Its Behavior, Nutrition & Health by Linda P Case