A cat marking territory is inherent to its character. There are two things to refer to, (a) home range and territory and (b) the methods that allow the cat to communicate to others that an area is its territory.

A cat’s home range is referred to as “the area that is used during normal daily activities”1 which includes the area where the cat hunts. The cat’s territory is referred to as the “cat’s immediate living area”1.

For indoor only cats it’s home range and territory are very similar is size. The home range encompassing the territory.

For indoor outdoor cats the home range is much larger and encompasses the smaller area that is his or her “territory”.

The size of these areas vary widely. For obvious reasons the home range of a cat living in a house is limited by the internal space of the building.

Where the cat is allowed out and is well fed the home range will typically be small, at about one acre or less. While true feral cats that are not living near a constant source of food and in sparsely populated areas can have home ranges of about 400 acres. This is still very small when compared to some wildcats.

The wildcat with the largest home range is probably the snow leopard living in a remote, isolated and rocky wilderness. These home ranges can extend to several hundred square kilometres. Depending on the individual, the domestic cat is adaptable and can live in a group or colony when necessary, sharing a home range and territory.

Please see: Domestic Cat Territory for more on this.

This is carried out in several ways. A cat marking territory is a form of communication.

The classic one that most of us know about is scent marking using urine that is sprayed horizontally against objects that are usually located near well used tracks and which demark the range. The header picture shows this nicely. See also male cat spraying. 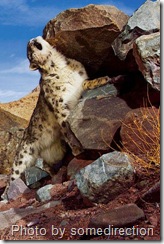 Another way of leaving scent is through rubbing objects with parts of the cat’s body where there are scent glands. The side of the face is one example. The adjacent picture of the snow leopard shows this well. Here a snow leopard is scent marking a boulder next to a well used track in the rocky hills and mountains that are its home.

A form of communication that is visual is scratching the surface of a track.

When a cat’s territory is invaded it can lead to spraying and/or fighting. The resident cat might spray parts of its home range or the invading animal. I have personal experience of this when I entered the enclosure of two servals, Morpheus and Penelope, to photograph them. The large male serval, Morpheus, sprayed me three times. It happened so fast I couldn’t get out of the way.

The odour of cat urine changes with age. This provides a more sophisticated form of communication as to the time the cat who deposited the urine was there. This avoids conflict where home ranges overlap as is the case with solitary free ranging domestic cats.

Please see the social organisation of the domestic cat for some more on a cat marking territory and from a slightly different perspective.