Do you and your cat have a nightly routine? You know what I mean, the things that you both do before going to bed, during the night, in the early hours and when getting up. The relationship between cat and person changes a bit overnight.

I always make sure the food and water is fresh for the night and I leave some dry food down too for grazing.

I have visitations during the night from a time share cat (semi-stray cat) and he likes to eat some of the old food so I leave a bit for him too.

I put some old cat food out for the urban London foxes. There is no waste cat food in this household! Everything is eaten. What the foxes don’t eat the magpies finish off and then the wasps and the flies and the ants….(you must think I am mad) and perhaps a robin will peck at some of the food too. 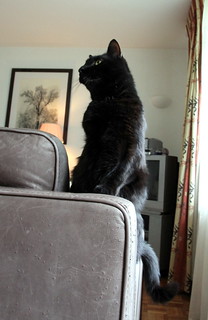 Where is my breakfast?

When I go to bed Charlie, my cat, is not usually on it. He tends to join me in the middle of the night.

He does not eat a supper but grazes during the night. He usually spends most of the night next to me in bed or at the foot of the bed against my feet so I am pinned down. He sleeps much better than me…surprise, surprise.

As I wake up in the early hours Charlie asks for his breakfast at that time. I am well trained. The routine is that I carry him from the bed to the kitchen and give him his breakfast. Just before I pick him up he head butts the base of the bed. Cute.

If I don’t respond to his request for breakfast (because I am writing something like this!) he puts his single front paw on my leg and puts weight on it. As he weighs 15 pounds, I feel that! It goes to the bone.

If I still ignore him he stands up in the meerkat position and looks me in the eye and screams at me. That works.

After breakfast Charlie goes to the toilet (outside) and then races back in, jumps on the bed (mud?!) and comes up to me for some mutual grooming. At this time I flea comb him. He loves it. He is virtually flea free. He asks for it and when I produce the comb he makes a pleasure grunt as if to say, great.

He then washes himself. He actually over grooms. But it feels nice for me as he rocks against my legs. It puts me back to sleep again…